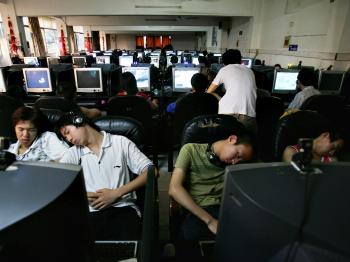 We may joke about it, but most people do not seriously consider their compulsive Twittering, or Facebook status updating, an actual addiction.

According to Facebook’s own statistics, its average user spends more than 55 minutes a day on the site. Twitter users, meanwhile, average 27.3 million text-based posts (or “tweets”) per day—a total of about 8 billion tweets since the site began in 2007.

Add to this the time spent in online gaming—World of Warcraft boasts over 11 million subscribers, and growing—and it becomes clear that much of modern life is spent in front of a computer screen.

The Internet has certainly enriched our lives in a number of ways. This technology allows access to a wealth of information, entertainment, and a connection to family and friends that was previously impossible. But when does our obsession for the Web and video games become an actual addiction, and how dangerous can it be?

In some instances, users are not merely tempted by the allure of the Internet, but by the financial gain offered online.

In countries that allow legalized gambling, this can often include more than just online poker. In South Korea, proficiency at skill-based video games such as the Xbox 360, and Playstation 3 can earn vast amounts of money.

Multi-player gaming is extremely popular in this country and is even considered a sport in which gamers are televised. Here, professional players can make over $100,000 a year and can even cultivate a large following of fans.

Young gamers from all parts of South Korea are forming or joining leagues in an attempt to cash in on the phenomenon. Many individuals spend countless hours playing video games in hopes that they may hone their skills well enough to compete. In this environment, inspiring young gamers can spend more than 30 hours a week playing video games.