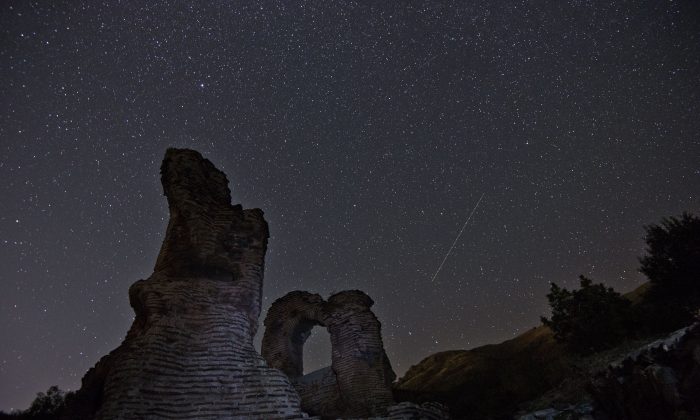 A Perseids meteor (R) streaks across the night sky over the remains of St. Ilia Roman near the town of Pirdop on Aug. 12. (NIKOLAY DOYCHINOV/AFP/Getty Images)
Science

Explainer: Why Is the Night Sky Black?

It sounds obvious. That’s what night is. The sun has set and when you look up at the sky, it’s black. Except where there’s a star, of course. The stars are bright and shiny.

But wait. Imagine you are deep in a forest. All around you there are trees. Wherever you look, you are looking at a tree. Maybe a big tree close up or a bunch of small trees further away. Surely it should be the same with stars. We’re deep in the universe and whatever direction we look in, there ought to be stars there—billions and billions and billions of them. You would have thought that they’d fill the whole night sky, with the more distant ones fainter but more numerous.

This is called “Olbers’s Paradox” after a 19th-century astronomer, although the conundrum was around for a couple of centuries before him. And the answer—at least, now—is fairly clear.

The reason the night sky isn’t just a blaze of light is because the universe isn’t infinite and static. If it were, if the stars went on forever, and if they had been there forever in time, we would see a bright night sky. The fact that we don’t tells us something very fundamental about the universe we live in.

A limit to the universe may seem a natural explanation—if you were in a forest and you could see a gap in the trees, for example, you might surmise that you were near the edge. But it’s dark on all sides of us, which would mean not just that the universe is bounded, but that we’re in the middle of it, which is pretty implausible.

Alternatively, the universe could be limited in time, meaning that light from far-away stars hasn’t had time to reach us yet.

But actually the explanation is neither of these. Light from the far-away stars gets fainter because the universe is expanding.

The Theory of Parallel Universes Is Not Just Math – It Is Science That Can Be Tested
Explainer: The Mysterious Dark Energy That Speeds the Universe’s Rate of Expansion

And this affects how we see them. Light from these distant, fast-moving galaxies and stars is shifted to longer wavelengths by the Doppler effect. In the case of these stars, the effect shifts visible light into invisible (to the human eye) infra-red and radio waves, essentially making them disappear. Indeed, the blackness of the night sky is direct evidence of an expanding universe.

So if you want evidence of the Big Bang, you don’t need the Hubble Telescope or the Large Hadron Collider. You just need your own eyes and a clear, dark night.

Roger Barlow is a research professor and director of the International Institute for Accelerator Applications at the University of Huddersfield in the U.K. This article was previously published on TheConversation.com