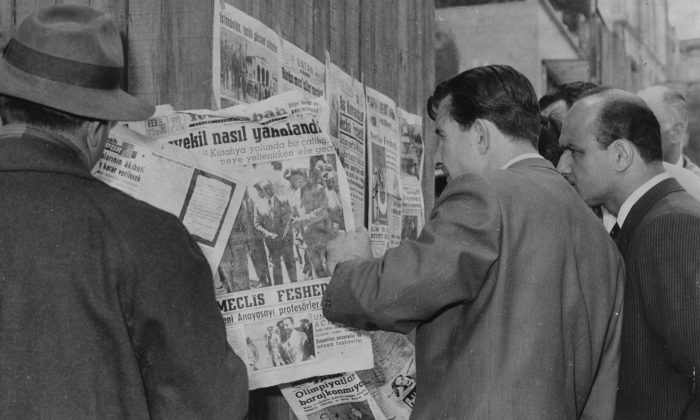 Citizens stand at a newsstand read of the capture of Prime Minister Adnan Menderes after a military coup in Istanbul, Turkey, on May 28, 1960. (AP Photo)
Middle East

Turkey plunged into chaos as forces loyal to President Recep Tayyip Erdogan quashed a coup attempt in a night of explosions, air battles and gunfire that left scores dead. Thousands were arrested amid vows the plotters would “pay a heavy price for their treason.” The Associated Press looks at Turkey’s long history of coups, its military’s prominence and why some had thought the days of military interference with government were over.

How long has the military intervened in politics?

The military staged three coups between 1960 and 1980 and pressured Prime Minister Necmettin Erbakan, a pious Muslim mentor of Erdogan who was disliked by Turkey’s secular establishment, out of power in 1997. In 2007, the military threatened to intervene in a presidential election and warned the government to curb Islamic influences, but the action backfired and Abdullah Gul, the candidate favored by a government with Islamic leanings, took office. The latest coup attempt surprised observers because Erdogan’s government had taken steps to bring the military to heel, including dismissals and prosecutions of high-ranking active and former officers for alleged coup plots. Erdogan’s government appeared to be working effectively with the military, coordinating on national security issues and confronting a perceived anti-government faction said to have infiltrated the police and other institutions.

Why would the military try to step in now?

The Turkish military has traditionally seen itself as the guardian of Turkey’s old secular establishment, a legacy of national founder and former army officer Mustafa Kemal Ataturk, as well as an enforcer of order in times of civil unrest and weak civilian leadership. While it was forced to lower its political profile under Erdogan’s government, Turkey’s military has been buffeted by a renewed conflict with Kurdish separatist rebels and bombings by suspected Islamic extremists, including an attack on Istanbul’s main airport last month that killed dozens. Erdogan has also been a polarizing leader, though he commands deep support among a pious Muslim class that once felt marginalized under past military-influenced governments.

Why is the Turkish military so important?

Turkey is a NATO member and a key partner in U.S.-led efforts to defeat the Islamic State group, which controls territory in Syria and Iraq, and has allowed American fighter jets to use its Incirlik air base to fly missions against the extremists. Turkey’s strategic location in the Mideast region, straddling the Asian and European continents, makes it a critical player in international conflicts. In 2003, Turkey barred U.S. forces from using its territory in the invasion of Iraq, raising questions about whether the politically powerful Turkish military had undercut a civilian-led initiative to help the Americans.

What do Turks think about their military?

Turks have a conflicted relationship with their military, an institution that is cloaked in the lore of sacrifice, but also tarnished as a past symbol of repression. Past military coup leaders have been seen as saviors from chaos and corruption, but also ruthless. In the 1960 military takeover, the prime minister and key ministers were executed. Torture, disappearances and extrajudicial killings were rampant in a 1980 coup. Despite that past, the military retains respect and vast economic resources. Service is a rite of passage for almost all men, who serve as conscripts. Soldiers who die in fighting with Kurdish rebels are hailed as martyrs.