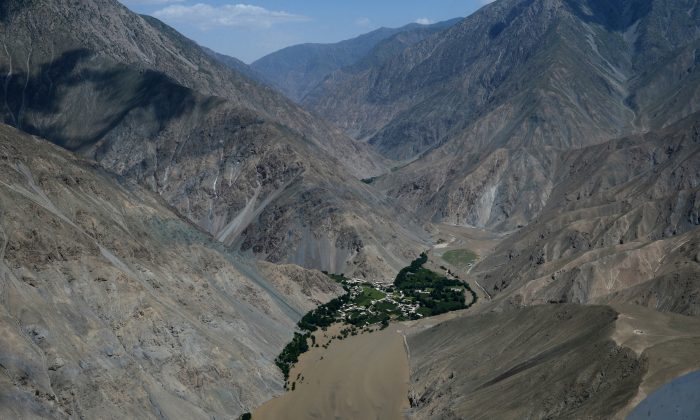 Mud from a landslide caused by flooding is seen in this aerial view of Afghanistan's Guzargah-e-Nur district of Baghlan province on June 9, 2014. Rescuers scrambled to deliver food and medical supplies to Afghan families marooned on mountaintops after flash floods killed 80 people in a remote northern district, washing away hundreds of homes and forcing thousands to flee. (Wakil Kohsar/AFP/Getty Images)
Environment

Explainer: Why Do Landslides Happen and Why Are They So Devastating?

Landslides don’t attract the same media attention as more familiar geological hazards such as earthquakes and volcanoes. And yet they can be just as disastrous and, in fact, 2014 has been a particularly bad year.

In Hiroshima, Japan, a series of landslides has left 39 people confirmed dead and a further 52 missing. In March a hillside collapsed in Washington state, US, leaving 43 dead, and in May massive mudslides in Afghanistan caused several thousand deaths. In early August, landslides in Nepal left almost 200 dead or missing.

Statistics about deaths from landslide-generated disasters can be a little difficult to come by, since some agencies group “wet” landslides with floods and damage caused by landslides generated during earthquakes are often classed as earthquake damage.

The recent Japanese landslides, for example, are mud flows or debris flows (a watery mix of rock and soil) generated from a slope collapsing further up river. Heavy rainfall had caused large volumes of slope collapse material to be incorporated into the river waters, giving the mud flows and debris flows, which have overwhelmed villages within the mountain valleys. Villages built a little further up from the floor of the valleys will be much less prone to the destructive debris flows, which occur in the base of the mountain valleys.

Landslides tend to be most frequent and destructive in steep mountainous areas, as they are an expression of a natural process which reduces steep slopes to less steep slopes. Data collected over many years suggests that landslides are ranked 7th in the natural disaster table well after the major historical killers of droughts, floods and storms, but close on the heels of earthquakes and volcanic eruptions.

Landslides generally require a trigger, most commonly extreme rainfall or large earthquakes. Earthquakes initiate landslides by locally – and very briefly – changing the gravity experienced by a slope, which tips it beyond its stability point. Extreme rainfall temporarily drives the water pressure within a slope to a critical level; the stresses within the slope then exceed their stability point and the land begins to slip down the slope. Landslides are then driven simply by gravity, often assisted by a loss of strength in the region at the base of the slide.

So parts of the world with steep slopes, intense rainfall and large earthquakes tend to be most prone to this kind of geological disaster.

But they aren’t always massive, deadly disasters. Smaller, often more benign landslides can be initiated by roadway construction, building works, river or wave/tidal undercutting of slopes. If engineers or builders mess up and make a slope too steep, it may no longer be held up by the intrinsic strength of the rock.

In the same way, apparently simple things like leaky water pipes or inadequate drainage on man-made slopes can also start landslides. This is particularly so water is either retained in, or drains particularly slowly from, the rock or soil of the slope. Certain kinds of clays are particularly notable for these features – and this seems to have exacerbated the landslides at Hiroshima.

Such conditions are generally well understood by geo-technical engineers, so can normally be predicted in artificial slopes. Next time you are on a train or car look out for adjacent slopes which have lines of gravel or rock-fill running down them to drain the water away. These have been assessed by engineers as potential unstable slopes, should the area be exposed to heavy rainfall over long periods of time.

A lack of trees can also make steep slopes more prone to landslide, since trees naturally intercept and slow heavy rainfall and their roots help bind the soil together. This is another example of natural and man-man factors overlapping – environmentalists blamed deforestation for a recent landslide in India which killed 30 people.

These facts gives clues as to how to limit landslides (triggered by heavy rainfall) on natural slopes, by managing water flow across slopes, limiting water ingress into slopes and by planting tree cover to slow water delivery into water courses and so provide natural slope binding.

The most destructive landslides of all are those that end up in water (or occur on underwater slopes) and generate tsunamis. For example, this kind of destruction can happen if a volcano flank collapses into water while erupting.

Indeed, the largest tsunami ever recorded was set off by a landslide in Lituya Bay, Alaska, in 1958. Waves reached a height of more than 500m, far taller than any skyscraper built at the time, but killed just five people in the sparsely populated fjord.

Fortunately such disasters have been very rare in human history – the 1792 Unzen eruption, earthquake, landslide and tsunami, which killed 15,000 people in Japan is a notable instance. However we know from geological evidence on the sea floor, for example around the Canary Islands, that mega-tsunamis must have been generated by similar slides – landslides that would make 2014’s crop seem tiny by comparison.

Mark Hounslow does not work for, consult to, own shares in or receive funding from any company or organisation that would benefit from this article, and has no relevant affiliations. This article was originally published on The Conversation. Read the original article.