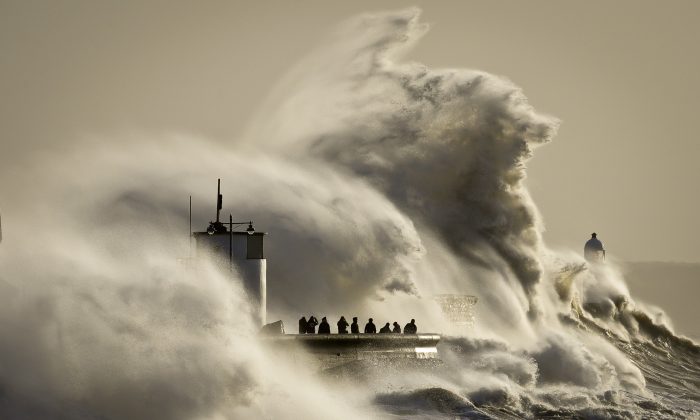 The storms which have battered the UK over recent weeks can be traced back to a strong front of contrasting temperature between particularly cold air over the north Atlantic, which has also brought extreme cold and snow to parts of the US, and warmer air further south. The strong temperature contrast across the Atlantic leads to storms forming around the front, circulating and mixing air along the temperature gradient, trying to find an equilibrium of hot and cold air.

You could think of this as like adding cold water to a hot bath, where at some point the cold water entering from the tap forms a “front” with the hot water, and must be mixed more evenly throughout the bath for a comfortable equilibrium.

So a succession of deep Atlantic low pressure systems, steered by a strong high level jet stream in the upper atmosphere, where winds are also driven by strong contrasting temperatures, has brought very wet and windy weather to the UK over the last month.

In fact the wet and relatively mild weather arriving from the Atlantic is more typical of British weather. But the depth of the Atlantic lows this winter has been unusual. On Christmas Eve as cyclone Dirk made landfall in Scotland, the the barometric pressure recorded in Stornoway on the Isle of Lewis was 936.8 millibar, the lowest recorded anywhere in the UK since 1886.

At the University of Reading Met Department Observatory rainfall has also been quite unusual. A whole winter’s worth of rain, 162.3mm, has fallen in just three weeks. Only another 1.1mm of rainfall – which looks likely – would break the record for the wettest consecutive 24-day period at any time of the year, 163.3mm recorded in late October 2000.

These very active weather depressions have wrought widespread damage and problems from wind and flooding. Winds have been strong, but not exceptionally so, with gusts of up to 90-100mph on the coast and 70mph inland. But the relentless rain has saturated the ground, and flooding has again been a major issue affecting many parts of the country. Southern and western coasts have also had to cope with inundations from the sea as, swept by the long run of strong winds across the Atlantic, strong sea surges boosted by high spring tides have challenged coastal flood defences.

So why has this winter started off so stormy, while other recent winters have been much more calm, and others frozen? Of course, the variability of weather from year to year and month to month is normal for the UK – we all know how changeable our weather can be.

Whether the storms hit us or miss us is due to the path of the high level jet stream. But there is an added level of complexity, because the storms themselves influence where the temperature gradient is strongest and the position of the jet stream (meteorologists call this “internal dynamics”). So it’s very hard to predict exactly where the storms will be beyond the next five to ten days.

Interestingly, winter storms in the UK tend to arrive in ten or 20-year cycles. For example, during the 1980s and 1990s there were more frequent periods when storms tracked across the UK, bringing mild and wet weather. But during the 1950s and 1960s the opposite was true, with more years when storms missed the UK to the north or south, bringing colder, icier winters. A “stormy phase” doesn’t mean that every winter will be stormy, it just increases the chances.

Superimposed on natural weather variations is climate change. It’s clear that over the past century the UK has warmed, as have many other regions. Between 1961-2006, winter temperatures rose on average by more than 1°C. A warmer atmosphere holds more moisture, providing fuel for heavier rainfall. There’s already evidence of heavier rainfall over the UK and Europe, increasing the risks of flooding. Sea levels are also rising as the oceans warm, and this will also add to coastal flood risk.

Storminess itself is harder to predict and forecasts of future changes vary considerably between models. University of Reading scientists have looked at results from the latest suite of climate models and found indications of a slight increase in the number of UK storms, but climate model projections are quite uncertain in this regard. While we don’t know exactly if storms will become more frequent in coming decades, we do know that their impact is likely to become more severe when combined with the effects of a warming world and higher sea levels.

Written with input from and thanks to Dr Andrew Barrett, Professor Richard Allan, and Kathy Maskell of the University of Reading’s Department of Meteorology and Walker Institute for Climate System Research.