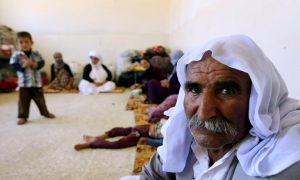 Explainer: Who Are the Yazidis?
0
Share Now
TelegramFacebookTweetEmailTellMeWeReddit
Copy Link 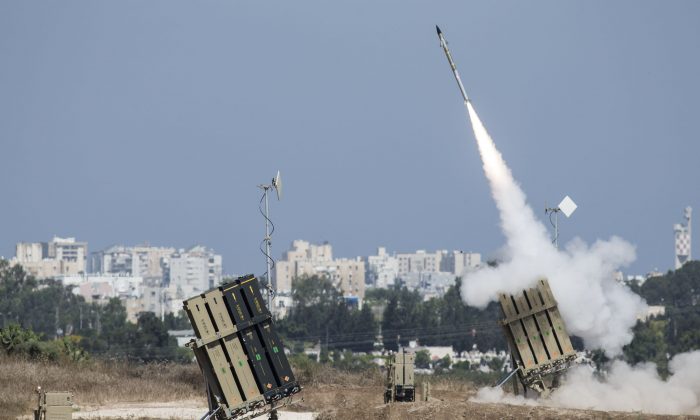 The Iron Dome air-defense system fires to intercept a rocket over the city of Ashdod, Israel, on July 8, 2014. (Ilia Yefimovich/Getty Images)
Middle East

The breakdown of an initial ceasefire between Israeli forces and Hamas last weekend played out to a familiar soundtrack: the wail of air-raid sirens and the menacing hiss of incoming rocket fire, followed in many cases by the concussive crackle of Iron Dome missiles intercepting their targets.

The Iron Dome anti-missile system first attracted attention two years ago, when it achieved between an 80-90 percent success rate.

But the sudden escalation of rocket attacks from Gaza in recent weeks, coupled with the success of Iron Dome in averting death and destruction by neutralising rockets headed for populated areas, has renewed interest in the system’s workings and wider strategic implications.

A ‘System of Systems’

So how does Iron Dome operate? In the arcane lexicon of military technology, Iron Dome is a “system of systems” and comprises three principal components:

Each component is responsible for a distinct phase of what military wonks call the “detect-to-engage” cycle. When a rocket is fired, it is detected in-flight by an advanced radar specially designed to track small, fast-moving objects.

That data is then passed via wireless connection to the control centre. Here, teams of Israeli military personnel assess the trajectory of the incoming rocket and determine whether or not it should be intercepted. Given the high cost of Iron Dome’s missiles, only those headed for populated areas are selected for interception.

When it’s necessary to intercept a rocket, a launch order is transmitted to the Iron Dome missile batteries, and a Tamir interceptor missile, using a sophisticated guidance system and information from the control-centre, is directed into the rocket’s path. The whole process takes between two to three minutes.

Iron Dome was developed in just four years and has been in service since 2011. Surprisingly, the impetus for the project came not from Hamas.

Despite its prolific use of rockets in the years following Israel’s 2005 disengagement from Gaza, Hamas rockets mostly fell harmlessly on sparsely populated Negev. So long as casualties remained low, and damage to property limited, the rockets were considered more a political nuisance than a national emergency.

The Birth of Iron Dome

This perception was shattered in July 2006, with the outbreak of war against Hezbollah in southern Lebanon. What began as a terrorist attack on Israel’s northern border quickly escalated into an all-out exchange.

Over the course of a month, Hezbollah fired around 4,000 rockets into northern Israel, necessitating an expansive campaign of air-strikes, a blockade and a costly ground invasion. By the time Israeli forces eventually brought the rocket-attacks under control, the damage was done.

The daily barrages exacted a human and economic toll and dealt a serious blow to Israeli morale. Out of the recriminations which followed, Iron Dome was born.

The Problem With Rockets

For Hamas and Hezbollah, rockets have long been attractive. They are cheap, highly mobile and their use requires no great technical expertise.

Rockets can be launched at Israeli cities from inconspicuous locations well within friendly territory, without the need for air-superiority. Rockets are also readily available from Iran, a country determined to undermine Israeli security. Most importantly, rockets are effective at instilling terror amongst the populations against which they are directed.

There are two main reasons Iron Dome offers Israel incomplete protection. First, each Tamir missile costs Israel between US$50-90,000, compared with only a few hundred dollars apiece for the rockets they intercept. Given such a profound cost imbalance, a sustained rocket campaign could have a crippling effect on Israel’s defence budget.

Second, rocket attacks are effective regardless of whether they hit their targets. The disruption they cause is what matters most. Civilians still take cover as rockets approach. Sirens sound, which is frightening and humiliating. The mere possibility that rockets could cause death and destruction is enough to sow terror on the ground.

Despite its apparent success, Iron Dome does not represent a significant technological breakthrough in missile defence. The reasons are fairly straight-forward.

The kind of rockets Iron Dome can intercept only fly short distances. Lacking any meaningful guidance system, they fly slowly along a low, predictable arc and are relatively easy to track and destroy.

Long-range ballistic missiles, by contrast, leave the atmosphere and re-enter at supersonic speeds. While they also follow a parabolic arc, they can be assisted by decoys, multiple manoeuvrable warheads, and electronic counter-measures – and the difficulty of interception can be increased by the launch of additional missiles.

For these reasons, and despite an impressive 90 percent success rate, Iron Dome remains a stop-gap measure tailored to the specific circumstances in Israel and of questionable value elsewhere.

Raoul Heinrichs is a writer, consultant, and scholar at the Strategic and Defence Studies Centre, ANU, where he teaches international politics, strategy and intelligence. This article was originally published on The Conversation. Read the original article.