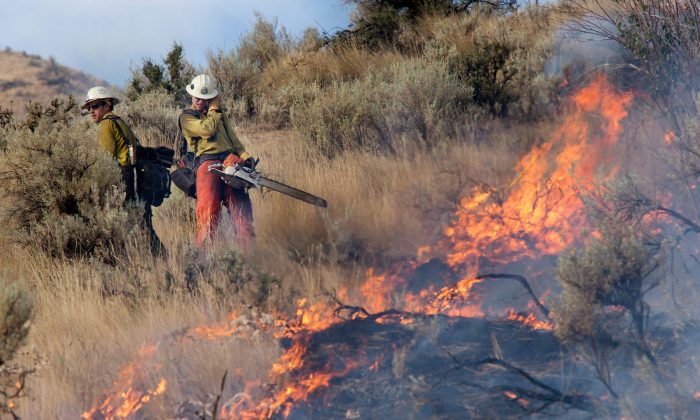 The recent surge of bushfire disasters has introduced fire-fighting tactics to everyday language.

Two important approaches that use fire to fight fire are “back burning” and “fuel-reduction burning”. Unfortunately these two fundamentally different approaches are often confused.

The idea is to reduce the intensity of subsequent fires at the same place by removing fine surface fuels such as leaf litter. Reducing these hazards increases the window of opportunity for fire fighters to control bushfires.

The technique can only be applied to open flammable vegetation. In dense eucalypt forests (such as wet sclerophyll forests) fuel-reduction burning is impractical because of the risk of uncontrollable fires sustained by heavy fuel loads that only become flammable in dry conditions. This limits the utility of this approach in heavily forested, wet regions.

Even in more open, dry sclerophyll forests, extreme fire weather makes reduction techniques much less effective than in milder conditions. For example, with extreme heat and winds, eucalypt crowns can catch on fire regardless of the amount of leaf litter and surface fuel.

Fuel reduction has to be applied frequently. Fuel loads build up quickly, often returning to a carrying capacity (when litter fall is balanced by decomposition) between 10 and 20 years.

This underpins fuel-reduction targets. In Victoria, for instance, the 5% fuel-reduction target means a given area of bush will be burnt every 20 years. But ecologists are concerned that such high frequencies can have damaging effects on plant and animal species that require longer fire-free intervals to complete their life cycles.

There is also much debate about the effectiveness of fuel-reduction burning, given that a huge area of landscape needs to be treated in order to increase the chance of significantly influencing wildfire behaviour.

There is growing evidence that the best benefits of fuel-reduction burning are close to the bushland suburbs (also known as the wildland-urban interface).

It must be acknowledged that such targeted burning is expensive to carry out safely given the need for engagement with numerous stakeholders (private land owners, councils, various branches of government). It is also dangerous work, which carries a risk of destroying houses and infrastructure if the fires escape control.

Finally, a serious side effect is smoke pollution, which can briefly fumigate nearby communities. Because of these constraints, attention is increasingly being focused on managing fuel without burning. This can involve using herbivores and thinning vegetation, including burning the debris in specially designed portable furnaces that have low smoke emissions.

A large fuel-reduction burn in Hobart in May 2013. (Mike Rowe/Flickr, CC BY-NC)

Back burning is a last-resort measure to stop wildfire from burning out specific areas. It works by setting fires from containment lines, such as established fire breaks or hastily contrasted ones made with a bulldozer or cut by hand.

Back burns are often set at night or during weather conditions when the fire danger is low. A spectacular use of back burning, which stemmed the threat of two large uncontrolled bushfires, occurred at the height of the Blue Mountains bushfire disaster in Spring 2013. But back burning is dangerous and carries substantial risks of exacerbating a bushfire event.

The ecological impacts of back burning are rarely discussed but may be quite substantial. Wildlife, which can normally flee a fire front, can become trapped between the bushfire and the back burn. Exacerbating impacts on wildlife is the technique known as “blacking out”, involving setting fire to unburnt areas that escaped combustion by the back burn. Such unburnt patches can be critical refuges for wildlife and a sort of seed for recovery of adjacent burnt areas.

Another harmful effect of back burning is the unintentional destruction of fire-sensitive biological communities. These include fire-sensitive plants, habitat for endangered wildlife and areas recovering from a previous high-severity fire.

Regrettably, in some situations ecologically vulnerable areas have been sacrificed to protect lives and property. This can be avoided by having ecologists help design the footprint of a back burn, but extreme bushfire situations may not allow sufficient time for fine-tuning.

One unappreciated aspect of back burning is that it makes it impossible to study how a bushfire would naturally spread across the landscape, given the coupling of human-set fires with the wildfire. For this reason, the fires set by lightning and left to burn in the south-west Tasmania wilderness are of considerable interest.

We can’t totally suppress fire in a flammable landscape — nor should we. Long unburnt areas can accumulate very heavy fuel loads, resulting in ecologically destructive fires.

But it is also important to acknowledge that wildfires achieve fuel reduction too. This occurs particularly on the flanks or sides of a fire, which burn at a lower intensity than the front of the fire, and during cooler periods between fire “runs” that are driven by extreme fire conditions. For this reason bushfires are sometimes left to burn if they present no threat to any valued economic or ecological assets.

We are yet to achieve ecologically sustainable fire management of flammable landscapes. Managing bushfires will become more complicated given the increased extreme fire weather driven by climate change and the need to reduce smoke pollution to minimise greenhouse gas emissions and protect human health.

Fuel-reduction burning will remain a key tool that must be cleverly incorporated in landscape fire planning. This will need to involve targeted fuel treatments around areas vulnerable to bushfires, as well as the development of buffer zones that can be used to contain wildfires using techniques like back burning and direct attack using water and fire retardants.

David Bowman is a professor of environmental change biology at the University of Tasmania. He receives funding from ARC, NASA, TERN and NERP. This article was originally published on The Conversation. Read the original article.