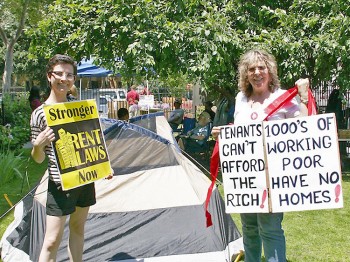 By Zachary Stieber
Print
NEW YORK—Housing advocates continued an ongoing series of demonstrations in support of the Omnibus Rent Bill, camping in tents outside the Holy Apostle Church at 28th Street and 9th Avenue on Tuesday night. They were there to demonstrate that the impact would be widespread and devastating if the legislation is not renewed and strengthened.

“There's a moral or conscientious obligation here to do what’s right, to do what’s correct. To me that's making sure that our most vulnerable, those that need the most assistance, are the ones that we're taking care of first, right?” said local resident Jesse Compoamor.

The legislation comes up for a vote in the state Assembly on June 15, when the old regulations are scheduled to expire, and includes renewing rent regulation, and repealing vacancy decontrol, otherwise known as vacancy destabilization.

Gov. Cuomo has yet to address the issue. His office expects he will speak about it sometime closer to June 15. There are approximately 2.5 million New Yorkers who live in rent stabilized apartments, according to Real Rent Reform (R3), an organization that supports renewing and strengthening rent legislation and organizers of the demonstration.

The purpose of the staged tent city on the last day of May was “to show both the governor and the state legislature where people will have to live if rent regulation does not pass, and vacancy decontrol laws are not repealed,” said Karen Smith, a retired State Supreme Court justice who advocates with R3, and has been living in the area since 1962. Events on May 31 included testimonials from Chelsea rent-stabilized tenants on how the legislation will affect them if it does not pass, dinner, and a candlelight vigil with local officials.

“I think what makes the city attractive is its diversity: that's what people come to New York to see, it's a melting pot. If rent changes, if rent becomes unaffordable for working-class people, your going to see a change in what the people look like in this city, a dramatic change. I guarantee it’s going to be a lot more homogenous. What makes this city so great is its people,” added Compoamor, who pays $700 a month to live in a rent-stabilized apartment. He expects that if the legislation doesn't pass, he will have to move out of the city “his grandparents helped build.”

Maxine Zeifman, a retired health care provider, worried about underlying motives governing the issue: “We need this affordable housing. The real estate in New York State is like oil is to Texas. It has enormous, enormous profits. … The city could end up being a gated city with no artists, no scientists, no health care providers.”

Permanent national Tent City demonstrations against rising homelessness, housing prices, and unemployment have occurred frequently over the past several years, including one outside of the Mellon Bank in Pittsburgh, and another in Sacramento, Calif. These tent cities often exist for just a short period of time before authorities force them to disperse. The R3 tent city will dismantle at 9:30 a.m. on June 1.