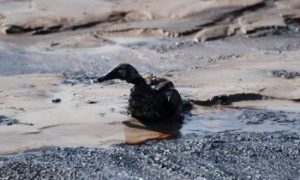 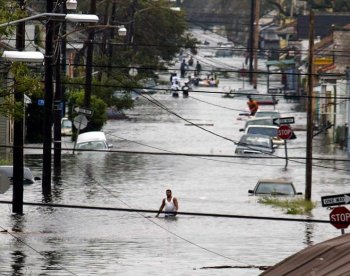 Residents wade through a flooded street in New Orleans, 29 August 2005, after hurricane Katrina made landfall. As Hurricane season approaches in the Atlantic, worries about the dangers of a hurricane forming over the catastrophic oil spill are growing. (James Nielsen/Getty Images)
US

By Shahrzad Noorbaloochi
Print
Hurricane season is approaching in the Atlantic and with its approach, worries about the dangers of a hurricane forming over the catastrophic oil spill in the Gulf of Mexico grow.

However, as for what the hurricanes would do to the oil spill, NOAA predicts that it will largely depend on the path of the hurricane. If a hurricane occurs over the region, the winds are likely to disperse the oil to a larger area. Storm surges may also carry the oil inland and to the coasts while the debris from the hurricane may also carry contamination from the oil.

A hurricane could have a positive effect on the oil spill as “wind can mix and weather the oil which can help accelerate the biodegradation process."

Experts from Florida State University (FSU) doing research on the various aspects of hurricane behavior and their possible interactions with oil leaks also expressed their views in an email correspondence.

Mark Bourassa, associate professor of meteorology at FSU wrote that if a hurricane were to occur in directly over the Gulf of Mexico during this hurricane season, the repercussions would be both positive and negative.

“Non-hurricane winds during hurricane season will push the oil spill away from Florida and towards Louisiana. If a tropical storm or hurricane forms or moves into the Gulf of Mexico, the winds are likely to change direction. If the tropical cyclone travels across the Gulf of Mexico, it is likely that the wind directions will change, and the strong winds will spread the oil. The storm surge would be likely to move more of it on land and into coastal wetlands and beaches. If the hurricane lingers over a subsurface plume of oil (one that isn't too deep), then it could move that oil up to the surface.

There are also some good things that will happen. The wind and waves from a tropical cyclone will help break up the surface layer of oil, turning it into an emulsion (kind of like shaking a bottle of salad dressing). That makes a lot more oil surface on the droplets, and gives naturally occurring microbes better exposure to the oil, making it easier for them to consume the oil. Tropical cyclones are typically associated with heavy rainfall. This rain can help flush wetlands and beaches, removing most of the oil back to the sea,” said Bourassa.

Dmitry Dukhovskoy, a scientist, specializing in Physical Oceanography at the Center for Ocean-Atmospheric Prediction Studies at FSU also pitched in. He pointed to the constraints facing a study of hurricane behavior, “unfortunately there is no one simple answer. Hurricanes are so stochastic (unpredictable) that any prediction is more or less guessing. It may happen that no major hurricane will hit the Gulf coast this season (I hope) but it may be completely different situation similar to 2005.”

Should a hurricane hit the Gulf of Mexico, Dukhovskoy said that “it may be really bad for the coast region. Depending on the hurricane trajectory, maximum winds, hurricane translation speed, and proximity of the oil spill to the cost, oil may quickly drift to the coastal wetlands, grass flats, small bays and river channels. According to our model results, under the hurricane force winds, surface currents may be as high as 1 m/s, meaning that the oil materials can travel towards the coast at speed of 3.6 km/hr. In one day, it will travel 54 miles. Due to the surge and a very flat topography of the Gulf coast, surge propagates far inland. If there is oil in this surge, the pollution will cover coastal land. Also, our previous surge model predicts that surge can propagate up the river as far as 10-15 km. This may suggest that oil pollution can affect areas located far from the coast.”

Tim LaRow, associate research scientist at the FSU Center for Ocean-Atmospheric Prediction Studies (COAPS), in collabration with his colleagues at COAPS have developed a new computer model that has predicted how many hurricanes will occur in a given season with unprecedented accuracy. LaRow will be making his predictions public on June 1 after utilizing the sea surface temperatures released by NOAA.