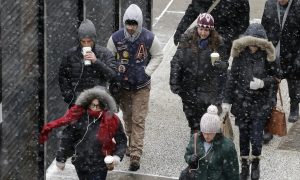 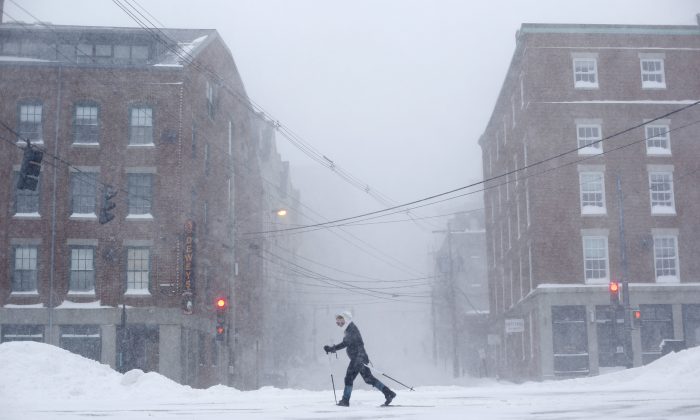 Lisetta Shah cross-country skis on Commercial Street in Portland, Maine, Tuesday, Jan 27, 2015, during a winter storm in downtown Portland, Maine. "I'll probably never get another chance to ski in the city," she said, explaining why she was outing the blizzard. Forecasters with the National Weather Service in Gray have said that much of southern Maine will see 12 to 18 inches of snow, while small bands of intense snowfall will increase those totals in localized areas. (AP Photo/Robert F. Bukaty)
Blizzard 2015

Meteorologists defend the weather forecast for Winter Storm Juno that hit the East Coast on Jan. 26 despite the fact that some areas, notably New York City, saw much less snow than predicted.

The storm, dubbed #Blizzardof2015 and#snowmageddon on social media, was expected to blanket the land from Philadelphia to New England with between two and three feet of snow. Yet that didn’t come true for a large part of the area.

Still, this was as good a forecast as it gets, according to the experts Epoch Times talked to.

“The forecast in general has been extremely good for this storm,” said Dr. Keith Seitter, executive director of the American Meteorological Society.

The Science of Storms

Predicting storms involves a dash of alchemy. There’s actually not one, but multiple computer models meteorologists blend together to come up with the best forecast, said Jeff Freedman, research associate at the Atmospheric Sciences Research Center of the State University of New York in Albany.

Some models predict well how a particular storm will behave. Other models may be better at predicting how much rain the storm will deliver. Meteorologists constantly upgrade the models, develop new ones, and look at how each has been performing over the past weeks. Then they settle on the right mix.

“There’s a little bit of art in there I suppose,” Freedman said.

But snowstorms are tricky. Especially when it comes to predicting how much snow will they bring and where the snow is going to land.

“The inches of snow is about the hardest thing there is to forecast,” Seitter said.

Part of the problem is that a small amount of water can make a lot of snow. With the right temperatures, one inch of rain can fall as a foot of snow, according to the experts.

There are also snow bands developing within the storm that can bring a lot more snow to a specific area, but those are very hard to predict until the storm actually develops, Freedman explained.

It’s even tougher for the coastal storms, as meteorologists have less data available for the part of the storm over the ocean.

The inches of snow is about the hardest thing there is to forecast.
— Dr. Keith Seitter, American Meteorological Society

And in the end, meteorologists have to translate the nuanced data into a message understandable for the public. Seitter acknowledged some details get lost in the media.

“Meteorologists are often providing a lot of that nuance, but what comes through is a number,” he said.

And because large storms have large impacts, response has to be tailored to the worst-case scenario. If meteorologists see models predict anything between one and three feet of snow, response agencies can’t settle for an optimistic scenario. “That would be an irresponsible thing to do,” Seitter said.

For Winter Storm Juno, the models varied on whether the storm would travel more to the east, or more to the west, as well as how much snow it would bring, Freedman said.

In the end the meteorologists missed the direction of the storm by dozens of miles, but for a phenomenon of this magnitude, Seitter was satisfied with the forecast.

“I’m sitting north-west of Boston with a little over two feet,” he made his point on Tuesday morning. “And it’s still snowing like mad.”

At least one meteorologist apologized for getting it wrong. An earlier article by Epoch Times has that story.