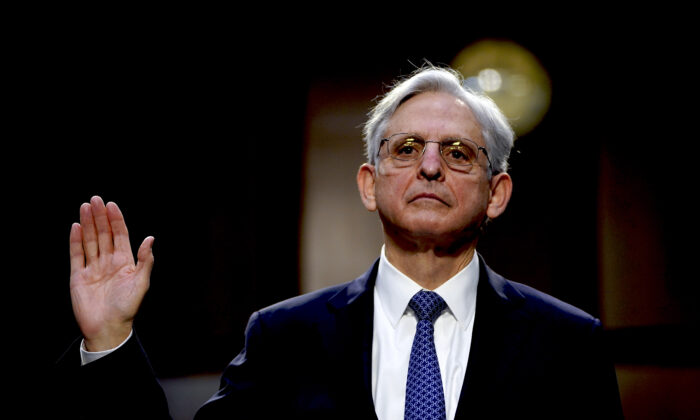 US at Risk of Descent Into ‘Anarchy’ Amid Heightened Distrust of DOJ, Law Enforcement, Expert Warns

The United States is at risk of descending into “anarchy” amid escalating criticism of federal law enforcement entities in the wake of the FBI’s raid last month at former President Donald Trump’s Mar-a-Lago estate in Florida, a legal expert has warned.

The Department of Justice (DOJ), in response to claims of bias, on Aug. 30 banned all of its non-career political appointees from partisan events and other political activity.

“We must do all we can to maintain public trust and ensure that politics—both in fact and appearance—does not compromise or affect the integrity of our work,” Attorney General Merrick Garland said in a memo to DOJ employees.

Attorney Sandra Spurgeon, who has successfully litigated hundreds of state and federal cases, told The Epoch Times, “We are spiraling to anarchy, and we have to take the politics out of the positions by people of power within our legislative and executive branch.”

Spurgeon, who supports the DOJ ban, said that Garland had no choice but to do something to try to restore the public’s respect for law enforcement. She warned that the leadership of the DOJ and the FBI “live a very different life than you and I do.”

“They don’t think about the same things on the level that we would think of things because they have been elevated into a state where they have lost the appreciation of impartiality,” Spurgeon said about top government officials that are the focus of the ban.

“And quite frankly, they just don’t care.”

Public distrust of federal law enforcement agencies has trended to low levels, with 53 percent of voters agreeing with a statement that the FBI is “Joe Biden’s Gestapo,” according to an Aug. 15–16 survey by pollster Rasmussen. The survey of 1,000 U.S. likely voters also showed that 44 percent of respondents view the FBI less favorably since the Mar-a-Lago raid over documents the government alleges Trump doesn’t have permission to hold.

Overall, only 36 percent of likely voters disagree with the description of the FBI as a “Gestapo” that benefits President Joe Biden.

The DOJ directive also came a few days before a primetime TV speech in which Biden directed fiery political rhetoric against Trump-supporting Republicans. In the Sept. 1 speech given in the shadow of Philadelphia’s Liberty Hall, Biden warned against “MAGA Republicans” who “live not in the light of truth but in the shadow of lies.”

Out-of-touch behavior by the so-called political class has led to the crisis that necessitated the DOJ ban, one former U.S. special agent told The Epoch Times.

One issue is that “a Biden appointee, the U.S. attorney for the state of Massachusetts [Rachael Rollins], showed up at a Joe Biden fundraising event where First Lady Jill Biden was appearing,” Eric Caron, who previously worked as an agent for the U.S. Treasury and for the Department of Homeland Security, said about the impetus for the attorney general’s directive.

“She even used a government vehicle” to get to the event, Caron added, all of which could be a violation of the Hatch Act ban on electioneering.

The electioneering claim is under investigation by the U.S. Office of Special Counsel, after the case was referred to the DOJ by Sen. Tom Cotton (R-Ark.) after Rollins, who was confirmed after a fractious process, showed up at the Biden fundraiser.

Others have wondered if the ban, as well as another DOJ memo issued on the same day reiterating a policy restricting communications with Congress, could be an attempt to intimidate so-called whistleblowers within the FBI and DOJ.

“Ever since we told you that FBI whistleblowers had begun contacting Members of Congress to report on political pressure from high-ranking FBI officials to falsely label some investigations and run interference on others to serve a political agenda,” noted former Trump attorney Jay Sekulow, the chief counsel at the American Center for Law and Justice. “Garland has been very busy trying to shut them down, and anyone else who might expose what’s going on.”

But even after discounting the possible partisan motives behind the moves, the gesture will be inadequate in regaining the trust and confidence of the American people, one critic says.

Under Garland, there have been a number of highly publicized cases that seem to indicate extreme politicization in the DOJ, Mike Davis of the Article III Project, which promotes constitutionalist judges and the rule of law, told The Epoch Times.

One such episode, according to Davis, involves an October 2021 memo by Garland foreshadowing “a series of measures designed to address the rise in criminal conduct directed toward school personnel.”

That memo came after the National School Boards Association, a key ally of the Democrats, wrote a letter to Biden, complaining that parents who showed up at school board meetings put school personnel “under an immediate threat” of violence. The association later apologized for the letter; Garland, later testifying at a House Judiciary Committee hearing, said that the DOJ hadn’t been told by the White House to issue the memo.

“Attorney General Garland’s ban on campaign activity for Justice Department political appointees is like placing a Band-Aid on a severed limb,” said Davis.

“I will say that it could possibly be a last resort,” he told The Epoch Times in an email.

Spurgeon cautioned that the level of disrespect for our legal system and the damage that is being done daily to our court system, which is “vital to us as citizens to prevent a state of anarchy” is accelerating.

“I don’t believe we are in a state of anarchy yet, but the question must be, how do we ensure a level of transparency with our government, where ‘we the citizens’ have restored trust in those chosen to govern us in a bipartisan manner?” she said.

“I think American citizens will no longer accept being governed blindly and without accountability.”

Officials at DOJ didn’t respond by press time to a request by The Epoch Times for comment.