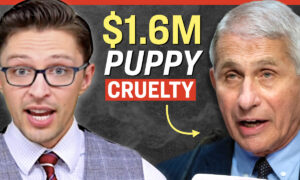 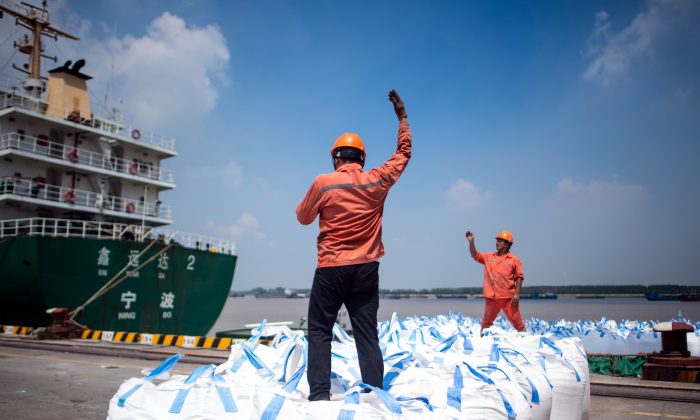 Workers unload bags of chemicals at a port in Zhangjiagang in eastern China's Jiangsu Province on Aug. 7, 2018. (JOHANNES EISELE/AFP/Getty Images)
US News

US Should Use Human Rights to Win China Trade War, Expert Says

With the Chinese Communist Party’s most important mouthpiece, People’s Daily, claiming that China won’t back down when faced with “external challenges,” the United States needs to find a new means to win the trade war, and may want to focus on human rights, a China expert says.

The People’s Daily published an editorial of more than 5,000 words on Sept. 11, stressing that China wouldn’t balk, even when being “suppressed” by “established countries.”

On the same day, Fu Ying, vice chairperson of the Foreign Affairs Committee of China’s National People’s Congress, and a member of the Academic Committee of China’s Institute of International Strategy at the Chinese Academy of Social Sciences, published an opinion piece on Bloomberg titled “How Should China Respond to a Changing U.S.?—Stand firm. Stay cool. And keep talking.”

Some China observers and analysts see the two articles as an “official,” yet indirect response to President Donald Trump’s latest threat of imposing tariffs on an additional $267 billion Chinese imports.

The People’s Daily editorial claims that being suppressed by established countries is an unavoidable obstacle for emerging countries, arguing that all previous emerging superpowers in the world have encountered the same challenge. It claims, however, that China is fully confident that it will overcome this obstacle, as it has the “tremendous social system strength” brought about by socialism with Chinese characteristics.

Fu Ying’s article basically makes the same argument, although its style is more in tune with Western tastes.

Economic analyst Qin Peng said that the People’s Daily editorial and Fu Ying’s opinion article should be viewed as a coordinated act, as high-ranking CCP officials have reached some consensus regarding how China would conduct its part in the trade war. The People’s Daily editorial is full of hatred towards the United States, and expresses the CCP’s strategy of not backing down.

Qin said these two articles reveal the CCP’s real intentions, and that the outside world shouldn’t be deceived or affected by any “softer” words or attitudes. While the CCP could make some necessary concessions, under its current system, it won’t make any real changes to its economic structure, or to meet the requirements of the World Trade Organization.

The CCP could adopt a tactic of delaying, or having different people offering different messages to confuse the world. That would serve to take advantage of, get involved in, or create internal conflicts within the United States to achieve its goals.

The United States should take new initiatives to gain greater impacts with smaller costs, Qin said. For example, the United States can impose financial sanctions against individuals and businesses in China that violate human rights.

Sanctions could be leveled against Chen Quanguo, the Communist Party secretary of the Xinjiang Uyghur Autonomous Region, who has sent more than 1 million Uighurs and other Muslims to re-education camps, as well as Hikvision Digital Technology Co, which is involved in that crackdown. If the United States can seize or freeze their assets in the United States, other CCP officials will definitely get the message and become less willing to do evil, Qin said.

According to Frank Tian Xie, a professor in business at the University of South Carolina Aiken, the U.S. and China delegations have had a very fierce debate during negotiations about trade. Xie said the CCP officials bored the U.S. delegates to death with their hours of meaningless, empty yet big, typical CCP-style statements.

During the talks, CCP officials and scholars are said to have accused the United States of bullying, but always avoided the real questions from the U.S. side. As a result, the dialogue was a total failure.

Xie believes that there won’t be any solution to this trade war, unless there are complete changes in China’s political structure.