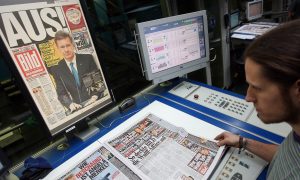 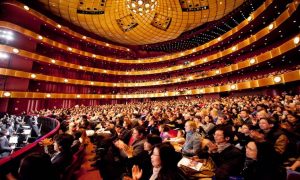 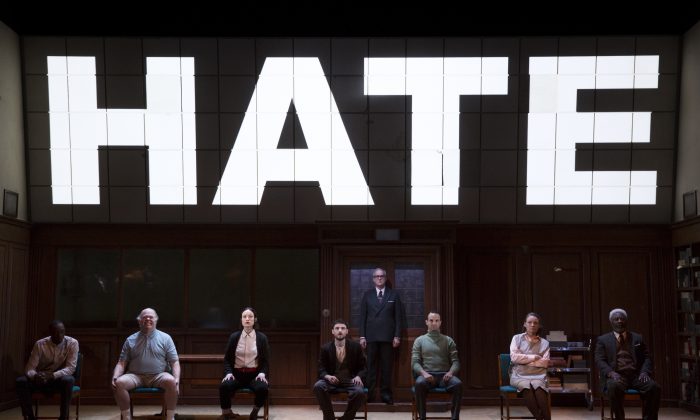 The cast of the stage adaptation of “1984,” now at the Hudson Theatre. The citizens of this dystopian world are subjected to doublespeak, in which black equals white and hate equals love. (Julieta Cervante)
US News

While most Americans favor freedom of speech, there is some support among likely voters for banning speech that’s deemed to be offensive, according to a recent survey conducted by The Heartland Institute and Rasmussen Reports.

When asked whether speech that a majority of Americans think is offensive, including speech considered to be racist or sexist, should be banned, 50 percent of respondents answered no, while 27 percent said yes. Another 24 percent weren’t sure. In the 18– to 39-year-old age group, 37 percent said that such speech should be banned. Among government employees, the number was even higher, with 42 percent answering yes.

Of those who answered that speech should be banned, 48 percent favored jail time for people who violate such bans, while 35 percent said no, and 17 percent weren’t sure.

The survey also showed that 38 percent of Americans think that those who say or write something believed by most to be offensive shouldn’t be allowed to hold public office. Forty-four percent disagreed, and 18 percent weren’t sure.

“I think it’s extremely disturbing that such a high percentage of Americans would support banning free speech,” Justin Haskins, the editorial director of The Heartland Institute, told The Epoch Times.

The survey showed that people who support Democratic presidential candidates were more likely to support bans on speech. Fifty-one percent of Americans who said they have a very favorable view of Sen. Bernie Sanders (I-Vt.) supported banning “offensive” speech, and 36 percent of those who said they have a somewhat favorable view of Sanders say the same.

As a whole, 37 percent of voters who identify as Democrats believe “offensive” speech should be banned, according to the survey.

Pointing to these results, Haskins said if a Democrat is elected president in 2020, Americans should be concerned about infringements on their First Amendment rights.

“I think it absolutely is something Americans should be worried about, not only because if Sanders, or Warren, or another member of the socialist wing of the Democratic party ends up becoming president, they would have at their disposal a massive amount of power because of the bureaucratic structure that exists in Washington, D.C., and elsewhere, but also because they would be putting judges on the Supreme Court and federal courts across the country who could potentially reclassify free speech so that free speech doesn’t really mean what free speech means today—it means you’re free to speak so long as you’re not offending anyone.

“And if that’s how courts in the future redefine free speech, then you essentially lost a free society at that point. I think with what Bernie Sanders and Elizabeth Warren have said in the past, it certainly seems like a very real and troubling possibility.”