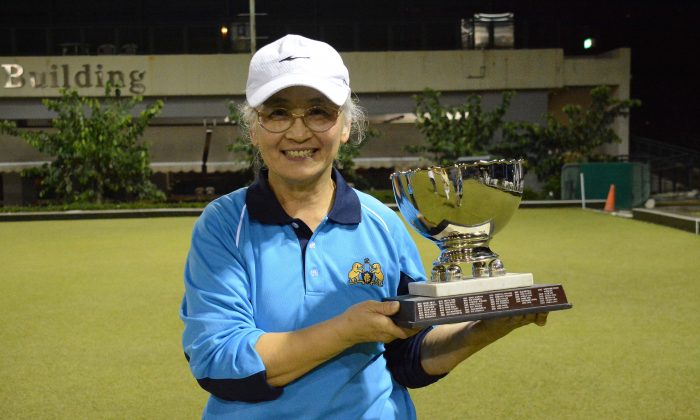 HONG KONG—Sixteen-year-old Gloria Ha fell at the last hurdle in her fight to becoming the youngest ever winner at the National Knock-out Singles, lost to Shirley Ko, a bowler 51 years senior than her, in the final last Sunday, Dec 10.

A total of 133 woman bowlers participated in the annual tournament, which was played in four venues around Hong Kong.

Ha, a member of the Hong Kong Youth Team, started bowling in 2010 and has represented Hong Kong in a number of international competitions.  Her latest achievement was at the Asian Under 25 Lawn Bowls Championship in India in October when she bought home two gold medals from the Singles and Mixed Pairs disciplines.  She was the second runners-up at the U25 Championship a week ago.

Ko started bowling in 1998 in Canada, won the Canadian women’s singles in 2005 and represented Canada in a number of competitions.  She withdrew from the Canada team in 2009 and relocated back to Hong Kong in 2016, she represents Indian Recreation Club in league and national competitions.

Ko entered the finals of the National Fours and Pairs earlier this year but returned empty-handed from both. This gave her extra motivation to do well in the Knockout Singles.

Ha overcame a number of players and defeated Singapore International Tammy Tham in a tight semi-finals match. She also took time to study for her examination during the day, between matches.

In the final, Ko managed the green and weight well as she drew one really close shot in every end, despite the fact that Ha also drew some close shots.  She took the first six ends to open a lead of seven shots.  The difference was extended to 4:13 after 13 ends.

Despite a late surge from Ha it was a bit too little and too late.  The game finished 8:14 when the time was up.

Ko was very happy about winning her first title in Hong Kong, “This is my second time participating in this competition and I am very happy to win it.  I think my peaceful mind helped me to win today because it allowed me to perform [to] my usual standard, especially on the weight control.”

Ha believed that she played quite well but admitted the green did cause her some problem, “The green is a bit tricky and my bowl cannot turn as desired. Probably that makes the difference.”

The National Knockout Singles has a tradition of playing all games within one day, representing a tough test on physical fitness, mental toughness and stamina of the competitors. The game on Sunday evening finished at 11:30 pm.

On Saturday Dec 16 the new Triples league commences with matches starting at 2.30pm at all greens in Hong Kong. On Sunday Dec17 the men’s Knock-out Singles will take place starting at 9am at CdeR, HKFC, IRC, KCC, TKO and VP.  Quarter finals onward will be played at KCC.

Claudius Lam is an officer of the Hong Kong Lawn Bowls Association..