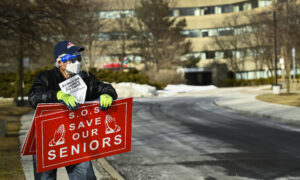 A Year Into the Pandemic, the Long-Term Care Crisis Is Far From Over
0
Share Now
TelegramFacebookTweetEmailTellMeWeReddit
Copy Link 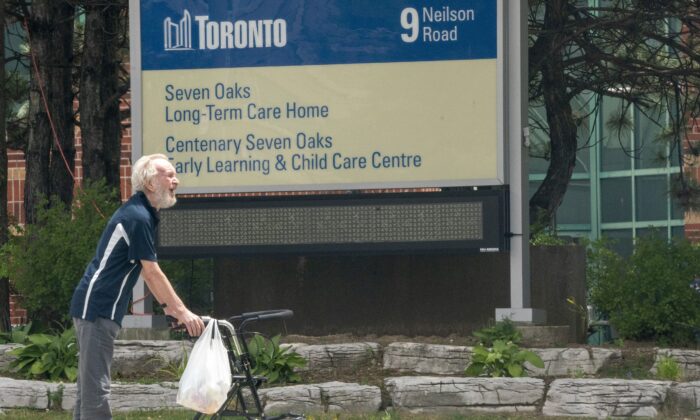 A resident takes a walk outside the Seven Oaks Long-Term Care Home in Toronto on June 25, 2020. (The Canadian Press/Frank Gunn)
Canada

A report by the Parliamentary Budget Officer suggests that an adequate expansion and upgrade of seniors long-term care in Canada would increase the public cost by $13.7 billion a year. It’s a high cost that has some renewing calls to emphasize care in the home over an institutionalized model.

The recent analysis by Yves Giroux was prompted by House of Commons Motion 77, introduced by Green Party MP Paul Manly, which proposed several changes to seniors care that would carry significant costs. The PBO report estimates an $8.5 billion price tag for the proposed changes to facilities-based care, which includes adding 52,000 new long-term care beds, raising staff pay and benefits by 15 percent, and increasing direct care from 2.7 hours per day to 4. An additional $5.2 billion for home care would bump up its share of total public spending on seniors care to 35 percent.

The $13.7 billion new annual spending would see the public cost of seniors care jump to $43.8 billion per year from $30.1 billion, based on 2019–20 spending by the provincial and territorial governments that included $20 billion on facilities-based care and $10.1 billion on home-based care. Giroux said a 4.1 percent annual spending increase will be necessary to keep up with Canada’s increasingly aging population.

Sinha chairs a federal commission on establishing long-term care standards and expects a first draft of his report to be released in January 2022. However, he prefers Denmark’s approach, which prioritizes home care over care homes, and even took Canadian deputy ministers to Denmark in 2017 to see for themselves.

“The Danes were just shocked when they heard about our care homes with all these people. They said, ‘Why would you keep these people hostage? Why don’t you send them back home? … It’s much more expensive for you to provide care in a hospital than in the person’s home. They have a home, they have a bed, you just have to send a nurse or a personal support worker there, so why wouldn’t you do that? Why would you waste so much money?’” he recalled.

Sinha believes some of the perverse incentives to prefer care homes are political.

“There’s this huge obsession about building long-term care beds and building new facilities because it’s a great ribbon-cutting opportunity for a politician, even though it’s a much more expensive [option],” he said. “Home care is largely invisible.”

It would seem that now, more than ever, a care home is the last place in which Canadians would ever want to live. An NIA/Telus survey conducted by Leger in 2020 showed that nearly 100 percent of Canadians aged 65 or older want to live independently at home as long as possible. A majority said the pandemic changed their opinion on whether they would put themselves or a loved one in a care home.

Sinha says care homes have chronic staffing problems, in part because nurses are paid less to work there than in a hospital. He estimates that 430,000 Canadians have unmet home care needs, more than 50,000 people are on a long-term care home wait list, and 15 percent of hospital beds are taken up by seniors waiting to get into homes.

“With declining fertility rates … we’re going to have one-third less family caregivers on hand. [They] are providing 90 percent of a person’s home care. Who’s going to provide that care?”

The survey found that currently in Canada, more than 3 million unpaid caregivers provide care to an aging parent.

‘Sacred Obligation to Your Elders’

Paul Adams, a former University of Hawaii sociologist, said that in the 19th century, families and religious institutions cared for the elderly. Poorhouses had some public funding, but they required people to work and often included agriculture as a way to feed their own residents, the elderly, and the disabled.

“Religiously motivated charitable alms houses … looked after old people where no one else could or would. And they tended to [house] single men who hadn’t provided for themselves either by having children … or savings,” Adams said in an interview.

“Old women—someone would take them in, because they were just seen as maybe more useful, or people were sorry for them. Like, a vicar might take in an old lady who would help out in the house and things like that.”

Adams said social security and seniors’ pensions are “partly a response to urbanization, mobility, the decline of the close-knit family, but also they substitute for … the basic historic idea, which is your children are your social security. They are your life insurance. And you see that in India or any other country that doesn’t have such a well-developed financial social security system.”

Although some policy initiatives and tax incentives can encourage marriage and family, a full restoration would require societal change, he said.

“It is part of the whole issue of rebuilding the strong sense of family, which was largely demolished in the sexual revolution in the 1960s, where basically the needs of children and elders were sacrificed to the desires of young adults and adults. And so it became actually much more individualistic,” Adams said.

“You not only need the children, but you need to inculcate a very strong sense of filial piety, a sense of sacred obligation to your elders, or it won’t work.”