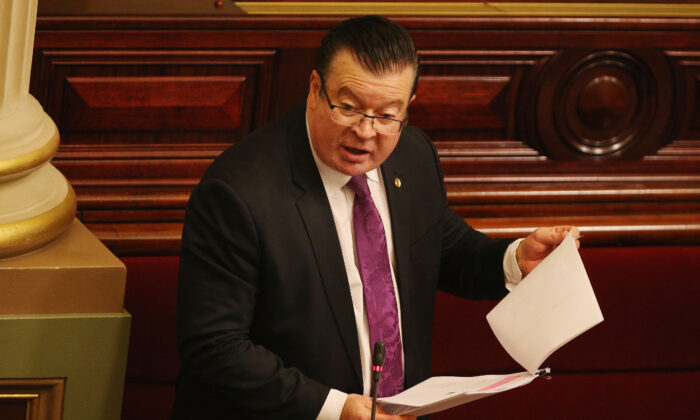 Victorian MP Bernie Finn has joined the Democratic Labour Party (DLP) and will lead the party at the state election this November.

His expulsion comes after the Victorian branch of the traditionally centre-right Liberal Party passed a motion on May 24 cancelling Finn’s membership, which he had held for 41 years.

The move was in response to a Facebook post by Finn where he said he was “praying” for the practice of abortion to be banned in Australia.

His post came in the wake of revelations that the U.S. Supreme Court was considering overturning the landmark Roe v Wade decision, which entrenched the right of women to have abortions in the United States.

Opposition leader Matthew Guy said Finn’s expulsion was not in response to his beliefs.

“I want to make it that this motion is about respectful discourse,” he told reporters. “It is … not about naval-gazing from the federal election or other issues. It is about moving on and being a sensible alternative to government.”

On June 2, Finn announced his move to a new political home, while calling the DLP a “genuinely conservative labour party.”

The DLP was deregistered nationally in March for not having enough members; however, it still exists in Victoria. The DLP is known for its 1955 split from the Australian Labor Party over concerns communist elements had infiltrated the centre-left party.

The formation of the DLP was a strategy to dilute the size and membership base of the Labor Party so it could not win government. The plan worked until 1972 when Gough Whitlam took the Labor Party to office.

“And on the other hand, you’ve got a Liberal opposition … like a cork in the ocean—they’re just all over the shop. You never know what’s going to happen next. It’s a day by day proposition.”

Finn said the DLP was a principled party, and it strongly believed in workers, small businesses, and traditional families.

“I think that will appeal to a lot of people,” he said.

The MP also claimed to have been approached to join eight other political parties, including the United Australia Party.

When learning of Finn’s joining the DLP, Guy said he would not make any comment on the issue.

“I don’t want to make any adverse comment. That’s up to Bernie to do that,” he said. “The Liberal Party in Victoria has a very clear plan to go forward positively, to grow our state, to get us back on our feet–and we are not going to be deterred by that.”