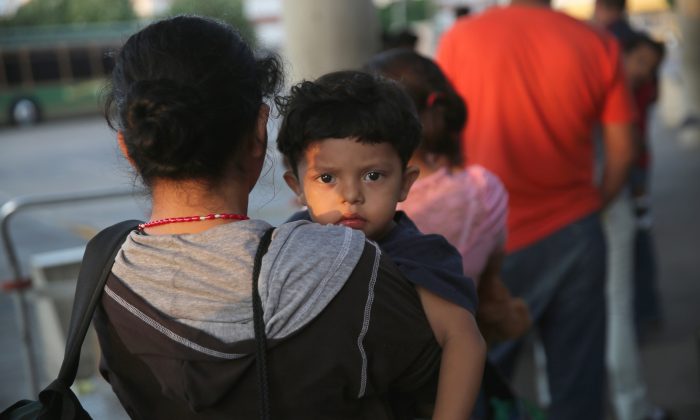 In this file photo, Salvadorian immigrants just released from U.S. Border Patrol detention wait at the Greyhound bus station for their journey to Houston on July 25, 2014 in McAllen, Texas. (Photo by John Moore/Getty Images)
New York

NEW YORK—As the country scrambles to deal with the recent influx of unaccompanied children from Central America crossing over the U.S. border into Texas illegally, the New York City immigration court will begin hearing a portion of nearly 3,500 children’s deportation cases on Wednesday.

The cases, which typically take years to proceed, were expedited to the front of the immigration court docket due to recent orders from the U.S. Department of Justice.

Most of the children are from Honduras, El Salvador, and Guatemala, and cross the border alone to escape escalating violence in their home countries.

At a press conference on Tuesday, immigration advocates and city officials expressed concern that with the expedited cases, the shortage of lawyers capable of dealing with juvenile immigration cases will be further exacerbated, leaving the children with no one to represent them in court.

New York City Public Advocate Letitia James called on the city’s attorneys to offer legal representation for these children pro-bono, noting that lawyers have a “moral obligation” to assist them.

“This is a humanitarian issue, not an immigration issue,” said James at the press conference.

Director of the immigration law unit at the Legal Aid Society, JoJo Annobil, said that legal organizations like his need increased funding to train and mentor more pro-bono lawyers to deal with the immigration cases. He noted that out of three major legal organizations in the city that provide legal services to unaccompanied minors, only six lawyers work on juvenile dockets full time. Most attorneys who represent these minors are currently working pro-bono.

A recent study by Syracuse University found that in almost half of the cases where an unaccompanied child was represented by a lawyer, the child was able to remain in the United States. Without representation, 9 out of 10 children were deported. Immigration courts do not provide lawyers for those who cannot afford one.

Immigration advocates also worry that with expedited proceedings, judges are pressured to make decisions quickly—leaving room for violations of proper due process.

“This is a deportation conveyor belt for children,” said director of legal services at The Door, Eve Stotland. The Door is a social services organization focused on youth.

To deter more children from crossing the border, the United States House of Representatives passed a bill on Aug. 1 that would speed up deportations for unaccompanied minors, but it is not expected to pass in the Senate. To date, the U.S. Customs and Border Protection has apprehended close to 63,000 unaccompanied children at the southwest border of Texas, according to the agency’s figures.

The state is expected to receive 10,000 unaccompanied children by the end of the year, according to estimates by the New York Immigration Coalition. The city established a task force last month to address the needs of the children who have arrived, including providing mental health care, education, and housing.