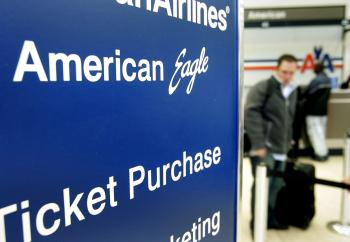 TICKETING OPTIONS: An American Airlines/American Eagle ticketing counter is seen at Chicago's O'Hare International Airport in a file photo. American has recently terminated its relationship with two of the largest online travel agents, Orbitz and Expedia in a spat over booking fees. (Scott Olsen/Getty Images)
Business

American Airlines’s spat with Expedia is the latest incident in an escalating battle between airlines and online travel agents.

Expedia parted ways with American after it decided not to cut the fees it charges American to book flights on its behalf. American had been looking for agents to cut fees as one way to lower fares.

Last month, American withdrew from listings on Orbitz Worldwide Inc., another popular online travel website, due to similar disagreements over fees. Subsequently, on Dec. 23, Expedia changed its search module to make American flights less prominent on its website, while customers can still book American flights on Expedia. But this past weekend Expedia pulled the plug entirely on all American flight listings.

It is not known what percentage of online bookings airlines generate from online travel agent websites such as Expedia, Orbitz, or rival Priceline, but a large number of consumers looking for travel deals visit the sites daily.

In recent years, to take advantage of an increase in Internet usage, airlines have welcomed online travel agents.

The recent global recession has altered the landscape of the travel industry. Battling losses, airlines have cut routes and decreased the number of planes to cater to lower demand, restricting the availability of lower fares. In conjunction, the industry has sought to renegotiate the fees it pays agents as a way to lower fares for consumers.

AMR Corp., the parent company of American Airlines, recently developed an online booking system called Direct Connect to allow large online travel agents to search and book flights on American. It requested online agents to connect to the American Airlines system rather than using a global system prevalent in the industry.

American’s action “will result in higher costs and reduced transparency for consumers, making it difficult to compare ticket prices and options with offerings by other airlines,” said an e-mail statement from Expedia.

“Customers looking to compare flights or fares online should visit other travel sites such as Kayak.com or Priceline.com for the most accurate and up-to-date information,” read a statement on American’s website, announcing its termination of relationship with Orbitz and Expedia. American also encourages customers to book directly on its website for the lowest prices.

“American also continues to provide its airfare content to thousands of travel agency partners, both through global distribution systems and through American's own direct connection technology,” it continued.

In an update American Airlines provided to the media on Dec. 29 following its commercial dispute with Expedia and Orbitz, saying that it has seen an uptick on bookings via AA.com, its corporate website, as well as referrals from other fare search engines.

“Our results to date show that consumer choice is alive and well and that our customers continue to have thousands of options to purchase American's competitive fares and convenient schedules," said Derek DeCross, American's vice president and general sales manager, in the update. "It is also clear to us that other online travel sites and traditional travel agencies are capitalizing on this market opportunity to gain business.”

According to its parent company securities filings, American gets roughly two-thirds of its revenues from third-party travel agents.

All parties involved say that they are open for a new business agreement in the future, should common ground be reached.

The Fort Worth, Texas-based American is the third largest U.S. airline by passenger traffic, behind United Continental and Delta Airlines.

But online travel booking is far from dead, despite efforts by airlines to slash middlemen and keep a larger portion of profits for themselves.

“While online flight search is rapidly evolving, we think there is room for more competition and greater innovation,” said Google Vice President Marissa Mayer in a blog posting related to the agreement with ITA.

The deal is currently under review by regulators for antitrust concerns, believing that Google, a leader in Web search, is attempting to dominate the travel booking industry.

“This deal has the potential to greatly impact the robust online air travel search and booking markets relied on today by millions of consumers, and it warrants a careful review by the Antitrust Division to determine whether it will substantially harm competition and consumers in the markets affected,” said a letter by Sen. Herb Kohl (D-Wis.) to the Department of Justice Antitrust Division.

“As an independent provider of air travel search functionality, ITA currently has the incentive to license its service broadly as it has done since its inception,” Kohl said. “However, the incentives could change if ITA is acquired by Google.”

But Google maintains that it is attempting to improve an industry that is fragmented and not the easiest to use from the consumers’ point of view.

“Though 49 percent of travelers purchase travel online, it is still time consuming and slow to search for travel options online,” said a statement from Google, defending the acquisition. “We plan to work with ITA to create a new, easier way for users to find better flight information online.”