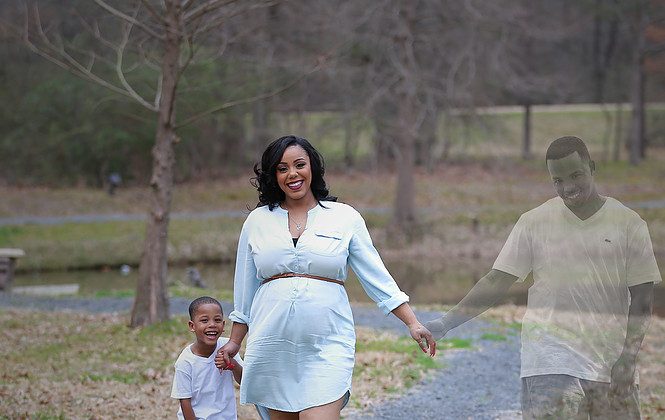 Things couldn’t get any worse for Nicole Bennett whose husband passed away two months before their second child was due.

Deonta, Bennett’s husband, wanted to do a maternity photoshoot with Nicole and their 4-year-old son Landen before her March 25 due date, but evidently, things took an unexpected turn. To honor Deonta and his wishes, Bennett decided to incorporate her late husband in the pictures, and the results were breathtaking.

It’s memories for my son of his father and for my daughter who will never meet her father.
— Nicole Bennett

“I wanted to do something special because he’s been there for my son since day one,” Bennett told ABC News.

She reached out to a local photographer, Sidney Conley, who is influenced by Michelangelo, Leonardo Da Vinci, and Vincent Van Gogh, and they shot in late February. Later on, Conley digitally added images of Deonta into the pictures—something Conley had never done before.

“It brings me to tears, looking at the photos myself,” Conley said. “Just how I edited [the photos] with him looking down on them, it’s showing that he’s making sure they’re OK.”

According to ABC News, Bennett’s husband unexpectedly died on Jan. 5.

“Our relationship was like any other—it had ups and downs, but the love we had for one another proved we could never give up on one another,” Bennett told TODAY Parents. “He was a kindhearted, free soul that loved everyone. It was important for me to do this tribute to him because it’s memories for our kids in years to come. He was always there for our son and his other two kids (from a previous relationship.)”

Although, the new mom-to-be (again) is surprised how viral her pictures went, she is “happy that my photos have inspired others who are grieving the loss of a loved one.”

Bennett said the point of these portraits were to show a side of Deonta that everyone who knew him knew, “a man that loved his family, his kids, and life in general.”