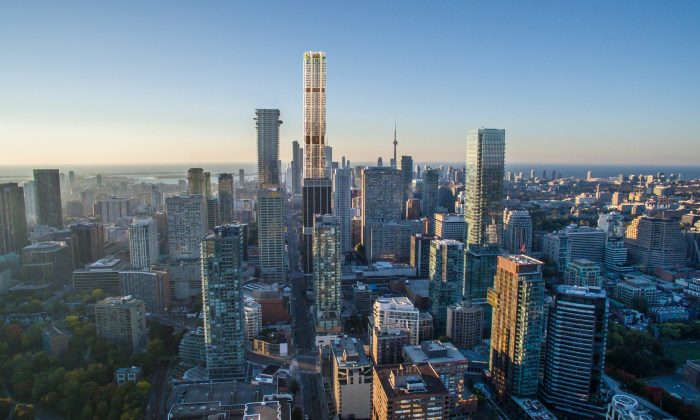 Rendering of The One condo building in Toronto. (Courtesy of Mizrahi Developments)
Global Real Estate

Have no fears about Toronto’s real estate market as we head into 2018 – it will continue to be a sound investment, especially for those looking to buy a condo.

Eric Kuzuian, president of PSR Brokerage Ltd., in an interview with the Epoch Times, says the market will stabilize yet remain healthy in the year ahead, particularly for condos in the downtown core or within close proximity, whether they are new or resale. PSR is a premier full-service Toronto brokerage with extensive experience in new condominium sales.

The year ahead will be steadier than the market of 2017, when prices shot up by 26 percent between December 2016 and April 2017. And while the Fair Housing Plan and Foreign Buyer’s Tax, introduced by the provincial government in the spring of 2017, abruptly cooled the red-hot low-rise market and sales and prices dropped, the downtown condo market was relatively unscathed. One reason is that condo prices didn’t rise to the same astronomical—and ultimately unsustainable—prices as low-rise homes. Another reason was that condos were the best option for anyone looking to live downtown, says Kuzuian, because they are attractively priced in comparison to semi or detached homes. Those factors are still applicable as we head into 2018.

“Millennials are focussed on is lifestyle, amenities and being close to work,” says Kuzuian. “They are willing to live in smaller spaces and condos are the more affordable option.”

The fall of 2017 was very active in terms of new condo launches and Kuzuian says fears about whether the number of new units coming to market could be absorbed were unfounded.

“Most projects in the core did very well,” he says. “One reason is that the rental market remains so attractive with historically low vacancy rates, if you’re an investor.”

People should be aware the 2018 market may experience less price growth than in recent years, Kuzuian says. It’s hard for people to get excited about single digit growth after the last two years were an anomaly, but he says Toronto area real estate will still offer a very good return on investment. Kuzuian says as long as sellers understand the value of their property and don’t base prices on the unrealistic highs of March 2017, they can expect to find buyers as low inventory of homes will continue.

New home prices, whether condo or low-rise, will increase as the industry is demanding record prices for land and construction costsand those costs will result in more expensive new home purchase prices. Developers are being more cautious and not launching projects until they receive zoning approval, unlike in the past. There will still be exciting new projects coming to market, says Kuzuian, such as 1181 Queen West by Skale Developments, a 120-unit boutique condo to launch in February.

Kuzuian says most areas close to the city, such as North York, will enjoy a robust market, as people who aren’t able to find what they are seeking in the core will look to surrounding neighbourhoods that make for easy commuting.

Immigrant buyers will continue to play a key role. It’s not only that Toronto and Ontario are the preferred destination for many of the 100,000-plus immigrants who arrive in Canada each year, but because of their desire to own property.

“The beauty of real estate is that it’s a universally understood language,” says Kuzuian. “It’s a tangible asset and most people moving here feel investing in real estate is their number one goal.”

He says that desire to buy property outweighs any rules or limitations government or banks may impose. Many immigrants understand that Toronto has a strong future.

Chinese buyers are particularly important to the GTA market, he says. “In the last couple of pre-construction projects we launched, Chinese buyers were the most active. There is a culturally-driven affinity for real estate and Canada remains an accessible market. There is also an appreciation for the quality of our education and health care systems.”

Kuzuian says Toronto’s real estate market is headed “to where it needs to be headed”—and that’s on an upward trajectory. It’s a growing metropolis, on the cusp of being considered a world-class city, and like other world-class cities, maybe the average person shouldn’t be able to afford real estate in the heart of the city.

“Right now, people still can afford real estate in Toronto, but that window is getting smaller and smaller,” he says.