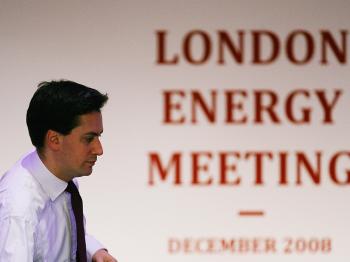 Expect Oil See-Saw to Continue in 2009

Schizophrenic? Perhaps, but the price of oil closely follows the law of supply and demand; and 2008 was a strange year in more ways than one. The beginning of last year saw a huge spike in oil prices as the commodities boom and a declining U.S. dollar propelled the price of crude oil to the stratosphere.

But the financial crisis eventually stole its thunder—after reaching a peak price of $145 on Jul. 3, oil prices plummeted to as low as $34 in December as demand worries swirl due to a slumping global economy. Even supply cuts by the OPEC cartel could not lift sagging prices—the latter portion of 2008 saw some of the cheapest gasoline in more than three years.

Wednesday’s rally in oil prices was mainly due to political instability in Eastern Europe. Russian state-controlled energy giant Gazprom said it would cut off its gas supply to Ukraine due to billing disputes, the company claimed.

It is still unclear what effects the supply disruption will cause to the European energy market or how long the suspension will last.

While gas prices are currently depressed, most analysts predict that it would rebound this year, and almost everyone foresees more volatility ahead. While it’s a stretch to imagine average gasoline price to top $4 as it did last summer, expect prices to exceed the low $2-range in 2009.

The current recession has dampened demand for gas so much that rock-bottom gas prices did nothing to persuade consumers in buying more gas. A report released on Dec. 31 by the California state Board of Equalization showed that third-quarter gasoline consumption in the state dropped 6.1 percent compared to the same period in 2007, the tenth quarterly decline in a row.

Some analysts suggest that gas consumption likely reached an all-time high a few years ago during the SUV-craze. American drivers have finally switched to smaller, more gas-friendly vehicles, and they are unlikely to switch back despite a temporary drop in gasoline price.

Another factor affecting demand was business and governmental capital spending. Many construction and other infrastructure projects were tabled due to lack of financing last year, which could quickly change when President-elect Barack Obama steps into office. Obama promised to increase federal government spending on infrastructure to boost the sagging U.S. economy. Even slight changes—or even expected changes—in supply and demand can quickly alter global oil prices.

High About a Tax Hike?

During the U.S. presidential election, both candidates promised to halt “America’s addiction to foreign oil.” However, one energy veteran suggests that the cure for high gas prices is, believe it or not, high gas prices.

In a recent interview with Fortune, Western Refining, Inc. CEO Paul Foster said that he believes higher tax on gasoline will benefit the United States—a surprising statement from an oil executive. Foster, a Republican conservative who heads the $7 billion oil refining company, told Fortune that gas tax should be slowly increased to $2 per gallon.

“There's a reason that everybody in Europe drives roller skates and here we drive SUVs,” Foster said in the interview. “It's because Europe has a huge tax on gasoline. As a result, gasoline at the pump is expensive and people go out of their way to consume less fuel.”

The move would benefit Americans more than foreign oil producers, he believes.

“All that extra money that we're spending, since we import 65 percent of our crude oil, goes to foreign nations,” Foster continued. “Whereas, if it was in the form of a tax at home, a lot of additional money we spend would be used for our own [benefit]—whether it's highway infrastructure, or whatever the use of the funds would be.”

A conservative who gives credit to the Europeans and favors higher taxes, which could hurt his own business? Foster is a bold man indeed.