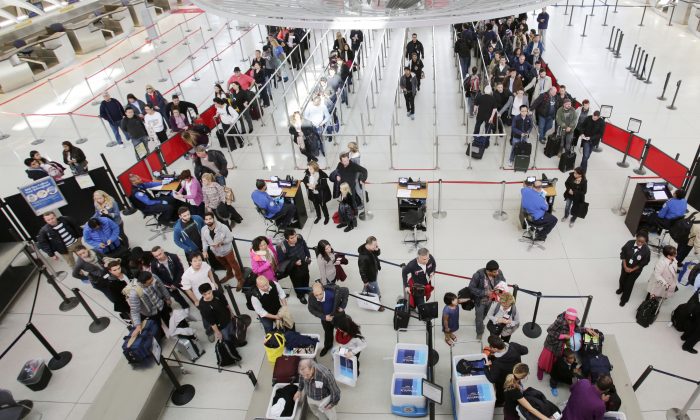 All three international airports in the New York area are destined to remain overcapacity for at least the next 15 years, meaning more annoying and costly delays for airlines and travelers.

A report published by the Government Accountability Office (GAO) on the state of airport funding and infrastructure on Thursday found that six airports in the United States will be “capacity constrained” through to 2020.

Worse news for New York fliers is that at LaGuardia and JFK, “delays are expected to worsen such that congestion will become severe,” according to a long-term outlook released by the Federal Aviation Administration (FAA) in January.

Capacity-constrained means average flight delays of 15 minutes or more per flight, and it’s considered “severe” if this is the situation at least 50 percent of the time.

The FAA’s long-term report also signals that even taking into consideration any currently planned improvements, the three New York area airports are projected to remain constrained into 2030.

The cost of operating on the edge is high. The same six airports GAO talks about, plus Chicago O’Hare, were responsible for 80 percent of all departure delays in the United States, according to a GAO report in 2010.

A study sponsored by an FAA business unit calculated the direct cost of flight delays in 2007 was $28.9 billion, the bulk of which, $16.7 billion, was out of passengers’ pockets. It included things like lost time, flight cancellations, and missed connections. Airlines lost money through increased crew costs, fuel charges, and lost demand, among others.

Currently, there is a cap on the number of flights allowed into New York’s airspace, which means to add any new flight, another has to be cut. This situation is bad for New York business and tourism as it inhibits growth, according Global Gateway Alliance (GGA), a New York City travelers advocacy group.

“It’s predicted that the New York metropolitan region could well face $79 billion in economic losses by 2025 if we don’t do something about the declining state of our airport infrastructure,” wrote GGA Board Chairman Joseph J. Sitt in his message on the organization’s website.

Unfortunately, improvements can make things worse during the process. As of March 15, through to the end of the year, one runway at JFK will be under reconstruction, and closed entirely as of June 1. JetBlue, which uses JFK as its hub, already issued a traveler alert on its website warning travelers.

Improvement plans at LaGuardia, ranked the worst airport in the country by Travel + Leisure magazine in 2012, have been continually delayed. The deadline to decide the winning plan was in January, but on April 15, the decision-making panel asked bidders to go back and revise their designs again, reported Crain’s.

Although the news was bad for New York airports, the GAO did offer some good news for U.S. airports overall.

It found that since 2004, the number of U.S. airports projected to be “capacity constrained” in 2020 dropped from 41 airports to just the 6 mentioned above.

The main reason 35 airports were taken off the “capacity constrained” watch list isn’t necessarily because they made improvements (though some did), but because aviation activity in the country unexpectedly slowed down after 2007, so projections for how busy they would become didn’t play out as expected.

Between 2007 and 2013, scheduled domestic flights dropped by 1.2 million flights—mainly due to the recession.

First, passenger demand slackened, then the downturn, exacerbated by higher fuel prices, prompted a number of major mergers—Delta acquiring Northwest in 2008, United and Continental merging in 2010, Southwest acquiring AirTran in 2011, and US Airways merging with American Airlines in 2014. In that process, airlines also adopted more efficient business practices.

While passenger demand has essentially rebounded back to 2007 levels, the industry today is has changed. Unlike a decade ago, airlines are flying larger and fuller planes.