The Count of St. Germain: A brief history of an immortal
0 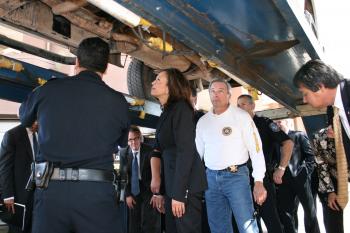 She stated that four Department of Justice special agents are joining a multi-agency task force to target transnational gangs. Crimes such gangs may commit are both extensive and serious, according to the March 24 press release. The group will focus on Imperial County, an arid, 4,597 square mile area which borders Arizona and Mexico. The region is sparsely populated, with about 150,000 residents, according to the county website.

Harris and state leaders including district attorneys, legislators, law enforcement officers and an official from the Department of Corrections discussed how to work together improve apprehension rates. They also toured a drug smuggling tunnel, and the California-Mexico border. They met at a new 20,000 foot command center which serves “more than 100 representatives of local, state and federal agencies," according to Harris’ statement. The command center began as a single trailer.

Gangs are nothing new to California. From 1981 to 2001, there were nearly 10,000 youth gang related homicides in the state. The greater number, 75 percent, occurred in Los Angeles, according to the report “Youth Gang Violence and Guns: Data Collection in California” issued by the Violence Policy Center in February 2009.

Handguns are the preferred concealed weapon, but criminals have used AK-47 assault rifles in some cases. What were neighborhood youth spats in the late 1940s, have grown more serious. Gangs operate sophisticated robbery rings, and carry out human trafficking, drug operations, and murder-for-hire plots.

Today, international drug cartels and mob organizations are challenging the technical sophistication of many police forces and even the military around the world, transporting their wares from one country to another — seemingly undetectable. Transport is key, from drug mules, people carrying drug packets in or on their bodies, to sophisticated remotely controlled submarines.

He led the investigation into a murder-for-hire plot which led to arrests in Palmdale, California last month, according to a statement from the AG office.

Members of a Tijuana drug cartel are accused of arranging the murder of five people in a California family who owed the cartel money.