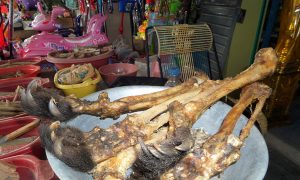 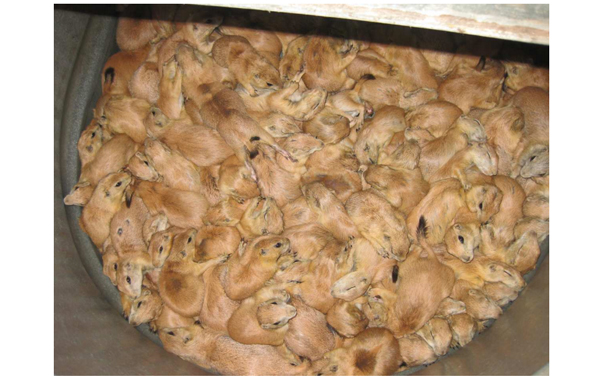 Nearly five years ago, a seven month long investigation, led by PETA, into an exotic animal wholesaler finally came to a dreary end. Authorities raided U.S. Global Exotics (USGE) in Arlington, Texas, confiscating over 26,400 animals from 171 species and types, held in inhumane and unsanitary conditions. The raid would become one of the largest exotic animal seizures in U.S. history. Of the 26,400 animals seized, 80 percent were immediately identified as grossly sick, injured, or dead. But a new study published in the Journal of Applied Animal Welfare Science uncovered even more chronic problem: 3,500 animals, mostly reptiles, died, and were discarded, every week at USGE.
USGE was a supplier of exotic animals to many well-known companies and customers, including zoological collections and retail chains. Familiar stores, such as Petsmart and Petco, as well as the Dallas Zoo and World Aquarium are on USGE’s extensive list. The company sold animals in at least 22 U.S. states and had at least 87 additional customers in 25 other countries worldwide. On the supply side, 22 countries and 16 U.S. states supplied this vast operation, sending in animals, many of them endangered, from all corners of the world. With the combined efforts of veterinarians, biologists, and Texas state authorities the confiscated animals, whether injured, sick, dead, or alive, were removed and relocated to a controlled facility. A later court hearing determined that all the animals had been treated cruelly. The courts awarded custody of the surviving animals to the Texas Society for the Prevention of Cruelty to Animals, as well as other animal welfare organizations.
The new study not only attempts to highlight this particular case, but also emphasize the potential dangers involved with mishandling exotic creatures. Many animals in the case, as well as trafficked wildlife in general, could potentially carry pathogens harmful to environments, other animals, and even humans. The research found that USGE had no method for monitoring the presence of pathogens in the general environment or the diseased animals. Furthermore, after an animal died, USGE employees did nothing to establish the cause of death or recognize the potential for further spread of infectious diseases.

In the days of the seizure brief microbiological and parasite detection was performed on the feces of nine snakes to prove that pathogens were indeed present in the warehouse. “There were definitely public health issues associated with the business, most notably Salmonella infection risks; although there may have been many other pathogens at the dealership that were not screened for, as we had limited resources for analysis,” biologist Clifford Warwick, a contributor to the study as well as a member of the seizure of the USGE animals, told mongabay.com. The researchers also noted several opportunities where exotic animals may have escaped into the local environment, creating a risk of introducing these pathogens onto U.S. soil. Almost 75 percent of emerging infectious diseases in humans have zoontic, or animal, origins. Given this, the study argues that animal wholesalers should take proper precautions, including testing and quarantining suspected diseased animals. Countries such as the UK have mandates in place that work to guarantee disease prevention as well as control laxities prevalent among traders. Warwick, as well as his colleagues, emphasize that more countries, including the U.S., should follow suit so as to avoid another USGE.
Investigating USGE and “sharing this with the wider community offered an exceptional opportunity to examine the often occult activities of large wildlife traders,” Warwick said.
As a rare insight into the world of wildlife trading it’s important to recognize that this investigation is just a glimpse into a vast trade. It must be noted that in general, pet wholesalers mortality rates are still exceptionally high – at 70 percent. Keeping exotic animals alive and healthy is difficult even in the best conditions, according to the paper. “Wild animal species differ substantially from domesticated animals and have low adaptability to captivity,” Warwick explained. Stress from handling, transporting, or confinement in cages can often lead to early mortalities. Moreover, insufficient diets or inadequate thermal and humidity regimes can also result in deaths. “The industry accepts high mortality rates because animals are cheap to source and the industry is dependent on mass sales and annual turnover/attrition,” Warwick said. “In my experience, parliamentarians are willing to change matters but civil servants are obstructive.”
Citations:

This article was originally written and published by Shayna Wilson, a contributing writer for news.mongabay.com. For the original article and more information, please click HERE.