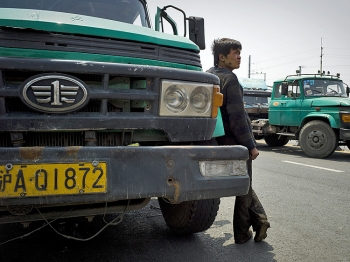 A Chinese mechanic waits by a container truck to be repaired near a cargo terminal in Shanghai on April 25. (Philippe Lopez/AFP/Getty Images)
China

By Jin Jing
biggersmaller
Print
The cost of transportation in China due to exorbitant highway tolls is limiting the distribution of goods and hurting economic growth, according to Chinese media reports.

“High transportation costs keep vegetables rotting in the fields while city dwellers cannot afford the price of vegetables in the markets,” Shenzhen News Network said in a recent report.

Highway tolls in China amount to one third of commodity shipping costs and are contributing to the increase in transportation costs, CCTV’s Economics Channel said in a show aired in April.

The program covered a truck driver by the name of Wu Zhongyao from northeastern China. Wu regularly drives the 2,800 km (1,740 miles) trip between Liaoning and Guangdong Provinces, one of the longest routes in the country.

Mr. Sun, general manager of Shenzhen Huanyu International Freight Service Ltd. told The Epoch Times that gas expenses for a 9-meter truck from Shenzhen to Beijing (1,208 miles) are about 3,000 yuan. Highway tolls are about 2,000 yuan, amounting to 40 percent of total transportation costs.

Dai Dingyi, vice chairman of China Federation of Logistics & Purchasing said that in 2010 about 75 percent of freight was transported via highways. The toll for highways and bridges make up about 20 to 30 percent of total shipping costs.

Securities Daily once listed China’s most profitable industries of 2009. Toll collection for highways and bridges was at the top of the list, followed by insurance and real estate.

Xiandai Investments, a highway management company based in Hunan Province, manages 246 km (153 miles) of highway. In 2010, Xiandai’s net profit margin was over 43 percent. In the same year, Bank of China’s net profit margin was just under 38 percent. China National Petroleum Corporation was 9.5 percent, and CITICS Securities Co. Ltd. was 40.7 percent.

Yet Xiandai Investments is only ranked in about the middle of 19 similar companies. The lowest net profit margin of these companies was 20 percent.

In 1984 the Chinese State Council issued a policy of “building highways on loan, paying back by toll.” The construction of highways then flourished.

Among the existing highway system in China, 95 percent of highways, 61 percent of first-class roads, and 42 percent of second-class roads were built based on this loan-toll mechanism.

But the exorbitantly high toll fees are interfering with the distribution of market resources and are hurting China’s economic growth.

Professor Tao Zhenghua of the Chinese Academy of Social Sciences’ Institute of Law told The Epoch Times: “The distribution of profit in the transportation chain favors highway administration and management agencies. This is unfair and will negatively influence the economic flow of goods.”

Executive member of the council of China Federation of Logistics & Purchasing, Di Xuehun, along with an American colleague did a comparison of tolls in China and the U.S. They found that the costs of China’s transportation industry are 30 percent higher than in the U.S.