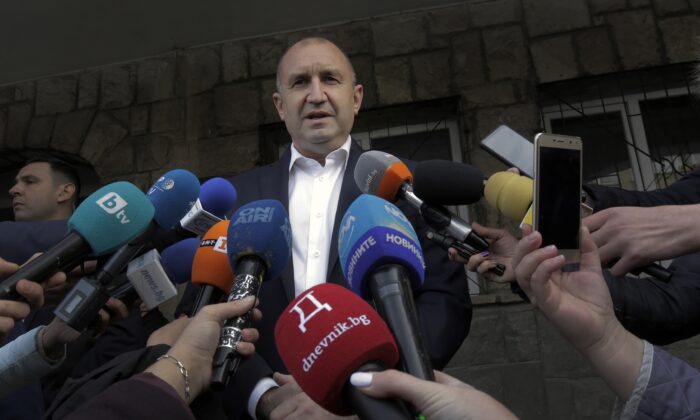 Surveys by several polling organizations give Radev, 58, about 65 percent of the vote. He is seeking a second five-year term in the largely ceremonial post.

Sofia University rector, Atanas Gerdzhikov, 58, who was backed by the center-right GERB party of former Prime Minister Boyko Borissov, is said to be trailing with 32 percent support. Some 3 percent voted against both candidates.

Radev, a vocal critic of Borissov and firm supporter of last year’s anti-corruption protests, has attracted many Bulgarians who are fed up with politicians they see as corrupt. Radev has appointed two consecutive caretaker governments that unveiled alleged corruption in Bulgaria’s industrial and financial sectors.

“Let’s not give the past a chance to torpedo our future. Let everyone find 15 minutes today (to vote) so that we do not waste the next five years,” Radev said after casting his ballot Sunday.

The Central Election Commission said preliminary turnout Sunday was lower than the 40 percent from the first round.

Corruption is a huge issue in Bulgaria, the European Union’s poorest member. Hundreds of thousands of people turned out last year to protest when GERB was the ruling party, complaining about official corruption in the Black Sea nation of 7 million.

Although Bulgaria’s head of state has no executive powers and all major policies must be approved by Parliament, the popular election gives the presidency more authority. The president leads the armed forces and can veto legislation and sign international treaties. He also names ambassadors and the heads of the intelligence and security services.

The new party that won Bulgaria’s parliamentary election earlier this month, We Continue the Change, had declared its support for Radev, along with other opponents of Borissov, including the Socialist Party and the anti-elite There is Such a People party. Founded only few weeks ago by two Harvard graduates, We Continue the Change won because of their founders’ resolute anti-graft actions as finance and economy caretaker ministers.

Bulgaria is very divided in its loyalties. It belongs to NATO and the EU, but many Bulgarians still feel a cultural and historical affinity with Russia. The country remains heavily dependent on Russian energy and has been exposed to growing tensions between Russia and the West.

The country is also struggling with a coronavirus outbreak that has overwhelmed many hospitals and battling vaccine skepticism that has led to one of the EU’s lowest vaccination rates.

Radev, a former air force commander who once studied at the U.S. Air War College in Alabama, has pledged to maintain Bulgaria’s place in NATO. In a presidential debate, Radev insisted upon having pragmatic ties with Russia, adding that the EU should restore its dialogue with Moscow.

“The sanctions that were imposed because of Crimea and Ukraine are not yielding results,” Radev said last week, adding that the Crimean Peninsula, which was annexed by Russia from Ukraine in 2014, was “currently Russian.” His remarks prompted protests from the Ukrainian government.

The final results are expected Monday. If the exit polls are confirmed, Radev will begin his second term on Jan. 22.