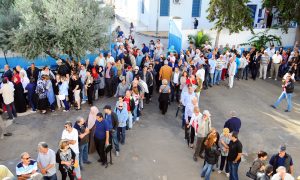 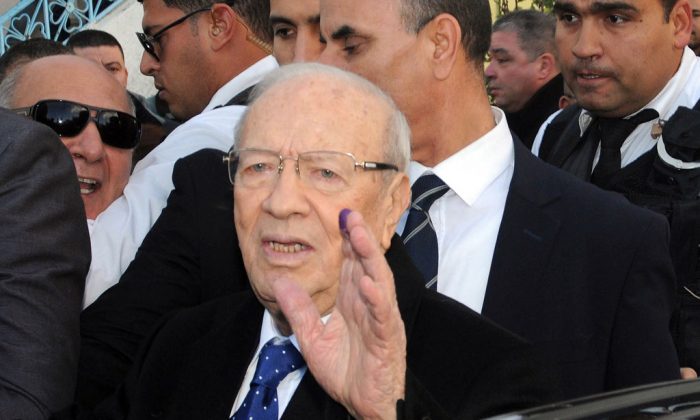 Tunisian presidential candidate, Beji Caid Essebsi, displays his finger with the indelible ink mark after voting in Soukra, on the outskirts of Tunis, Tunisia, Sunday, Dec. 21, 2014. Tunisians must decide Sunday between Beji Caid Essebsi, an 88-year-old veteran of previous regimes, and Moncef Marzouki, a 69-year-old human rights activist who is the outgoing interim president. For the third time in just two months, Tunisian voters will head to the polls this weekend, this time to elect a president in a runoff vote that presents a stark choice between the country's past and its Arab Spring revolution. (AP Photo/Hassene Dridi)
News

TUNIS, Tunisia—Tunisian polling firms have declared Beji Caid Essebsi, an 88-year-old official from previous regimes, as the winner of Sunday’s presidential runoff, cementing his dominance over a country where his party already controls Parliament.

However Marzouki’s campaign maintained that Sunday’s election was too close to call, and the official results are not expected for another 48 hours.

Celebrations began immediately at Essebsi’s party headquarters and he struck a conciliatory note, urging Marzouki’s supporters to work with him to rebuild the country.

“The future begins today!” Essebsi said, saluting Marzouki and the people who voted for him. “What is important is what we do today and tomorrow for Tunisia and all its children. We must work hand in hand.”

The runoff election, which saw less than a 60 percent turnout of registered voters, marks the culmination of a 4-year-long rocky transition to democracy, with parliamentary elections in October and the first round of presidential elections a month later.

While the moderate Islamist party Ennahda dominated politics immediately after the revolution in 2011, they were unable to address the serious economic and political challenges in the country, including terrorist attacks.

Essebsi created Nida Tunis (Tunisia’s Call), a collection of former regime officials, businessmen and trade unionists to oppose the Islamists and to restore the “prestige of state,” which he said had suffered in the wake of the revolution.

There are now fears that Nida Tunis’ control over the presidency, prime minister and Parliament could result in a return to the country’s old authoritarian ways — an argument Marzouki attempted to push during his campaign.

In the end, however, Tunisians appear to have desired a return to stability and normalcy after the years of revolutionary turmoil.

“Essebsi, thanks to his political experience and international ties as well as his program, can get the country out of this mess,” said Mehrez Rakkez, a lawyer who voted in the lower income neighborhood of Kram. He described Marzouki’s three years as interim president as a disaster and said the vote was a choice between “life and death.”

In nearly all the countries swept by pro-democracy uprisings since the Arab Spring, there has been a degree of backlash since the first heady days, including government crackdowns and Egypt’s military overthrow of an elected president.

In Tunisia, however, the backlash has remained within the legal framework of the transition

In contrast to the almost 70 percent turnout for the first round of the presidential election and the legislative balloting, the official election authority said only 59 percent of Tunisia’s 5.3 million voters cast ballots on Sunday.

“This election doesn’t interest me,” said a young man sitting in a crowded cafe in front of a polling station in Tunis’ lower income neighborhood of Yasmina. “I voted before, but I feel the candidates lie. They promise to create jobs for the youth and improve living conditions, but they don’t keep them.”

The eve of the election was marked by some violence with a shotgun blast wounding a soldier near the city of Kairouan. The attackers returned early Sunday morning and attempted to target another polling station but were caught by the army which killed one and arrested three.

No other major acts of violence were reported by the time polls closed at 6 p.m.

Islamic radicals had urged a boycott in a video that surfaced on social networks Wednesday.

According to authorities, around 100,000 police and soldiers secured the polls.