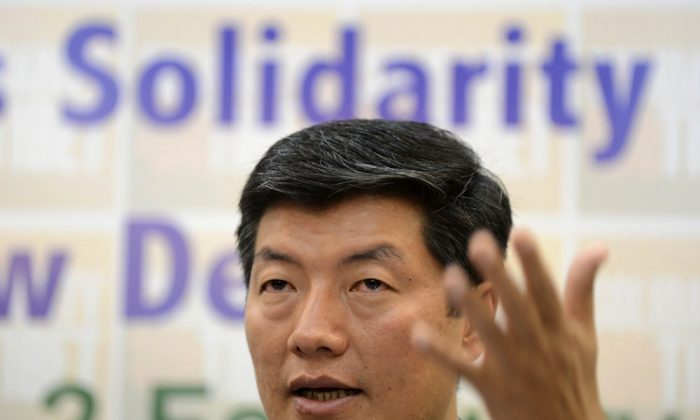 Lobsang Sangay, prime minister of the Tibetan government-in-exile, during a press conference in New Delhi on Jan. 29, 2013. Sangay said in Washington recently that he hopes to have peaceful dialogue with the Chinese Communist Party about “genuine autonomy” for the region. (Sajjad Hussain/AFP/Getty Images)
China

Lobsang Sangay, head of Tibet’s exiled government in India, said during a recent U.S. visit that the self-immolation protests will end if Beijing loosens its grip on the region with what he described as a “middle-way policy.”

Over 100 people in Chinese-occupied Tibet have set themselves on fire since 2009, including women and teenagers.

In response, the communist regime has intensified its hardline policy by criminalizing self-immolations and any assistance, including imprisonment of those who provide a funeral to the dead.

Sangay attended the Council on Foreign Relations independent think tank in Washington on May 8, emphasizing that Tibet is “not challenging China’s sovereignty or territorial integrity.”

“That, we think, is a moderate, reasonable solution which is a win-win proposition both for the Chinese government and the Tibetan people.”

Sangay said his administration wants to see Tibetans take on decision-making positions in the region, particularly the role of Party secretary, and to have greater opportunities.

“We don’t challenge, or ask for, an overthrow of the Communist Party. We don’t question or challenge the present structure of the ruling party,” he added.

Sangay said the exiled leadership shared solidarity with the desperate yet determined self-immolators, although it discourages such drastic action.

“That much of restraint that Tibetans impose upon themselves is a clear indication and reflection of the fact that we do subscribe to nonviolence,” Sangay added.

Between 2002 and 2010, envoys of the Dalai Lama held talks with counterparts in the Chinese regime, but without any change in the situation. There has since been a three-year stalemate in any discussions.

Social scientist Barry Sautman at the Hong Kong University of Science and Technology told the South China Morning Post that Sangay’s comments suggest the Tibet administration is ready to negotiate with the regime, and accept the precondition of communist rule.

Beijing-based ethnic affairs expert Jiang Zhaoyong told the Post that he does not expect the Communist Party to respond: “But Beijing will not take his remarks seriously and make significant change.”