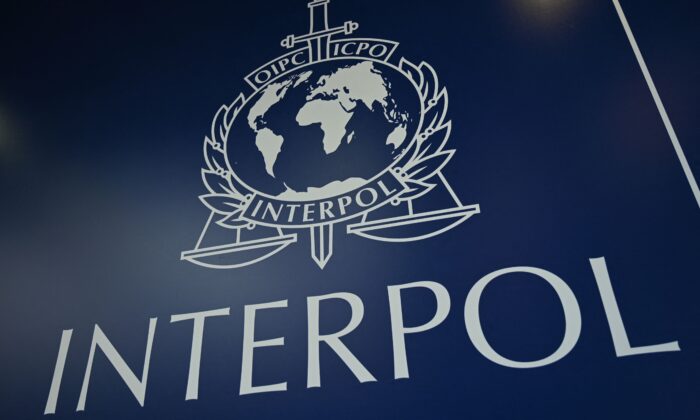 The Interpol logo during the 89th Interpol General Assembly in Istanbul on Nov. 23, 2021. The delegates elected Ahmed Nasser Al-Raisi of the United Arab Emirates as the organization’s new president on Nov. 25, 2021. (Ozan Kose/AFP via Getty Images)
Thinking About China

Why do I say unlikely place? Because Interpol has been accused of allowing dictatorships to abuse its system, without taking any real measures to punish them for doing so.

These Hongkongers are placing considerable faith in the organization, given that it has failed to protect Idris Hasan, an ethnic Uyghur who’s now facing extradition from Morocco to China and life in prison. Interpol failed to properly vet a red notice request from China, and approved it. Only later, when Safeguard Defenders managed to create a media storm around Hasan’s case, did Interpol revisit the red notice and realized that it had violated its own rules, and subsequently cancelled the notice. For Hasan, of course, it was too late as he had already been detained, and Interpol refused to assist his legal team in using the cancellation to show Morocco why extraditing him back to China would be wrong.

In seeking aid, Hongkongers are also helping Interpol to protect itself from further abuse, which, if found, could severely undermine its credibility.

Safeguard Defenders revealed in a new report that Hongkongers are in desperate need of protection from the authorities and the National Security Law (NSL), which Beijing implemented in Hong Kong in June 2020. Throughout 2021, the Hong Kong police, the security ministry, and high-level officials have used increasingly hostile language.

For example, they’ve said how these dissidents are wanted for crimes under the NSL and, as former security minister John Lee said, will be “pursued for life.”

To make matters worse, the government is now threatening to try to use Interpol to chase them down from their “hideouts” in the United Kingdom, Canada, Australia, and, most prominently, the United States.

“The Hong Kong government, police and courts can work together to take various measures to recapture absconders,” Kennedy Wong, a member of Hong Kong’s Legislative Council (LegCo), told China’s state-run media Global Times on May 20, 2021. He continued, “The Hong Kong police can make an offer of arrest to INTERPOL.”

Wong is not alone. Regina Ip, a pro-Beijing lawmaker and former security minister, brought up the use of Interpol even for countries that have now suspended extradition treaties with Hong Kong.

Other pro-Beijing lawmakers in the Hong Kong government have also made such calls, as reported here.

And they are not empty threats. For example, Danish media revealed that both China and Hong Kong’s Interpol bureaus had used the organization’s channels to get the Danish police to cooperate in the investigation of two Danish members of parliament, who were accused of assisting pro-democracy leader Ted Hui in fleeing Hong Kong. Hui is a former member of the the LegCo and he played a major role in the anti-extradition protests that rocked the city in 2019–2020. Chinese and Hong Kong authorities used a “mutual legal assistance treaty” to seek Danish cooperation, which is another tool that the Hong Kong government has repeatedly threatened to use against these exiles.

The danger here is spread between those targeted by Hong Kong’s police and Interpol itself. The threat to these brave politicians and pro-democracy protest leaders is very real, as many countries—such as Portugal, the Czech Republic, India, and Malaysia—still maintain extradition treaties with Hong Kong; and even if other countries choose not to act on any Interpol notice to arrest them, it could still cause significant hassles in their lives, especially for traveling.

For example, one high-profile Hong Kong activist had to seek assurances from the Czech foreign ministry to be able to travel, after being invited, to attend seminars there. No such assurances could be given, but he was brave enough to go anyway. And this happened in the Czech Republic, despite its history of standing up for democracy and freedom of speech. The country of Vaclav Havel—the first democratic leader and co-founder of the pro-democratic Charter 77 movement. However, dissidents are not safe in the country, as the government has failed to suspend its extradition treaty with Hong Kong.

Yet, due to the very clear charter of Interpol, should it be found to have approved any red notice (or “diffusion,” a similar but less well-known tool that essentially achieves the same thing), it would be a tremendous blow to the organizations’ legitimacy. Interpol has already taken a hit due to the Idris Hasan case and its failure to penalize China, and others, for using red notices in violation of its charter rules.

Safeguard Defenders and other prominent Hong Kong rights activists, including Nathan Law and Ted Hui, sent an open letter to Interpol on Jan. 13. It should serve as a wake-up call for Interpol that each time it allows countries (particularly totalitarian states) to misuse its system, it damages its own legitimacy and future. The letter also encourages Western governments to create a more comprehensive policy for creating safe havens for targeted activists, so they can start new lives.

Protecting innocent people from the misuse of Interpol’s red notice is an essential first step. Moreover, democratic nations—such as Portugal, the Czech Republic, and India—should suspend their extraditions treaties with Hong Kong. Another important step is for Interpol to examine just what value there is in maintaining mutual legal assistance treaties if countries see any attempt at abusing human rights through these agreements.