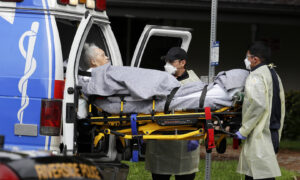 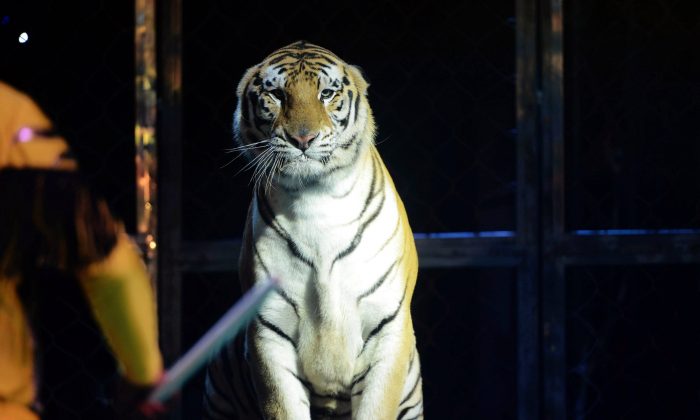 This picture taken on August 11, 2015 shows a Siberian tiger from a circus performing on the stage as an animal trainer beats it with a stick in Qingdao, east China's Shandong province. (STR/AFP/Getty Images)
International

Chinese spectators watching a circus show in northeast China got the fright of their lives when a tiger suddenly pounced on its trainer because it was reportedly exhausted from being overworked.

The live performance act featured 3 performers and a tiger inside a caged ring with no roof.

The terrifying moment was captured in a brief video that was circulated widely online. Footage shows the tiger attacking its trainer with its paws out, pulling him to the ground and dragging him across the floor.

Immediately after the man was attacked, two other performers came to his aid using long sticks to bash the tiger repeatedly, in hopes it would release the trainer.

The tiger can be seen eventually letting go of the man and backing off after receiving multiple blows to his body.

A theater employee whose name was not mentioned said the trainer who got attacked came out mostly unhurt, aside from a few scratches, South China Morning Post reported.

The theater released a statement on its social media account after the incident. It stated that the tiger had become agitated because it was exhausted after performing three shows a day, over 10 days in a row.

Because of the attack, the circus schedule has been changed, so that the tiger will only perform two shows a day, starting this week, the statement goes on to say.

The incident happened on Saturday, Aug.19 at the Liaohe Theatre in Yingkou, Liaoning Province, the Liaoshen Evening News reported.

A female in the audience, whose name was not provided in the report said she did feel slightly traumatized after the incident. But she said her child did not seem to be affected, South China Morning Post reported.

“My child was still very happy to see the animals, but I felt nervous during the show,” she said.

The tiger was separated from the audience during the performance by a caged ring that was only about two meters (6.5 feet) away from the front row.

The animal was 8 years old and weight 240 kilograms (about 530 pounds). Other animals were also a part of the circus performance, including a lion, a bear, a dog, and a monkey.