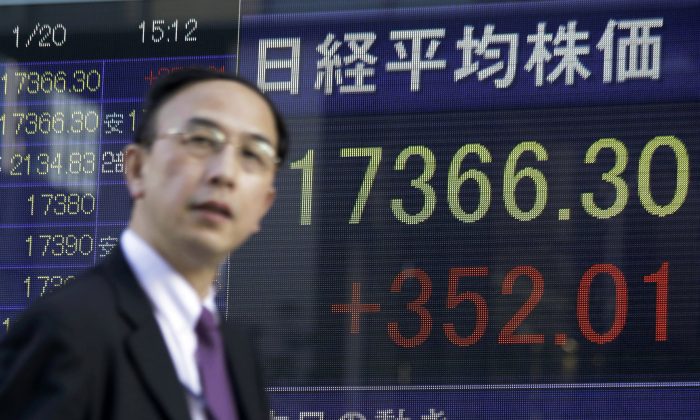 A man walks past an electronic stock board of a securities firm in Tokyo, Tuesday, Jan. 20, 2015. Asian stock markets rose Tuesday, and Shanghai rebounded from a dramatic dive the day before, after China's economic slowdown in the fourth quarter wasn't as sharp as feared. (AP Photo/Eugene Hoshiko)
China

Three senior managers at Citic Securities, China’s biggest brokerage, are being investigated by the authorities for insider trading, the company announced in a statement on Sept. 15.

The suspects are Citic’s president Chen Boming, head of operations Yu Xinli, and Wang Jinling of the firm’s IT department. They aren’t the first. In August, eight other executives, including chief executive officer Xu Gang, had also been detained on suspicion of insider trading.

Anti-corruption investigations into illicit financial activity have stepped up since the Shanghai stock exchange dipped 25 percent in August.

Analysts say that Citic Securities, a state-run company established in the early days of China’s economic reform period in the 1970s, was tasked with reviving the stock market but undermined the effort when staff allegedly took advantage of inside information to make illicit profits

According to a report by Time Weekly, a Chinese publication, CEO of Shenzhen Harmony Fund Ran Lan said that company executives are able to bypass firewalls meant to safeguard research data. These breaches give them access to valuable inside information that they use to their personal advantage.

A senior broker at Shenzhen told Time Weekly that as the mainstay in the national effort to rejuvenate the stock market, Citic Securities would have access to otherwise classified economic data, opening up an avenue to insider trading “under the premise of gaining insights and making detailed transactions for the national effort.”

An anonymous inside source at Citic Securities indicated that chief executive Xu Gang might leak information during the process of saving the stock market, but expressed confusion as to what gain Xu, a long-standing manager at the company, could expect from the inside trading he’s being investigated for.

The website of Hong Kong media Oriental Press Group reported that after Xu Gang was investigated, all personnel at the middle management level and above were restricted from going abroad. Guo Dajiang, the general manager of Citic Securities’ U.S. branch, was also said to be detained by mainland Chinese authorities, but this has yet to be officially confirmed.

Other developments suggest that Communist Party factional politics may be at play. Liu Lefei, the eldest son of powerful Party official Liu Yunshan, was a board member at Citic Securities between 2008 and 2012, and its vice chairman between 2013 and this January, Time Weekly reported.

Liu Yunshan is one of seven members on the Communist Party’s Politburo Standing Committee, the regime’s top decision-making body. Xi Jinping, the Party’s leader, has been running a wide-reaching anti-corruption campaign generally understood to consolidate control over the regime against his political rivals.

An inside source at the Citic Securities told Time Weekly that Liu Lefei wielded direct influence over CEO Xu Gang.

Oriental Press Group also reported that Wang Jun, son of former Chinese Vice President Wang Zhen, is a backstage supporter of Citic Securities; this, the publication said, indicated that the regime’s anti-corruption investigation into the firm means a move against Wang and other princelings by Xi Jinping.