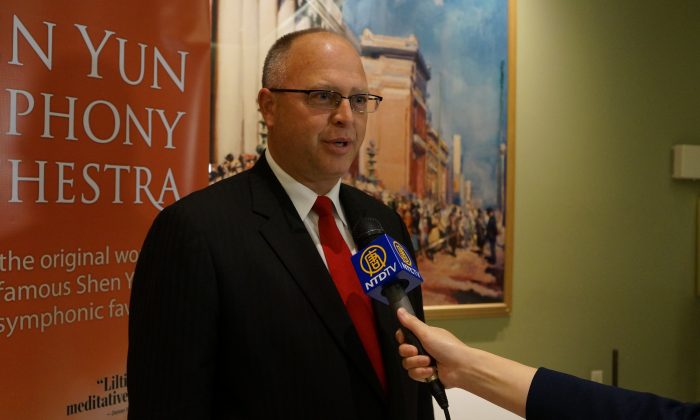 BOSTON—Even though he is a busy professional, Alan McKinnon, president of the 140-year-old Garden of Gethsemane Cemetery in West Roxbury, Mass., took time out to see Shen Yun Symphony Orchestra perform in at Boston Symphony Hall on Oct. 9.

He said afterward that reading the program book helped him have a deeper understanding of the profound inner meaning of the performance.

“As I received the program and read the notes, I allowed the music to take me there,” said Mr. McKinnon, referring to Shen Yun’s description of the ancient themes conveyed through some of the original pieces performed by the orchestra.

The second piece of the night, called “Sewing the Flowers of Heaven” is described in the context of Chinese cosmology, which, similar to Greek mythology, has stories of beings from above sometimes entering the world to take part in human affairs.

“Sewing the Flowers of Heaven” refers to the “devoted handiwork of heavenly maidens preparing a tapestry of brilliant flowers for humankind,” the playbill says.

“I allowed the music to take me there, like the hand maidens that were weaving the tapestry to bring to earth as a gift, as in creation when the Gods and Goddesses came to earth to create civilization. The music took me there. Beautiful, beautiful.”

Mr. McKinnon also said that his personal understanding of the inner meaning in the music helped him connect with the performance.

“Through my interpretation and my ears, I am able to be there with the music,” he said, adding that he also enjoyed the blend of East and West in the music.

“It’s very pleasant and very soothing,” he said. “It doesn’t matter if you’re a housewife or a busy professional, you should come and hear this.”

For him, seeing the Shen Yun Symphony Orchestra was a much-needed respite from his hectic professional life.

“The music will take you there,” said McKinnon. “I felt like I was there with the Emperor flying to the moon.”