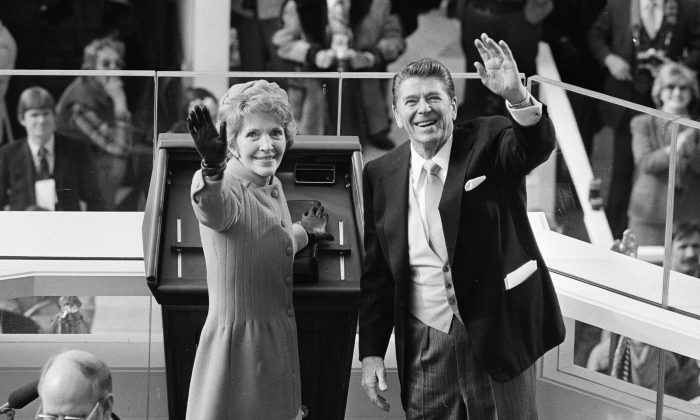 FILE - In this Jan. 20, 1981, file photo, President Ronald Reagan and first lady Nancy Reagan wave to onlookers at the Capitol building as they stand at the podium in Washington following the swearing in ceremony. The former first lady has died at 94, The Associated Press confirmed Sunday, March 6, 2016. (AP Photo/File)
New York

Nancy Reagan, the helpmate, backstage adviser, and fierce protector of Ronald Reagan died March 6 at her home in the Bel-Air section of Los Angeles of congestive heart failure. She was 94.

Her best-known project as first lady was the Just Say No campaign to help children and teens stay off drugs.

When she swept into the White House in 1981, the former Hollywood actress partial to designer gowns and pricey china was widely dismissed as a pre-feminist throwback, concerned only with fashion, decorating, and entertaining. By the time she moved out eight years later, Mrs. Reagan was fending off accusations that she was a behind-the-scenes “dragon lady” wielding unchecked power over the Reagan administration—and doing it based on astrology to boot.

She maintained that her only mission was to back her “Ronnie.”
.

Orange County Executive Steven Neuhaus noted her classiness and praised her Just Say No campaign in a statement released just hours after the news of her death broke.

“America and the world are better off for her and her husband’s dedication to freedom,” he said. “The Reagans’ time in the White House was marked with dignity and class.”

Her substantial influence within the White House came to light slowly in her husband’s second term.

She urged Reagan to finally break his long silence on the AIDS crisis. She nudged him to publicly accept responsibility for the arms-for-hostages scandal. And she worked to buttress those advisers urging him to thaw U.S. relations with the Soviet Union, over the objections of the administration’s “evil empire” hawks.

“You didn’t have to be a Reagan Republican to admire and respect Nancy Reagan. She was a tower of strength alongside her husband, had strong beliefs, and was not afraid to chart her own course politically,” said New York Rep. Sean Patrick Maloney in a statement.

You didn’t have to be a Reagan Republican to admire and respect Nancy Reagan.
— Rep. Sean Patrick Maloney

Anne Frances Robbins, nicknamed “Nancy,” was born on July 6, 1921, in New York City. Her parents separated soon after she was born and her mother, film and stage actress Edith Luckett, went on the road. Nancy was reared by an aunt until 1929, when her mother married Dr. Loyal Davis, a wealthy Chicago neurosurgeon who gave Nancy his name and a socialite’s home. She majored in drama at Smith College and found stage work with the help of her mother’s connections.

She met Ronald Reagan in 1950, when he was president of the Screen Actors Guild and she was seeking help with a problem: Her name had been wrongly included on a published list of suspected communist sympathizers. They discussed it over dinner, and she later wrote that she realized on that first blind date “He was everything that I wanted.”

The Reagans’ mutual devotion over 52 years of marriage was legendary.

The Reagans’ mutual devotion over 52 years of marriage was legendary. They were forever holding hands. She watched his political speeches with a look of such steady adoration it was dubbed “the gaze.” He called her “Mommy,” and penned a lifetime of gushing love notes. She saved these letters, published them as a book, and found them a comfort when he could no longer remember her.

In announcing his Alzheimer’s diagnosis in 1994, Reagan wrote, “I only wish there was some way I could spare Nancy from this painful experience.”

She was his caretaker for a decade until his death in 2004.

After his death she dedicated herself to tending his legacy, especially at his presidential library in California, where he had served as governor.

“Born in Queens, Nancy Reagan was committed to improving the lives of others, and her legacy will no doubt be felt for decades to come,” said New York Gov. Andrew Cuomo.

He directed all flags on state government buildings to be flown  half-staff from March 8 till interment.