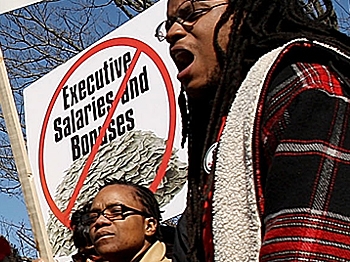 Protesters stand in front of the Financial Products Headquarters of AIG protesting the more than 400 executives at AIG who were paid $165 million in bonuses. (Spencer Platt/Getty Images)
Business

By Heide B. Malhotra
Print
Executive pay has become a sensitive and controversial issue across the nation. As the U.S. unemployment rate approaches 10 percent, even executive pay raises are no longer considered sacrosanct in the public’s eye.

From Jan. 1 to March 9, more than half of companies surveyed have frozen executive pay raises, according to a survey released this month by Watson Wyatt Worldwide, Inc., a financial consulting firm.

“The recession has shone a light on executive pay, causing many companies to re-evaluate the long-term implications of their executive pay policies," said Andrew Goldstein, North American co-leader at Watson Wyatt.

He continued, "Although boards are under pressure to make changes, it's still not clear whether the changes they have made have been aggressive enough to placate shareholders."

Slashing, capping, or freezing bonus pays was echoed by 48 percent of all survey respondents. More than 20 percent spoke of a “clawback” policy that requires the recipient to return all or part of the bonus due to deteriorating company performance.

By the end of 2008, over 64 percent of Fortune 100 companies had an executive compensation clawback policy that included payback of bonuses when financial statements are restated or when unethical behavior is discovered, according to Equilar, Inc., a research firm based in Redwood Shores, Calif.

“Without a doubt, the 2009 executive compensation landscape will be one of the most difficult in memory to navigate, and it will be fraught with more potential public relations pitfalls than ever before,” according Equilar’s “2009 Executive Compensation Outlook” study.

Calls for voluntary pay cuts are on the rise, with Equilar suggesting it as a way to ease an increasing public relations quagmire created by shareholders, the news media, politicians, and other stakeholders.

Shipping company FedEx Corp. announced at the end of last year a 20 percent pay reduction for Frederick W. Smith, its chief executive officer. Salaries of senior FedEx executives were also slashed between 7.5 and 10 percent. Bonuses were frozen for 2009 and all 2009 matched retirement contributions were stopped, according to the company.

Clawback policies are now fixtures at many prominent companies, among them Reynolds America Inc., Ingram Micro Inc., Chevron Corp., and Kraft Foods Inc., according to the Equilar study.

‘Between a Rock and a Hard Place’

With this depressed stock market, executives may have to wait years until they can exercise the options.

“Hamstrung by the inability to reprice options without shareholder approval, corporations may find that executives will affect their own repricing by jumping ship to firms where they can take advantage of new options offered at today’s bargain-basement prices,” Steven Hall & Partners, an executive pay consulting firm, said in a report.

Company boards are at a loss. While active stockholders demand reduced executive compensation, talented executives also threaten to leave if their pay dwindles. The phenomenon is occurring in almost all industries.

“Public companies in many industries find themselves between a rock and a hard place,” said Steven Hall, managing director at Steven Hall & Partners. “On the one hand, they risk executive flight as the retentive and motivational value of options fall precipitately; on the other hand, they risk the ire of stockholders.”

Firms receiving federal financial bailouts must adhere to certain guidelines in executive compensation. However, the restrictions are not retroactive.

Executives may not receive more than $500,000 annual pay, but they may still receive restricted stock options. The options may not be cashed in until all funds extended from taxpayers are repaid.

In addition, firms receiving federal money must maintain a full disclosure and clawback policy. Severance pay for the top 35 upper-level executives must be suspended and lower level executives may only receive one year’s compensation. Any special privileges, such as travel on company jets, renovations of offices, holiday parties, and other perks should also be suspended until all taxpayer funds are repaid.

However, some analysts believe that the rules are not comprehensive enough. Current federal restrictions only apply to the most senior, upper-level, and “C-suite” executives. Yet at some companies—especially in the financial services industry—many mid-level executives are unaffected by the restrictions and continue to take home millions in pay annually.

Shareholders, Management, and the Board

“The metrics [for executive pay] used by boards are all over the road,” Charles M. Elson, director of the John L. Weinberg Center for Corporate Governance at the University of Delaware, said in a recent Knowledge @ Wharton report.

But that’s far from reality.

“Many shareholders’ groups complain of a mutual back-scratching society of CEOs and the directors who set the CEO’s pay,” according to the KW report. “Technically, directors are elected by shareholders. But in practice, these usually are uncontested elections, as the directors only permit their own slate of candidates to appear on the ballot—with just one candidate per opening.”