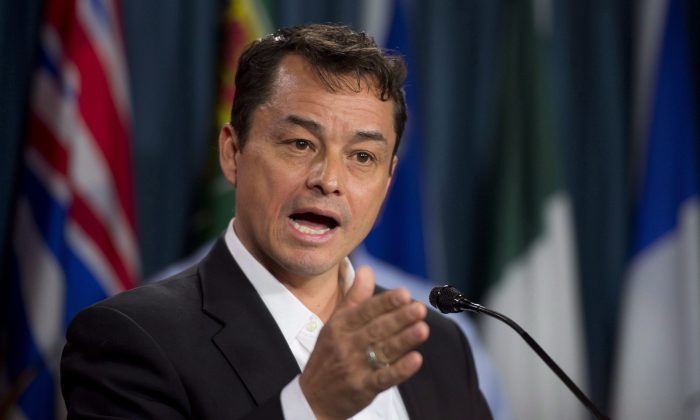 Assembly of First Nations National Chief Shawn Alteo speaks during a news conference April 10, 2014 on Parliament Hill. The AFN's executive committee will lead the organization until a new leader is chosen to replace Atleo, who abruptly resigned on May 2. (The Canadian Press/Adrian Wyld)
Canada

Executive Committee To Lead AFN Until New Leader Is Chosen

OTTAWA—The executive committee of the Assembly of First Nations will lead the organization until a new leader is chosen to replace Shawn Atleo.

A special chiefs assembly is scheduled to be held in Ottawa on May 27-28 to discuss timelines for the leadership vote.

On Friday, Atleo called a snap news conference and abruptly quit, saying he wanted to avoid being a distraction in the ongoing debate over the Conservative government’s proposed changes to First Nations education.

Aboriginal Affairs Minister Bernard Valcourt’s office has put the controversial legislation on hold until the assembly determines its next steps.

Some First Nations groups had criticized Atleo for supporting the bill.

They say if passed, the legislation would strip away their rights and give the federal government too much control over the education of their children.

But Valcourt’s office has defended Bill C-33, dubbed the First Nations Control of First Nations Education Act, saying it meets the five conditions outlined by the AFN and chiefs during a meeting in December.