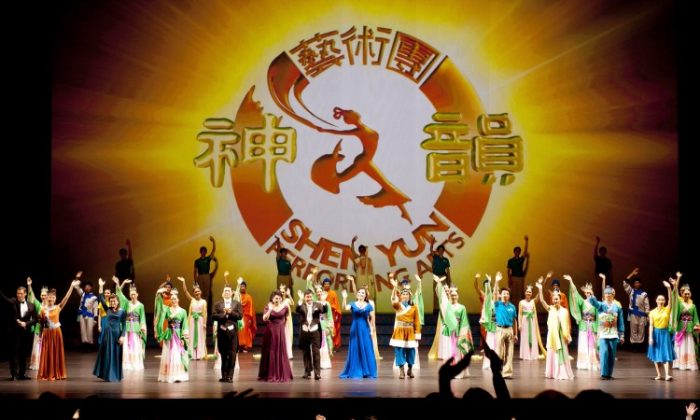 She watched the New York-based company perform at Lincoln Center on Sunday, April 22, and said “the movements were unbelievable. Every movement—you didn’t even have to have language with that … you understood exactly what was going on.”

Shen Yun revives 5,000 years of Chinese civilization through classical Chinese dance, a form that is expressive in nature.

“It carries the essence of Chinese cultural expression in its movements, postures, and aesthetics,” explains the Shen Yun website. The hundreds of intricate postures carry meaning and express the dancer’s inner realm. The dancers take traditional Chinese principles to heart in order to “bring a calm expressiveness to their work,” according to the Shen Yun program book.

In the dance The Choice, Ms. Skerritt said in “every movement you could tell … the feelings between the two [dancers].”

A young man and woman in love are separated by the lines drawn by the Chinese Communist Party in modern-day China. Shen Yun not only presents ancient tales, but also scenes of contemporary life in China.

Not only the dancers’ movements spoke volumes to Ms. Skerritt, but even the costumes conveyed meaning to her.

She used the example of the dance Lotus Leaves. The dancers carried silk-draped fans that looked like lotus leaves, which they brought up to their lotus flower head pieces during the dance. Similarly, the interaction between white handkerchiefs and a green one in Snowflakes Welcoming Spring, play a kind of narrative role.

Shen Yun Performing Arts, based in New York, has three touring companies that perform simultaneously around the world, with a mission to revive traditional Chinese culture. Upcoming performances in the United States include Chattanooga, Tennessee, on April 24, and Columbus, Ohio, on April 26-27.