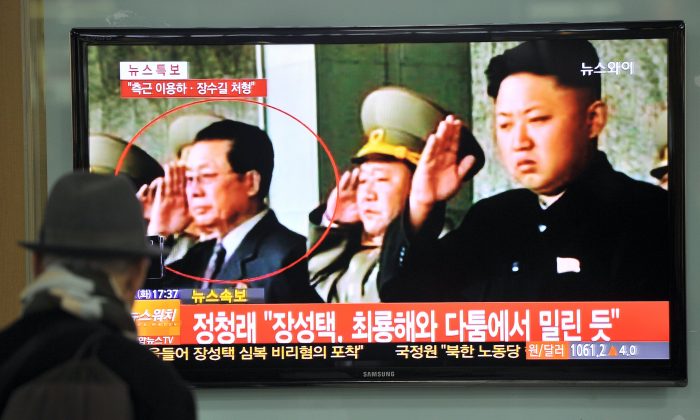 A South Korean man watches TV news about the dismissal of Jang Song-Thaek, North Korean leader Kim Jong-un's uncle, at a railway station in Seoul on Dec. 3, 2013. Jang is circled in red and on the far right is Kim Jong-un, who ordered Jang's execution (Jung Yeon-Je/AFP/Getty Images)
Opinion

A lot is going on in east Asia recently. One event that has received much attention and shocked the international media was the arrest and execution of Jang Song-thaek, along with several of his cronies, by North Korean dictator Kim Jong-un, the third generation of the Kim Dynasty. Two vice-premiers of North Korea fled to China for refuge.

Yet after less than two years, this regent and close uncle was suddenly arrested and then quickly executed. Rumors have been reported about his miserable death. Some said he was killed by machine guns, while the South Korean media said that he was stripped and then thrown to vicious dogs that ate him. In any event, his execution revealed deep hatred, the kind described by (ancient Chinese warrior) Yue Fei with the phrase, “Eat his flesh, drink his blood.”

Why is there so much hatred? It is due to power struggle. When a power struggle involves significant interests, even one’s life, the extent of the tragedy is unimaginable to common people.

Only one who is familiar with history would know from the dramas of the past the extent of this kind of tragic struggle. Not only in ancient China, but even in modern China, this has been common. Communist leaders Liu Shaoqi, Lin Biao, and Peng Dehuai died under circumstances not much better than Jang in North Korea.

The goal of all authoritarian regimes is to acquire power, as much as possible, with as few limits as possible. Such power without limits includes large stakes, big ambitions, secrecy, and distrust that is also without limits.

Under these circumstances, not only can harmful intentions result in extreme cruelty, but one’s defense can also turn into a struggle of life and death. Without normal constraints, extreme power causes extreme callousness. The history of human civilization of the last few thousand years proves this out.

In ancient times, people invented the lineage inheritance system of rule in order to avoid internal bloodshed due to power struggles. That concept was very advanced at the time, and to a great extent it solved the legitimacy of power.

To a great extent, it quelled infighting for power, stabilized internal security, and enhanced unity. Inherited monarchies were in a favorable position in the competition for survival, and political systems that lagged behind gradually disappeared.

This lineage rule system was not as elaborate in Western history, but very obvious in China during the thousands of years of pre-Qin Dynasty eras. In those times, Chinese technology was not the most advanced, but its political system was.

Within less than 3,000 years, this system was able to develop from the Xia Dynasty ruling over a very small portion of the population, to the Qin Dynasty ruling over the majority. During the course of this history, the dynasties mercilessly eliminated over 90 percent of neighboring countries.

During this period, the biggest difference between China as a nation and other countries was the evolution of the power succession system. Its greatest advantage was internal stability and unity.

Although lineage inheritance was still unable to put an end to brutal power struggles, it was able to reduce them to a very small number of people and thus reduce the social unrest connected with these power struggles. Compared with countries that had unstable sources of legitimacy, this was a great long-term advantage.

However, in the past the process of winning hearts was often long and accompanied by a turbulent society as a whole. Democracy solves this problem. With regular direct elections, those officials who have “won the hearts of the people” take over power, thus avoiding the ruthlessness and volatility of the transfer of power while maintaining popular support.

Unfortunately, our Chinese people’s political modernization efforts, which began one hundred years ago, were not successful and eventually evolved into a deformation of the old regime copied from the West: the one-party dictatorship of the Communist Party.

On the issue of transferring power, the one-party dictatorship preserves neither a relatively stable lineage inheritance, nor an electoral system among the whole of society. Instead, it leads to an even more unstable state somewhere between elections among small cliques and lineage inheritance.

After Deng Xiaoping came to power, he wanted a system that would be able to maintain a one-party dictatorship, yet without violent infighting. The outcome was very unsuccessful. The infighting within the communist regime in the 1980s eventually resulted in the use of tanks and machine guns killing the Chinese people, and the legitimacy of the Chinese communist regime nearly collapsed.

As a result, the communist regime had to go backwards to the form of inter-generational appointments without a specific system, which is even less convincing than the inheritance system of lineage rule.

However, the awareness level of the Chinese people has not declined to the level it has in North Korea, thus a direct lineage inheritance of power already has no legitimacy in China. But how much legitimacy does this system of half-inheritance have? This is the big crisis facing the Chinese communist regime now.

Not only the common Chinese do not believe in the Communist Party, even officials at various levels of the Communist Party do not believe in it. Thus they make up their own policies and carry them out in a fragmentary way, while sending their children abroad for safety. China is already unable to maintain the country’s overall interests. Such a state and society is not far from big chaos.

Now, there are still many people who firmly believe that, under the premise of safeguarding the one-party dictatorship, Xi Jinping can reform the political system and solve the trust issue with the people, thus restoring the legitimacy of political power. Some are even loudly advancing the bandits’ theory, “Who conquers the world, shall own the world.” But it is of no use.

One hundred years ago, when most Chinese people still thought that the inheritance system was the most legitimate system of rule, it was indeed inevitable for the democratic revolution in China to be unsuccessful.

However, as of now, most Chinese think that inheritance is not a legitimate system, regardless whether it is a true inheritance system or a disguised one in the form of inter-generational appointments. Both inevitably will be unsuccessful.

This situation is a lot like the stock market where most people’s perception becomes the truth and the last word; any squabble is just nonsense. Reform or revolution will come about according to the view of the majority.

Wei Jingsheng is a prominent Chinese dissident. Human rights prizes he has won include the Robert F. Kennedy Memorial Human Rights Award in 1996, the European Parliament’s Sakharov Prize for Freedom of Thought, and the Olof Palme Memorial Prize.

The Wei Jingsheng Foundation and the Overseas Chinese Democracy Coalition are dedicated to the promotion of human rights and democratization in China. For more information, please go to www.weijingsheng.org