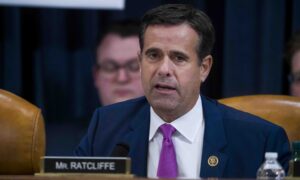 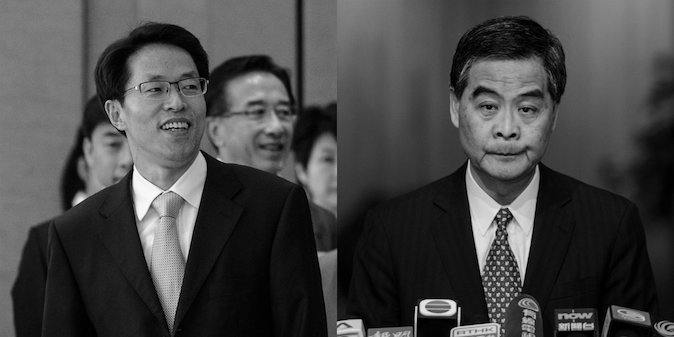 Hong Kong leader Leung Chun-ying declining a second term and Liaison Office chief Zhang Xiaoming recently going missing in action is the work of the Xi administration, according to a high-level source.
By Larry Ong and Li Lingpu
biggersmaller
Print

HONG KONG—Xi Jinping, the leader of the Chinese regime, is directly involved in swaying the political fates of the top Hong Kong leader and the top Chinese official in the semiautonomous city, according to an insider familiar with the matter.

Hong Kong Chief Executive Leung Chun-ying had abruptly announced on Dec. 9 that he wouldn’t be seeking a second term. Meanwhile, China Liaison Office director Zhang Xiaoming has failed to attend a series of scheduled official and business events in Hong Kong since Dec. 10.

The insider, who is close to discussions in Zhongnanhai—the headquarters and residences of the Chinese leadership—said that Xi moved against Leung and Zhang because they had embarrassed Beijing with their efforts to push Hong Kong to the brink.

The insider close to the Chinese leadership revealed that on the evening of Dec. 8, two “special envoys” from Beijing met personally with Leung Chun-ying, and passed on Xi Jinping’s orders that Leung should “call it a day.” The following evening, Leung called a press conference to announce that he won’t run for a customary second term due to “family reasons.”

Xi wanted Leung to step aside because “Hong Kong’s political system must remain unchanged for 50 years,” the insider said, referencing the “one country, two systems” arrangements after the British handover in 1997. “The international community mustn’t say that the Chinese regime is using heavy-handed measures to suppress public opinion, and let Leung Chun-ying stay on.”

Leung scraped through the Chief Executive elections in 2012 by a slim vote margin. Candidates for Hong Kong’s top official post are selected by small election committee that is largely pro-Beijing.

Leung is hugely unpopular in Hong Kong because he has made several controversial moves—he backed a “patriotic education” school syllabus that Hongkongers say is communist indoctrination; Hong Kong police under his watch fired tear gas canisters into thousands of protesters outside government buildings in 2014, sparking a 79 day-long pro-democracy protest; and Leung has made a big fuss out of “Hong Kong independence,” a fringe political movement in the city.

Recently, Leung and his government filed lawsuits against several newly elected legislators, claiming that they didn’t properly take their oaths of office. The Chinese legislature then issued a rare legal interpretation, and two pro-independence lawmakers subsequently lost their seats.

Although Hong Kong media has speculated that Leung Chun-ying could stay in public service after stepping down like former Chief Executive Tung Chee-hwa (Tung is currently a vice chairman in the regime’s top political advisory body), the insider said that Leung wouldn’t be afforded this privilege.

“Isn’t Hong Kong’s Independent Commission Against Corruption investigating Leung over a corruption case? He will definitely be arrested after the probe,” the insider said. An Australian newspaper reported in 2014 that Leung didn’t declare a payment of about$6 million from a private company after taking office, which constitutes a breach of Hong Kong law.

The insider added: “The Xi Jinping administration might deal with Leung after a new chief executive is elected.” Elections for Hong Kong Chief Executive are scheduled for March 2017.

Zhang Xiaoming, the top Chinese official stationed in Hong Kong, has been noticeably missing from the public and private sphere after Leung Chun-ying unexpectedly withdrew his chief executive candidacy.

Zhang was absent from a trade exhibition on Dec. 10; skipped a public memorial to mark the Nanjing Massacre on Dec. 13; and failed to attend a government dinner on Dec. 15. A Hong Kong businessman, who spoke on condition of anonymity, told Epoch Times that Zhang didn’t show up for a dinner session with the local business community, as well as a meeting to promote investments from mainland China on Dec. 10.

According to the insider, Zhang couldn’t make his scheduled appointments because he isn’t in Hong Kong. “Xi Jinping’s camp had summoned him to Beijing for an admonishment,” the insider said.

Zhang is apparently being taken to task for mishandling Hong Kong and to aid a corruption investigation.

Zhang Xiaoming and Leung Chun-ying have “collaborated to rip apart Hong Kong” since assuming their respective offices in 2012, the insider said. “The Liaison Office became a puppetmaster and interfered in Hong Kong politics, thus ruining the ‘one country, two systems’ arrangement,” the insider added.

In 2015, Zhang publicly suggested that Leung was above the law and a “superior power” in Hong Kong. Zhang has also echoed Leung in criticizing advocates of “Hong Kong independence.” Further, communist front groups have actively disturbed the peace in Hong Kong society in the last four years—the Hong Kong Youth Care Association’s harassment of Falun Gong practitioners in Hong Kong is the most noticeable example.

The insider, however, said that the Youth Care Association “could be punished in the future… when the high-ups send a signal, they’ll pack up and run for it.”

Beijing was also hoping that Zhang could assist them with the ongoing corruption investigation of Song Lin, formerly the chairman of state-owned company China Resources, according to the insider. Song, who once operated out of Hong Kong and was arrested in 2014, is a known associate of Zeng Qinghong, the former regime vice chairman and Jiang Zemin’s longtime political enabler. Hong Kong media have reported that Zhang Xiaoming and Song Lin have personal ties, and Zhang supposedly helped transfer a portion of Song’s assets overseas after Song caught wind of a public case against him.

The insider said that Beijing is keeping an eye on Zhang’s “corrupt activities”—like his recent auctioning his calligraphy for over $2.4 million (HK$18.8 million) at a dinner party hosted by pro-Beijing politicians—and could hold Zhang accountable in future.

Chinese leader Xi Jinping is currently using an anti-corruption campaign to eliminate the political faction of former Party boss Jiang Zemin, and move the Chinese regime away from the culture of corruption that Jiang entrenched. The Communist Party’s anti-corruption agency has thus far arrested over 1 million cadres, more than 200 of whom are senior officials.

In recent months, Xi has shifted his gaze to elements of the Jiang faction in Hong Kong.

The Chinese regime’s organs that oversee Hong Kong—the Liaison Office and the Hong Kong and Macau Affairs Office—have long been aligned with the Jiang faction. It is possible that Xi sent “special envoys” to convey a message to Leung Chun-ying to ensure that the message would not get lost in transition through more official channels.

Starting August, however, Sing Pao Daily, a pro-Beijing Hong Kong newspaper, has been running acerbic frontpage commentaries attacking Leung Chun-ying, Zhang Xiaoming, and other top Chinese leaders overseeing the Hong Kong portfolio for bringing “calamity to Hong Kong.” Sing Pao has suggested that the reason the officials have largely escaped scrutiny is because Jiang Zemin is their political patron.

The Sing Pao’s commentaries are highly unusual, given that it is a pro-Beijing newspaper criticizing Chinese officials. This has led many analysts and observers to believe that Xi Jinping is using Sing Pao to deliver his messaging.

On Dec. 15, Sing Pao ran a piece claiming that the Party’s “core”—Xi Jinping took on the title of Party “core” leader in October—wouldn’t set Hong Kong on a “path of struggle.” The article’s messaging—the Xi leadership doesn’t want to rock the boat in Hong Kong, and is looking to clean out fractious elements—is similar to what the insider told Epoch Times, and is in line with this newspaper’s earlier reporting.

Anti-corruption investigators criticized the Hong Kong and Macau Affairs Office in October for not properly following orders from Party Central.

Epoch Times also learned in November that Xi has created a special task force to investigate corrupt Chinese officials in Hong Kong. Hundreds of officials are expected to be purged by the time investigations are concluded.

The insider said that Beijing has recently sent many officials of Central Committee alternate member level to survey Hong Kong and get a “gauge of the local sentiment.” These alternate members are a second tier to one of China’s most influential political organizations and are seen as up-and-comers in the party with potential for national leadership positions.

These officials are also tasked with “inspecting the grassroots,” and report directly to Xi Jinping, according to the insider.