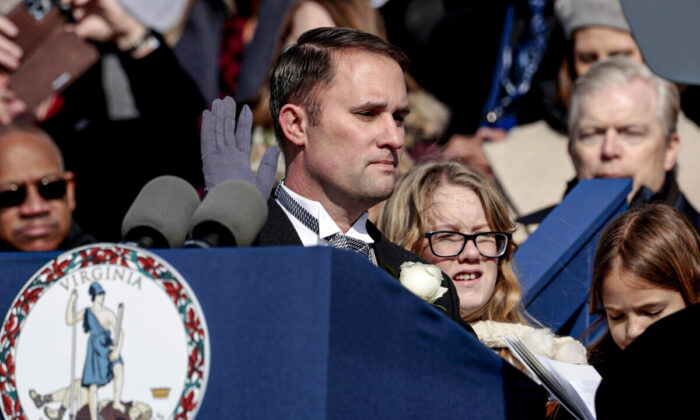 Virginia’s attorney general is calling on local prosecutors to enforce a law that bars disruptions outside people’s homes after about 100 protesters descended on the residence of Supreme Court Justice Samuel Alito on May 9.

At issue is the Virginia code that forbids gathering outside a person’s house “in a manner which disrupts or threatens to disrupt any individual’s right to tranquility in his home.”

The law “states that protesting in front of an individual’s private residence is a class 3 misdemeanor,” Victoria LaCivita, a spokeswoman for Virginia Attorney General Jason Miyares, told The Epoch Times in an email.

The call follows a noisy protest outside Alito’s home in Alexandria. Protesters shouted through loudspeakers and chanted “[expletive] Alito.”

Protesters are attempting to convince Alito and other Republican-nominated justices not to overturn Roe v. Wade. A recent leaked draft opinion authored by Alito indicates the court will overturn the 1973 decision.

No arrests were made, Virginia law enforcement officials confirmed to The Epoch Times. A Fairfax County Police Department spokesman said the demonstrations “were peaceful.”

Fairfax Commonwealth’s Attorney Steve Descano didn’t respond to a voicemail or emailed questions after Miyares, a Republican, urged him to take action. Descano, a Democrat who was a federal prosecutor in the Obama administration, hasn’t commented publicly on the protest.

Descano said on May 3, in response to the leak of the draft opinion, “I will never prosecute a woman for making her own health care decisions.”

Two other justices live in Virginia.

While federal law bars protesting near the homes of any judges “with the intent of influencing” them, U.S. prosecutors so far have shown no indication they plan on pursuing charges against the demonstrators, who recently went to the homes of several other justices in Maryland.

The Department of Justice declined to comment. The White House has offered support for the protesters.

The protests “have been peaceful to date, and we certainly continue to encourage that,” White House press secretary Jen Psaki told reporters in Washington.

She didn’t say why the administration hasn’t prosecuted any of the apparent wrongdoers.