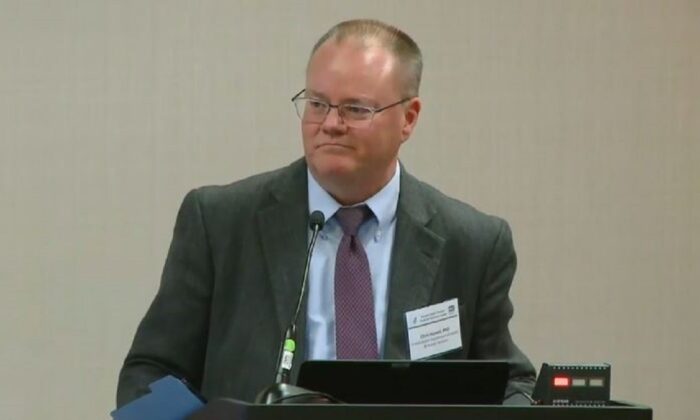 In this file image from video, Christopher Hassell, a Department of Health and Human Services official who chairs the Potential Pandemic Pathogen Care and Oversight (P3CO) Review Committee, speaks during a government meeting. (Screenshot via The Epoch Times)
US News

A committee formed to evaluate research projects involving pathogens that could cause pandemics has not worked during the COVID-19 pandemic, The Epoch Times has learned.

The Potential Pandemic Pathogen Care and Oversight (P3CO) Review Committee was formed in 2017 under a new framework aimed at strengthening oversight of potentially risky projects that were up for funding from the U.S. government, following a multi-year pause ordered after issues involving anthrax and avian influenza.

The U.S. Department of Health and Human Services (HHS), which includes the National Institutes of Health (NIH), created the panel.

According to the HHS website for the panel, it has only reviewed three projects, all of which were for influenza viruses. The most recent review took place in 2019.

The Epoch Times asked the HHS records office for any projects the panel has reviewed since Jan. 1, 2020, determinations for each project reviewed since then, and details, such as transcripts, of all meetings held.

The HHS Office of the Assistant Secretary for Preparedness and Response (ASPR) searched and found no records responsive to the request, according to the records office.

“Specifically, the ASPR has informed our office that the Committee has not reconstituted within the search dates given for the search,” Arianne Perkins, a Freedom of Information Act officer, told The Epoch Times in a letter.

Asked what that meant, Ruhma Sufian, another records officer, said in an email that “because the HHS P3CO Review Committee has not met within the search frame you gave … ASPR responded with no records.”

That means no work has been done by the committee despite it coming to light that the NIH funded risky experiments at the laboratory in Wuhan, China located near where the first COVID-19 cases appeared in 2019.

“It is unconscionable that the Committee has not reviewed any of the thousands of HHS-funded coronavirus research projects when people are still dealing with the COVID-19 outbreak—the American people deserve better,” Sen. Roger Marshall (R-Kan.), who has tried halting grants for risky research, told The Epoch Times in an emailed statement.

“We are troubled that the P3CO Review Committee may have been sidelined and isolated from reviewing any research proposals,” Jack Heretik, a spokesman for Republicans on the House of Representatives Energy and Commerce Committee, who have been investigating the HHS review process, told The Epoch Times via email.

The HHS, ASPR, and the NIH did not respond to requests for comment.

The panel cannot review projects on its own accord. The funding agency must refer proposals to the panel.

To refer a project, an agency must determine it is “reasonably anticipated to create, transfer, or use enhanced PPPs,” or potential pandemic pathogens, according to the framework.

HHS defines a PPP as a pathogen that is “likely highly transmissible and likely capable of wide and uncontrollable spread in human populations” and “is likely highly virulent and likely to cause significant morbidity and/or mortality in humans.”

The definition of enhanced PPPs is even narrower. It’s said to be a potential pandemic pathogen that results “from the enhancement of the transmissibility and/or virulence of a pathogen.” Experts often refer to such research as “gain of function.” Some say the United States has funded a number of gain of function experiments in the past, including experiments performed at the Wuhan lab with U.S. funding.

HHS excludes naturally occurring pathogens in circulation in nature, or recovered from nature, from the enhanced PPP definition. It also excludes activities associated with vaccines and surveillance activities such as sequencing.

If a funding agency does refer a project, then the review group is convened to evaluate the proposal, including performing a risk-benefit assessment and suggesting a risk mitigation plan. The panel makes recommendations to the HHS, which may or may not be accepted. Ultimately, the project can still be funded with no changes, funded with changes, or not funded.

Christopher Hassell, an HHS official who has said he chairs the committee, said the group is “robust” and “tough.”

“This isn’t some rubber stamp group,” he said during a National Science Advisory Board for Biosecurity meeting in 2020, adding: “It’s a very critical group. It’s a tough group to get through.”

But the fact that only three projects have been reviewed shows the system is failing and needs changing, according to some experts.

“Most covered projects, including the project by EcoHealth Alliance and its Wuhan partners, were not reviewed due to a failure by the NIH to identify and flag covered projects,” Richard Ebright, a professor of chemistry and chemical biology at Rutgers University, said during a congressional hearing in August.

They cited the dearth of reviews in recent years.

The NIH and its parent agency never responded to requests for comment on the recommendations.

Dr. Mark Lipsitch of the Harvard T.H. Chan School of Public Health and Dr. Tom Inglesby of the Johns Hopkins Center for Health Security, previously urged the government to be more transparent with the system.

“Currently, none of the HHS departmental review process for approving enhanced PPP experiments is public. This is inconsistent with the [White House] guidance which said: ‘To the maximum extent possible, agencies’ enhanced PPP review mechanisms should provide transparency to the public regarding funded projects involving the creation, transfer or use of enhanced PPPs,'” they said in a 2020 paper.

“To that end, the HHS review should make public who participates in the review, as well as the basis of the decision that the research is acceptable to fund, including the U.S. government’s (USG’s) calculation of the potential benefits and risks of the proposed enhanced PPP research.”

None of the members of the P3CO committee are known to the public, a system critics say sets up issues such as conflicts of interest.

“American taxpayers deserve to know the committee’s composition, like how many reviewers are employed by HHS, how many are biothreat and national security experts, and how opinions are weighted,” Marshall said.

Hassell said possible harassment was a reason for not naming the committee members.

“Names get out, you become subject to a number of vulnerabilities,” Hassell said during the 2020 meeting.

“As much as it would be good to publicize the individual names, which has been suggested, if that chills anyone being willing to serve on that committee, that will be detrimental because we do manage to get good people on that committee that give of their time to work on this thing,” Hassell said during the 2020 meeting.

All members are government workers, Hassell said at the time. He said some are from outside HHS, including from the U.S. military. Hassell told the House Energy and Commerce Committee that the members include NIH employees. One works for the National Institute of Allergy and Infectious Diseases (NIAID), which is headed by Dr. Anthony Fauci. The NIAID worker co-authored articles with an investigator who was engaged in research proposals that could have been reviewed by the P3CO Committee, according to Reps. Cathy McMorris Rodgers (R-Wash.), Brett Guthrie (R-Ky.), and Morgan Griffith (R-Va.).

Dr. Francis Collins said in a statement in 2019 that the pre-funding reviews done by the committee aren’t public “to allow for candid critique and discussion of individual proposals.” He noted that information about projects funded by the NIH is publicly available, once the awards are given.

“NIH takes the need to ensure the safety of the public very seriously. We believe the HHS Framework process strikes the right balance of rigorous oversight with the advancement of the important science necessary to prevent and treat infectious diseases,” added Collins, who stepped down as NIH director in 2021 but still works for the agency and advises President Joe Biden.