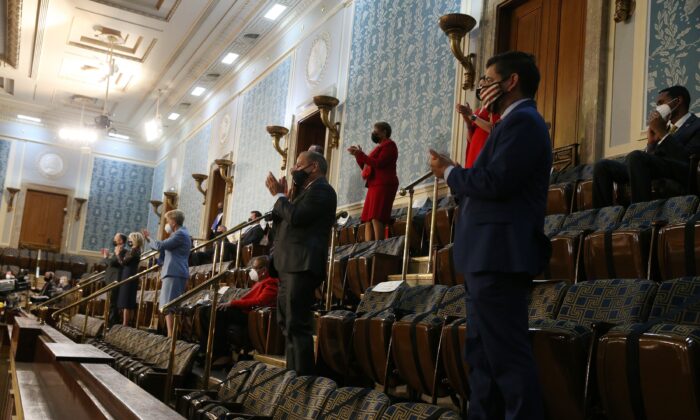 Members of Congress stand in the House of Representatives gallery in Washington on April 28, 2021. (Michael Reynolds/Pool/Getty Images)
Congress

EXCLUSIVE: US Capitol to Reopen Galleries to Public After Over 2 Years

The House and Senate Galleries, where the public can view legislative proceedings, have been closed since the COVID-19 pandemic began but The Epoch Times has learned exclusively that the galleries will finally be reopened to visitors.

“We are in the process of reopening them in September,” a spokesman for the U.S. Capitol Police (USCP) told The Epoch Times via email.

The spokesman said that COVID-19 caused the initial shutdown and that the galleries have remained closed because of USCP staffing shortages.

Currently, the public can get tours of the building through the U.S. Capitol Visitor Center or their representatives’ offices but are blocked by ropes from going near the House and Senate chambers. The galleries of the Senate and the House of Representatives are the balcony seats above the floor where the public, media, and visitors can watch the proceedings when either body is in session.

The entire U.S. Capitol building was shut down to the public on March 12, 2020, over COVID-19 and stayed closed for the longest time in American history. The building only reopened to visitors on May 30. The shutdown dragged on because of both political debate on COVID-19 measures and staffing shortages with the Capitol Police. The galleries were supposed to be reopened in May, according to a USCP plan in March obtained by CQ Roll Call.

The more than two-year closure is unprecedented in American history. The Capitol had only been previously closed briefly three times since the beginning of the 20th century. The public galleries were closed for a month in the fall of 1918 during the Spanish flu pandemic, according to House historical documents. The Capitol was also briefly closed after the assassination of Rev. Martin Luther King, Jr., and after the Sept. 11 and anthrax attacks in 2001.

Asked about the current police staffing numbers, a spokesperson said, “For security reasons, we cannot provide the exact number, but the Department needs to hire roughly 200 people to reach authorized staffing levels, and the Chief has said publicly he believes we are about 300 short of where we would like to be.”

“There are many reasons for the staffing shortages, to include people reaching eligible retirement (a lot of people came on around 9/11 and they are now eligible to retire),” the spokesperson said. “Law enforcement across the country has seen a lot of retention and attrition issues in the last 5–10 years. Many agencies are down people.”

The timing of the reopening is not firm. The police spokesperson told The Epoch Times twice that the galleries will reopen in September, but then issued a formal statement saying, “We are working to reopen the galleries shortly. Date is TBD.”

Earlier this year, political pressure to reopen the legislative branch to the public built up and the Senate passed by unanimous consent on March 1 a resolution to reopen the buildings to the American people.

Sen. Bill Hagerty (R-Tenn.) led the resolution that read, in part, “it is illogical and unacceptable that, despite the rest of the United States being open, the United States Capitol Building and Senate Office Buildings, buildings that belong to the American people, remain largely closed to public visitation.” The vote resolved that the Senate recognized the importance of reopening the buildings “to the American people to facilitate public participation in the legislative process and public visitation of these historic buildings.”

The resolution expressed the sense of the House that “the right of people to petition their Government is severely hindered by the closure of the Capitol and the people’s House.” It also said the USCP should “prioritize” reopening the House wing of the Capitol.

During the Jan. 6, 2021, Capitol protest, a group of Democrat lawmakers were social distancing in the gallery seats and got stuck there for a period while the police cleared the rest of the Members from the floor. Rep. Jason Crow (D-Colo.), in a story a year later about the so-called “Gallery Group,” told the Associated Press, “They had evacuated the House floor first. And they forgot about us.”

Before the shutdown, visitors to the Capitol had to get passes to enter the galleries and watch the legislative debate and vote. Visitors with passes could also view the galleries when the House and Senate were not in session on weekdays. For now, the American people can only view the legislative branch in action from the C-SPAN cameras that are in the closed galleries.