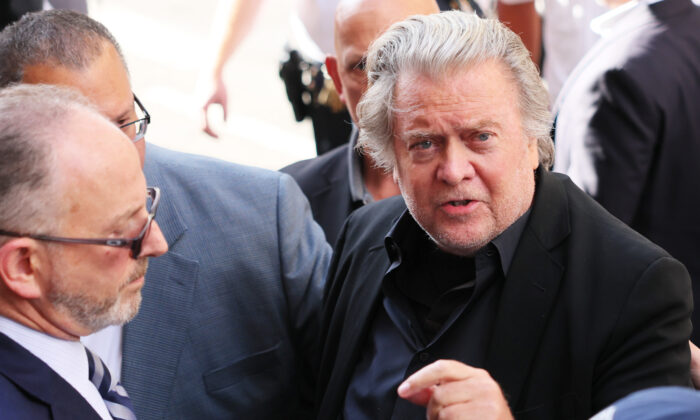 EXCLUSIVE: ‘They’re Trying to Take Me out of This Election’: Bannon Responds to New Indictment

Former Trump administration strategist Steve Bannon said fresh New York state charges against him over a scheme to raise money to build border barriers on private land are an attempt to silence him ahead of the November midterms.

“They’ve got a populist revolt that’s out of control, and they’re trying to take me out of this election,” Bannon, host of the “War Room” podcast, told The Epoch Times.

“They were trying to de-platform me and shut me down. It’s not gonna happen.”

Bannon made the comments one day after he appeared in a New York state courtroom in Manhattan on Sept. 8 and pleaded not guilty to charges of money laundering, fraud, and conspiracy relating to a private crowdfunding campaign, known as “We Build the Wall” that sought to create a privately-owned section of the U.S.-Mexico border. He was released without bail.

Prosecutors allege that Bannon defrauded donors of the fundraising drive that raised more than $15 million by diverting more than $100,000 to the campaign’s chief executive, who had pledged not to take a salary.

“It is a crime to profit off the backs of donors by making false pretenses,” Manhattan District Attorney Alvin Bragg said at a Sept. 8 joint press conference with New York Attorney General Letitia James. Both are Democrats.

Bannon was hit with similar charges by the Department of Justice (DOJ) in 2020, but he was pardoned by President Donald Trump on his last night before leaving office in January 2021. Presidential pardons, however, do not prohibit state prosecutions.

Two other men who were charged by the DOJ pleaded guilty. The men, Brian Kolfage and Andrew Badolato, are awaiting sentencing for conspiracy to commit wire fraud. They each face up to 20 years in prison. The trial of a third man, Timothy Shea, ended in a mistrial.

Bannon said the latest charges were “clearly political targeting,” noting that none of the other three men were indicted in the New York case.

“I never had an official role with ‘We Build the Wall.’ It’s a separate company,” he said.

The former Breitbart News chief called the case a  “total complete joke” and a “complete nothing burger.”

“None of our donors ever had a problem with any of this. ‘We Build the Wall’ is a fantastic project; one of the things I’m most honored to be in,” he said.

With about 60 days to go before the November midterm elections, authorities are singling out Bannon for targeting due to the success of his “War Room” podcast, the former Trump strategist alleged.

“They understand that the ‘War Room’ is a very dangerous apparatus because it gives a little guy a voice. It gives a platform to all the grassroots people,” he said.

“They understand that they need to shut that down. They can’t do it. It’s only getting bigger,” he added, noting that the audience jumped at least 10 percent in all shows on Sept. 9 in the wake of his court appearance.

Bannon, who faces up a maximum sentence of 15 years in prison on the money laundering charge, remains defiant in the face of the new prosecution.

“We’re never going to back down from Soros-backed, left-wing radicals that are in the New York administration,” he said.

Bannon also claimed, citing an unnamed “very senior” source, that over Wednesday and Thursday, at least 35 “MAGA leaders” and Trump associates were “raided” by the FBI.

“Most of them had lawyers that had been already in touch with DOJ or working with DOJ,” he said. “These people came to their homes and hassled these people in a show of force and trying to intimidate people.”

The FBI served subpoenas on these people, and in some cases took their electronic equipment, Bannon said.

Bannon’s comments corroborate reports by the Washington Post and New York Times that a federal grand jury in Washington on Sept. 7 issued subpoenas to a range of former campaign and White House staffers requesting information about the Save America PAC, Trump’s fundraising vehicle set up after the 2020 election. The Epoch Times could not independently verify the claims.

The subpoenas form part of a federal investigation into the events surrounding the Jan. 6 Capitol breach and efforts by Trump to dispute the election results. This investigation is separate from another DOJ investigation into potential breaches of record-keeping laws, which saw the FBI raid the former president’s Mar-a-Lago home in early August in search of classified records allegedly held by Trump.

The targeting of Trump and his allies is part of an effort to “shut down all opposition political voices,” said Bannon.

“The elites in this country have taken over and have assumed the same techniques of the lawless Chinese Communist Party.”

“They have to be defeated at the ballot box,” he added.

In July, a jury found Bannon guilty of contempt of Congress for defying a subpoena from the House Jan. 6 committee. For that case, he faces a minimum sentence of 30 days of jail and a fine, according to the Department of Justice.

The Epoch Times has reached out to New York Attorney General James’s office for comment.