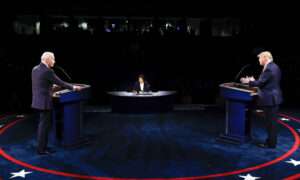 A Senate committee investigating a string of emails about the Biden family’s foreign dealings has so far found nothing that could invalidate their authenticity, Sen. Ron Johnson (R-Wis.) told The Epoch Times.

Johnson, who chairs the Senate Homeland Security and Governmental Affairs Committee, confirmed during an interview that in addition to material extracted by a Delaware computer repairman and exposed by The New York Post, the committee has gained access to a new cache of information about lucrative deals overseas involving the family of Democratic presidential nominee Joe Biden.

“We do have access to Tony Bobulinski’s information,” Johnson confirmed, saying he “provided a thumb drive to our committee yesterday, and we’re going through, and we’re validating it.”

Hunter Biden and his partners brought Bobulinski into a deal in early 2017 with Chinese energy conglomerate CEFC China Energy Company Limited, Bobulinski said during a press conference on Thursday.

Hunter Biden and his associates brought him into the deal to serve as the CEO of SinoHawk LLC, a business entity created to formalize the Biden-CEFC investment partnership, Bobulinski said.

Hunter and James Biden personally introduced Bobulinski to Joe Biden on May 2, 2017, the day before the former vice president spoke at The Milken Institute’s Global Conference, according to Bobulinski. The three discussed the Biden family history and plans for the partnership with the Chinese energy company.

“What I can say about all of those sources, we’re continuing to do our due diligence to verify and authenticate the genuineness of those emails,” Johnson said. “And to date, we have found nothing that disputes them. All we’ve found is verification, validation of their authenticity.”

According to Johnson, the committee has re-scheduled its interview with Bobulinski to early next week, allowing him to speak to the FBI first. He also noted that the committee is willing to make public what Bobulinski is going to reveal.

“[Bobulinski] has gotten quite public with this,” Johnson said. “When we see things that we think are relevant to what the public needs to see, we’ll probably just make that public, but not until we assured that we verified and authenticated whatever it is that we release.”

Johnson added that the committee has also obtained information from the Gmail account of Bevan Cooney, a former business partner of Joe Biden’s son Hunter Biden.

Cooney, who is currently serving prison time, recently revealed he allowed investigative reporter Peter Schweizer to retrieve 26,000 emails outlining how he in 2011 helped secure a meeting between White House officials and a group of Chinese industrialists.

The Biden campaign has not responded to repeated inquiries about the emails. During a presidential debate on Thursday, he denied allegations that he received money from China, saying, “I have not taken a penny from any foreign source ever in my life.”

Johnson said he believes there is far more than what is confirmed at this point, and it “certainly deserves further investigation.”

“We just scratched the surface,” he said. “I never claimed that our report answered all the questions. Far from it. I think our report raised far more troubling issues and questions than we answered. But that’s the first candle.”

“The other scandal of the second scandal is literally the suppression of information on the part of the mainstream media, as well as the social media companies,” he added.

Last week, Twitter locked the New York Post’s account because of its reporting on Hunter Biden’s emails. The account of White House press secretary Kayleigh McEnany was also briefly locked after she shared the Post’s story. In the latest statement to the New York Post, Twitter said that the newspaper won’t regain access to its account until six posts that contain links to Hunter Biden stories are deleted. The Post’s account remains frozen at the time of this publication.