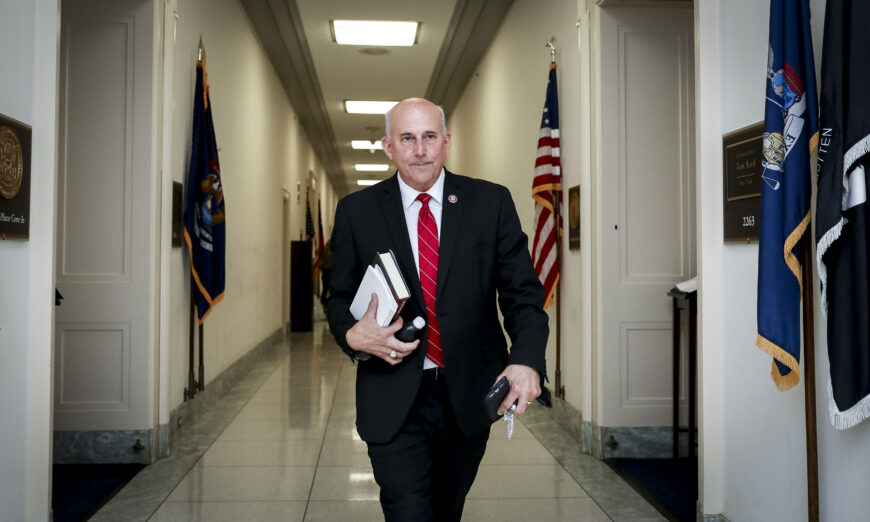 As he prepares to depart Congress, Rep. Louie Gohmert (R-Texas) urges Health and Human Services (HHS) to establish a Vaccine Injury Table, as required by law.

In a statement issued exclusively to The Epoch Times, Gohmert said: “It is asinine that despite the fact that our government and pharmaceutical companies fast-tracked the production of an experimental vaccine and forced millions of Americans to take it or risk losing their jobs or freedom, that a vaccine injury table disclosing known side effects of the vaccine as required by law has yet to be developed for the COVID-19 shot.”

According to U.S. Code 247d-6e (5)(A): “The Secretary shall by regulation establish a table identifying covered injuries that shall be presumed to be directly caused by the administration or use of a covered countermeasure and the time period in which the first symptom or manifestation of onset of each such adverse effect must manifest in order for such presumption to apply.”

Even when someone suffers a side effect known to be caused by the vaccine, Gohmert said “the government is making it as difficult as possible to be compensated for the damages.”

In a Nov. 16 letter obtained exclusively by The Epoch Times, HHS Secretary Xavier Becerra and Health Resources and Services Administration (HRSA) Administrator Carole Johnson are advised by Gohmert and four other members of Congress that “no COVID-19 countermeasures injury table has been established to date.”

“This failure” on the part of the HRSA, Gohmert said, “is deeply concerning to many members of Congress and the American citizens they represent.”

As things stand, Gohmert said the burden of proof to demonstrate injury or death as a result of receiving the COVID-19 vaccine under the Countermeasures Injury Compensation Program (CICP) is shifted to “the aggrieved individuals” who suffer injuries that federal health authorities acknowledge could have been caused by the vaccines.

‘HHS Has a History of Long Delays’

Aaron Siri, a civil rights and vaccine injury attorney and Managing Partner for the law firm of Siri-Glimstad, is not surprised that HHS/HRSA is taking their time with complying with the law.

“HHS has a history of long delays and improper amendments to the vaccine injury tables it controls,” Siri told The Epoch Times, explaining that adding injuries to the table makes it harder for it to defend against such claims and likely results in additional claims being filed, which is contrary to HHS’s mission to reduce claims and the amount paid for each claim. “By listing an injury on the table, it creates a presumption that the vaccine did cause that injury, thus shifting the burden to HHS to show that the vaccine did not cause the injury. They obviously don’t want to do that.”

Siri noted that when the National Childhood Vaccination Injury Act was established in 1986, there were only three routine childhood vaccines: Measles, Mumps, and Rubella; Diptheria, Tetanus, Pertussis; and Oral Polio Vaccine—and the manufacturers “were facing enormous financial losses from lawsuits for injuries caused by these vaccines.”

To afford some relief to those seriously injured by vaccines, they created the National Vaccine Injury Compensation Program (NVICP). People cannot sue Pfizer, GSK, Sanofi, and other vaccine manufacturers for childhood vaccine injuries. Instead, they have to sue the federal government, the secretary of HHS, through the United States Federal Court of Claims for any injuries caused by vaccines in a program that has many serious constraints impacting the ability of these individuals to obtain compensation and where they must battle against the Department of Justice which fights every vaccine injury claim.

As described by the United States Court of Federal Claims, the National Vaccine Injury Compensation Program (Part 2 of the National Childhood Vaccine Injury Act of 1986) became effective Oct. 1, 1988, and “establishes the Vaccine Program as a no-fault compensation program whereby petitions for monetary compensation may be brought by or on behalf of persons allegedly suffering injury or death as a result of the administration of certain compulsory childhood vaccines.”

In addition, where the government’s National Childhood Vaccination Injury Act of 1986 gave effective immunity to manufacturers for vaccine injury, the immunity provided under the PREP Act, which HHS granted to COVID-19 vaccine manufacturers on March 17, 2020, gives them even greater immunity in that they can also not be sued for efficacy and other issues, as well as safety issues. It also does not even provide the ability to bring claims to the National Vaccine Injury Compensation Program.

Instead, it relegates those alleging they are injured by a COVID-19 vaccine to an even more constrained program—the Countermeasures Injury Compensation Program—which is effectively a black box in which an HHS agency decides on claims without any adjudicatory process.

“The PREP Act provides that the public can’t sue vaccine manufacturers with regard to COVID-19 vaccines for almost anything related to these products, not just safety issues” Siri explained.

Now individuals injured by COVID-19 vaccines have to file in the Countermeasures Injury Compensation Program, a program administered by an agency within HHS.

“In this program, you don’t get a judge. No jury. No court.” Siri noted. “You’re submitting your claim directly to an agency within HHS. In other words, you are filing your claim with the people who pushed this product, mandated this product, told you it was safe, and who want to pay out for as few vaccine harms as possible and pay as little as possible.”

Gohmert noted: “not only has the government paid billions for the vaccines that did not and do not stop the spread of COVID-19, nor prevent the disease as we were told, but current U.S. law protects the makers from liability for any damages that they knew would be caused.”

‘They Have Rigged the Rules’

“There is no reason to believe HHS won’t rig the rules for deciding on COVID-19 vaccine injury claims in the same way they rigged the rules in the vaccine court since its establishment in the late 1980s. HHS, which controls the content of the vaccine injury table for vaccine court has, for example, taken a shortcut for defending claims for injuries by simply amending the table to narrow the definition of the injury in the qualifications and aid to interpretation if too many claims or too much compensation is being paid for a given injury,” Siri said.

According to U.S. Code § 300aa–22, “No vaccine manufacturer shall be liable in a civil action for damages arising from a vaccine-related injury or death associated with the administration of a vaccine after October 1, 1988, if the injury or death resulted from side effects that were unavoidable even though the vaccine was properly prepared and was accompanied by proper directions and warnings.”

Moreover, Siri said if HHS ever creates a vaccine table for COVID-19, there is little doubt it will not reflect all of the injuries from this product that the scientific literature supports.

“They don’t want to shift the burden to themselves with regard to even known injuries from COVID-19 vaccines,” Siri explained. “By creating the table, they would be putting themselves in a position of increasing the number of claims that will be filed for those injuries and making it more difficult for them to not grant compensation for those injuries.”

But since HHS wants as few claims as possible and to pay as little as possible, Siri said they are likely to add as few injuries as possible to the table and define them as narrowly as they can without looking entirely like they are trying to rig the system.

“HHS also has a policy of promoting vaccinations and so anything that casts doubt on the safety of the shots cuts against that policy, including adding injuries to any vaccine injury table they administer,” he said.

As Gohmert explained: “there must be concerns [at HHS] that when the American people find out that side effects were caused by the vaccines that they were told did not cause such conditions, people will be livid at the purveyor of the misinformation, as well as the damage and death.”

“The ultimate result is people who followed their government’s demand, took the vaccine only to suffer terrible side effects, have been shut out from remuneration from pharmaceuticals with their new multi-billions of dollars in profit,” Gohmert said. “Further, the government that forced the vaccination will not follow their own law and disclose the actual damages caused by the vaccines so that [injured] Americans can get some help with financial damages resulting from the vaccines.”

“It is imperative that Health Resources and Services Administration (HRSA) follow the law and immediately create a vaccine injury table for the COVID-19 vaccines so that Americans can have some proper recourse for this dangerous shot that so many were coerced to obtain,” Gohmert concluded.

The Epoch Times reached out to HHS for comment.