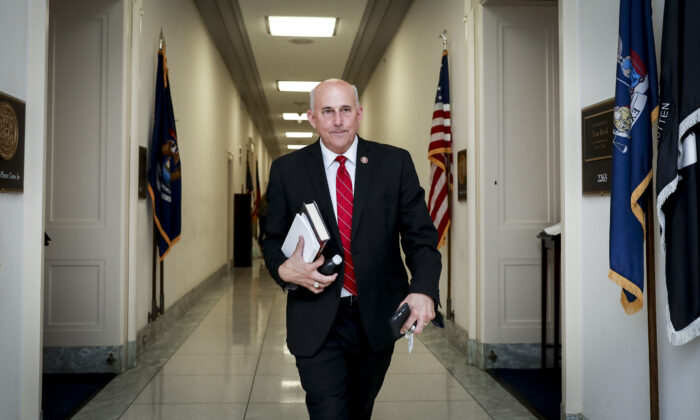 In the wake of the assault of several Jan. 6 prisoners and subsequent lockdown at the District of Columbia jail, United States Rep. Louie Gohmert (R-Texas) is demanding a welfare check on the inmates.

As reported by The Epoch Times, “It began without warning. A Jan. 6 prisoner had emerged from his cell without a mask. When it was all over, the jail was in lockdown and several inmates had been pepper sprayed, handcuffed, and thrown into solitary confinement. Inmate tablets were quickly confiscated, but not before several prisoners had time to send text messages, exposing the brutal truth of what happened.” Many of those messages were obtained by The Epoch Times. According to one text message, “[Expletive] just went down” at the Correctional Treatment Facility (CTF) in Washington, D.C., around 9:46 a.m. on the morning of Sept. 5.

The perpetrator of the alleged assaults was Lieutenant Crystal Lancaster, the guard in charge of the solitary confinement area known as “The Hole” at the CTF. One of the assaulted prisoners was Ryan Nichols.

According to a habeas petition (pdf) filed with the United States District Court, District of Columbia by Nichols’s attorney, Joseph McBride, Lancaster “verbally and mentally abuses inmates.” Lancaster “also oversees officers and guards who do the same, and is suspected of bringing drugs into the prison.” Lancaster, notorious among Jan. 6 prisoners and their family members for being particularly vulgar and brutal, had been banned from the Jan. 6 pod for verbal abuse and for stealing the inmates’ mail, according to the wife of one of the inmates. It is unclear why she was in the J6 pod at the time of the alleged assaults.

The D.C. facility itself has a long history of sub-human conditions.

In exclusive interviews with The Epoch Times, the wife and father of Ryan Nichols said this wasn’t the first time Nichols was abused by the guards at the DC jail. The last time Nichols was thrown into solitary confinement was in retaliation for the Habeas petition, in which Lancaster was called out for being abusive to the prisoners and for her suspected role in bringing drugs into the jail.

In the early morning hours of Sept. 7, two days after the assault on her husband and the other prisoners, Bonnie received a heartbreaking series of text messages from her husband describing both his physical and mental state as he sat in solitary confinement.

“[Rep.] Loui Gohmert has already done everything he can do,” Nichols’s father Don told The Epoch Times. Nichols’s wife, Bonnie said Gohmert “has been doing more than anyone else has.”

The Epoch Times reached out to Rep. Gohmert’s office on Sept. 8, providing him with the screenshots of the text messages being sent to Jan. 6 prisoners to their family members during the assault. In a letter dated Sept. 12, (pdf) obtained exclusively by The Epoch Times, Gohmert lambasted Ronald Davis, director of the United States Marshals Service in Washington, D.C., for the ongoing and unchecked abuse of Jan. 6 prisoners at the DC Central Detention Facility and the apparent efforts to cover it up.

“Although you have now sent two letters expressing your confidence in the District of Columbia Department of Correction’s detention and safety standards, the ongoing conditions and circumstances continually reported by the prisoners at the DC Central Detention Facility … present a clear conflict between your assessment and that of those being detained,” Gohmert wrote. “For this reason, another welfare check needs to be conducted to ensure that my constituent, Ryan Nichols, an honorably discharged Marine Corps veteran with Post Traumatic Stress Disorder, and all other prisoners are safe and not presently at severe risk of bodily harm and even death.”

Gohmert also advised Davis that the same day his office received his most current response, “expressing confidence in the DC facility,” was the same day Gohmert was “provided details regarding the apparent assault” on the Jan. 6 prisoners, “which ended in a lockdown with at least three prisoners being pepper sprayed and thrown into solitary confinement.”

To further demonstrate the lack of “accountability for abusive and violent staff,” Gohmert also noted how the prisoners’ tablets and electronic grievance system were turned off.

“This is patently wrong,” Gohmert wrote, “and I sincerely hope that you will not dismiss these very serious reports coming directly from the jail and substantiated with photo evidence.”

Gohmert also admonished Davis for the “violation of policy in relation to Use of Force and the Use of Chemical Munitions.”

“Even passive resistance, which was not displayed in this incident, does not and should not authorize a staff member to so viciously use chemical munitions,” Gohmert wrote, adding that he has been warning them of “the hostility and outrageous punishment that is still being unconstitutionally dished out by very hateful jailers in authority.”

‘All Is Not Well’

In an interview with Gohmert regarding the DC jail incident and his subsequent letter to Davis, the Texas congressman expressed frustration with the repeated assurances by Davis that “all is well.”

“It wasn’t well at all then and it’s not at all well now,” Gohmert asserted. “He was saying, ‘you can have confidence,’ and that’s what fired me up. These people are being mistreated. His ‘confidence’ is completely misplaced.”

“Whether you want to call it torture or abuse,” Gohmert said the things these guards can get away with in a United States prison is outrageous. “It’s just wrong,” he said, adding that when you have a U.S. marshall saying “all is well,” the people being abused have no recourse for the wrongdoing. He also expressed disdain over the evidence that shows both Lancaster and Kathleen Landerkin—the deputy warden at the D.C. Jail, “who hates conservatives with a passion, especially if they like Donald Trump”—are allowed to abuse the Jan. 6 prisoners with no accountability.

According to a Dec. 16, 2021 letter (pdf) sent by Rep. Marjorie Taylor Greene (R-Ga.) to Muriel Bowser, mayor of the District of Columbia, Landerkin has “demonstrated a consistent pattern of disrespect for Members of Congress and fellow corrections staff, in addition to displaying a public animus toward anyone who supports President Donald J. Trump.

The fact that Davis appears “to be satisfied” with the conditions and treatment of prisoners at the DC facility has Gohmert “deeply concerned.”  The endeavor by Davis to “confidently report that all is well” when so many things are “so obviously wrong” reminds Gohmert of the “blindness of superiors at Abu Ghraib just before the truth came pouring out.”

‘Reports of Abuse and Even Torture’

To Gohmert, there has never been a time in United States history when Americans were treated so horrifically simply because they disagreed with those in political power. He described the hubris of those who say they are against the abuse of human rights around the world but see the treatment of Jan. 6 prisoners as acceptable.

“That was an act of abuse,” Gohmert insisted about what happened at the D.C. jail. “It is a blot on the American record. It’s a blot on our reputation around the world.”

He is also convinced that recent remarks delivered by President Joe Biden have signaled approval of this sort of abuse and encouraged more hostility against anyone who dares to support Donald Trump or to embrace the movement to Make America Great Again, otherwise known as MAGA. He recalled how Hitler used similar language to turn the nation against Jews in order to make it acceptable for the atrocities inflicted upon them.

“It’s like with Democrats right now, whatever you do to conservatives is not enough,” Gohmert lamented. “It’s exactly how Orwell paints it in 1984.”

“As an elected official and a member of the human race, I cannot sit idly by and hear these reports of abuse and even torture and accept that these are realities that we as citizens must accept in the United States of America in 2022,” Gohmert concluded in his letter to Davis. “Therefore, I once again urge you to act as if there are lives depending on the accuracy and personal prudence of your analysis, because they are.”

The Epoch Times reached out to Davis for comment.