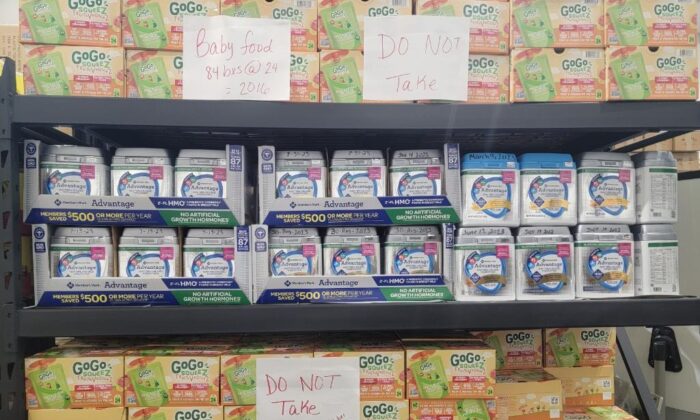 A photo of baby formula sent to the border by the Biden administration, taken by border patrol agents and sent to Rep. Kat Cammack (R-Fla.) on or around May 10, 2022. (Courtesy of Cammack)
Republicans

EXCLUSIVE: Rep. Cammack on Why She Exposed Pallets of Baby Formula Sent to Border

'This is what America last looks like."
By Patricia Tolson

As the baby formula shortage escalates across the United States and American parents struggle to feed their children, Rep. Kat Cammack (R-Fla.), the youngest Republican woman in Congress, went live on social media on May 11 to drop a bombshell. Photos she had received that morning from Border Patrol agents at the Ursula Migrant Processing Center in McAllen, Texas, show pallets of baby formula are being delivered to the border.

“What is infuriating to me,” Cammack shared in a follow-up video on social media that day, “is this is another example of the America last agenda.”

In an exclusive interview with The Epoch Times, Cammack shared her frustrations regarding the suffering of America’s mothers and children, as well as the abuse suffered by the children of illegal immigrants being trafficked by drug cartels.

“I received a couple of text messages from border patrol agents down at the southwest border,” Cammack said. “I communicate with them regularly. They sent me some messages as well as some photos. They are just in shock about the news about the shortage of baby formula across America while they’re taking in pallets of baby formula at the border, so they were bringing it to my attention.”

Cammack declined to reveal the identities of the border patrol agents who sent the photos.

“Because of all of the attention about what is going on right now, the headquarters office has now created a policy saying they are no longer allowed to take photos in the warehouse,” she explained, adding that “for their protection,” she could not disclose the names of the border agents who sent the photos.

While she could not determine how many containers of formula were on each pallet—and noted she is looking into getting those numbers—Cammack said “one particular processing facility got notice. They would be receiving three additional pallets in the next few days.” That is in addition to what is shown in the photos she has already received.

“What I have seen is a stockpiling,” Cammack asserted, noting that the Biden administration assigns the National Guard to maintain the inventory. “It is absolutely mind-boggling.”

When she shared the photos of what was happening at the border, Cammack said she felt like she was “screaming in the wind.”

That morning, Cammack said someone on her team sent photos from a Target in Ocala, Florida. She said they reported a big sign saying, “attention customers, effective immediately, all infant formula sales are limited to five units per child for each customer per day.”

“My team took a picture of the shelves, and it’s pretty bare,” Cammack said.

“When I talk to some of the nurses and doctors back home in the district, they say they’re seeing an uptick in the number of [Emergency Room] visits for infants because mothers are now giving their children a new formula,” Cammack said. “They’re getting sick. They’re having allergic reactions.”

As someone whose age group is predominantly affected by this, Cammack said this is something mothers from all over the country are contacting her about.

“Mothers cannot find the formula that they need for their children,” she said. “When I think about what’s happening on the border, this is 100 percent Biden’s fault. It’s Biden’s FDA that shut down the manufacturing of baby formula out of one of our plants, and there’s only four major plants that operate and produce this baby formula, and the FDA has been dragging its feet on this.”

Written in an 11-page letter (pdf) signed by 107 members of Congress and addressed to President Joe Biden and FDA Commissioner Robert Califf on May 11, “the formula shortage has reached crisis levels in recent weeks.”

“The share of baby formula ‘out of stock across the U.S. hit 40 percent on April 24’ and a ‘total of 26 states have out of stock rates of 40 to 50 percent,'” the letter states. “Notably, CVS, Walgreens, and Target are among the stores putting limits on how much formula customers can buy at one time. Additionally, there is concern over how this may impact parents participating in the Special Supplemental Nutrition Program for Women, Infants, and Children (WIC), who rely on the program’s supply of baby formula for their infant’s nutritional needs.”

The letter further addresses how Abbott Nutrition had “voluntarily recalled formula produced in its Sturgis, Michigan facility following reports of infant hospitalizations and death.” The facility was subsequently shut down by the FDA, pending an investigation However, a link has yet to be established between the formula produced at the Sturgis facility “and the sickened infants.”

While the FDA announced on April 29, 2022, it did not object to Abbott Nutrition releasing specialty and metabolic formulas produced at the Sturgis facility on an emergency case-by-case basis, the letter notes how “the FDA has still not cleared the facility to resume the vast majority of its infant formula production,” and “the prolonged shutdown of the Sturgis facility without any public backup plan by the administration has greatly exacerbated the current shortage.”

“That’s one part of this,” Cammack explained. “The other part is Biden has failed to address the supply chain, which is completely and utterly broken. When you factor in inflation and the cost of everything right now, over 8 percent, people are really struggling. Of course, with the stroke of a pen, Biden created this border crisis. I can’t even bring myself to call him the commander-in-chief. To me, he’s the trafficker-in-chief because he has perpetuated this border crisis. I have been there three times. I have held these children.”

Cammack shared the horrific story of a 9-year-old little girl she met on one of her three border tours. The child was in one of the processing facilities.

“She couldn’t even tell me her name,” Cammack reflected. “Her vocal cords had given out from screaming because she was being gang-raped by members of the cartel and border patrol agents saved her in the middle of a field. These children are being used. They’re being used as pawns, and shame on Biden for this. He is directly responsible for the empty shelves in America and he is directly responsible for these children being used as pawns, being trafficked and recycled at the border.”

Asked if there was any advice she wanted to share with American mothers who are struggling to find formula to feed their own children, Cammack suggested “this is a really good time for ‘We the People’ to band together, not as Republicans or Democrats, but as Americans and stand up for America First policies. One thing [we] should do is shut down the switchboard at the White House. Call the White House and let them know that mothers across America will not stand for this.”

“This is not the fault of the children at the border,” Cammack said. “But we have American mothers who are struggling to find help. They’re struggling to find formula and they can’t. The supply chain on this has been broken and exacerbated by the fact that we have shipments of baby formula being sent to the border. This is a tough situation. It’s an emotional situation. But this administration is directly responsible for it and people need to recognize that it can only be turned around by having the White House address the problem by coming to the table to do something about it.

“I just couldn’t believe that American mothers who are struggling to feed their children, their tax dollars are being used to pay for baby formula that’s being sent to the border,” said Cammack. “It’s not the fault of the children at the border. But it’s not the fault of the American mothers either. Something has to give and I think the Biden administration bears great responsibility in this situation. This is what America last looks like.”