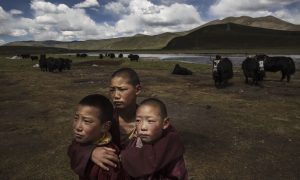 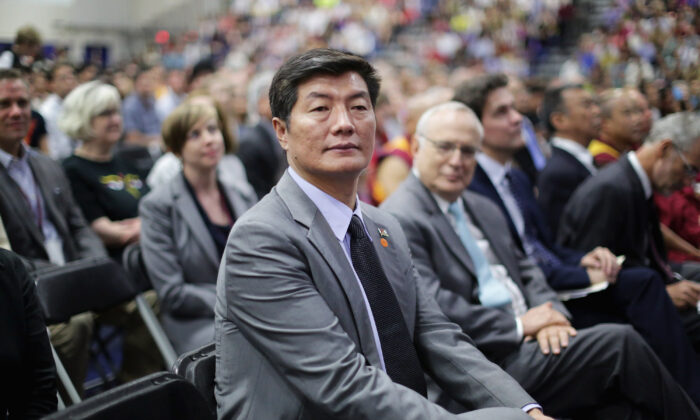 Lobsang Sangay, the president of the Tibetan government-in-exile, attends an event with the Dalai Lama at the Bender Arena on the campus of American University in Washington on June 13, 2016. (Chip Somodevilla/Getty Images)
India

NEW DELHI—The world must understand the issue of Tibet to be able to understand what’s happening in contemporary China, the president of the Central Tibetan Administration (CTA), also called the Tibetan Government-in-Exile, says.

“Unless you know Tibet, you won’t fully understand China,” Dr. Lobsang Sangay told The Epoch Times in an exclusive email interview from his base in Dharamshala, India, the seat of the CTA. “Study Tibet to fully understand what the Chinese Communist Party is really capable of.”

Sangay attended a formal meeting at the U.S. State Department in a first-of-its-kind initiative in six decades on Oct. 15, immediately after the appointment of Robert A. Destro as the special coordinator for Tibetan issues. He said that he and Destro discussed the critical situation inside Tibet and also about the recent report about mass labor camps in Tibet.

“We also discussed the importance of renewing dialogue between the envoys of His Holiness [Dalai Lama] and the Chinese government. I urged the U.S. government and Special Coordinator Destro, to press China on it. We further discussed the swift passage of the Tibet Policy and Support Act 2019 at the Senate,” he said while in quarantine in Dharamshala, which is 300 miles north of India’s capital of New Delhi.

Sangay said he isn’t surprised by the Chinese Communist Party (CCP) calling the meeting between Sangay and Destro a “move aimed at destabilizing Tibet.”

“China should realize that Tibet has been and is destabilized because of its repressive policies. China should be able to see that a meaningful dialogue with the envoys of His Holiness, based on the Middle Way Approach [MWA], is the only way to resolve the Tibet issue,” he said.

“China for the past six decades has failed to achieve stability and unity that it sought through its repressive policies. It has not achieved it in the past 60 years and it’s not going to achieve it in the future unless the Tibet issue is resolved peacefully,” he said, adding that the Tibetan issue and the Middle Way Approach (MWA) has received bipartisan support in the U.S. Congress and Trump administration.

“Of late, China’s growing economic might has forced many countries and leaders to pursue economic interests ahead of human rights and justice. However, past U.S. presidents since George Bush Sr. have hosted His Holiness the Dalai Lama, and prioritized human rights issues, including the critical situation inside Tibet,” Sangay said.

He said the CTA will offer “peacebuilding efforts” to whoever wins the U.S. election and will also seek assistance in resolving the Tibet issue peacefully through MWA-based dialogue.

‘Either We Transform China or China Transforms Us’

Sangay says China changed economically without “political liberalization,” and he hopes after the CCP virus pandemic, all democratic nations will come together to confront the regime in Beijing.

“The like-minded nations who value justice, freedom, equality, and above all democratic ways must come together to challenge the China threat,” Sangay said in an email.

“Either we transform China or China transforms us,” he said recently at the Vaclav Havel Human Rights Symposium on China.

“It’s not going to be easy and the world cannot wait in hope that China will transform,” Sangay told The Epoch Times. “Today, more than ever, the world has learned the hard way that China is a threat to global human rights and democracy among many other things.”

Sangay, who studied international law and democracy at Harvard University, said China has been exporting its “tactics of soft power and hard power diplomacy” to other democratic countries for its own political agendas.

“China in the post-COVID world is not going to be very different from China in these COVID times,” he said.

“Just this month, China won a seat on the U.N. Human Rights Council, despite being one of the world’s worst violators of human rights. Even at a time when the world is in the grips of the pandemic, China is assiduously redefining international human rights norms and disrupting all efforts that would hold China accountable for its human rights crimes at home and elsewhere.”

Sangay says that after the pandemic, he hopes the world will have learned its lesson that the democratic world needs to protect transparent systems from authoritarian regimes such as China, by employing freedom of speech and free media.

China’s aggression on the Himalayan border with India has caused tensions throughout the entire region, Sangay said.

“China’s aggressive maneuvers are being felt and witnessed around the globe. The kind of aggression that we saw this time at the border is very concerning,” he said. “I have said this before and I say this again, this is not the first military aggression and this won’t be the last.”

Sangay said India has been cordial toward China despite its decade-long aggression and intrusions on the border and China has never reciprocated.

He said after the bloody, “unfortunate” event at the India-China border at Galwan on June 15, China left India with no other choice but to take hard steps.

“Most importantly, a renewed, robust policy that ensures reciprocity in all its dealings with China and building strategic partnership with like-minded nations is a step in the direction,” he said.

“All the nations must ask this question: Are we prepared to risk another global health crisis?” in the post-COVID-19 world.

“Hopefully, by the end of this pandemic, the world will have learned the lesson that democratic and transparent systems with freedom of speech and free media need to be protected against authoritarian regimes, so that the free world countries can together successfully conquer any future pandemic or crisis,” Sangay said.

He said the Tibetans have worked persistently to strengthen their cause over the past six decades and that will continue post-COVID-19 as well.

“Our priorities have always been resolving the issue of Tibet through meaningful dialogue and see the rightful return of His Holiness to Tibet. And it will be our priority now as well as until it manifests despite any challenges that we may come across.”