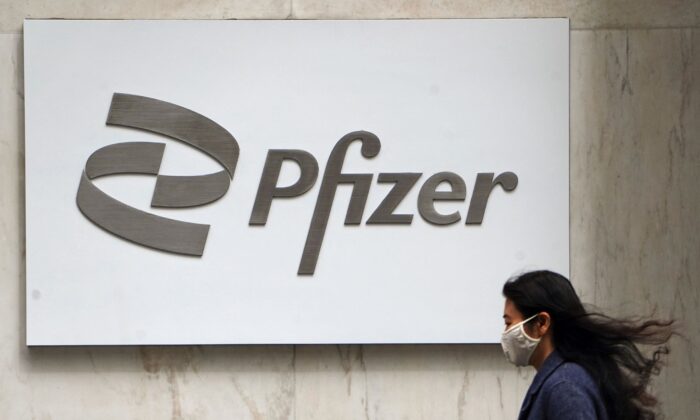 A person walks past a Pfizer logo in the Manhattan borough of New York on April 1, 2021. (Carlo Allegri/Reuters)
US Features

Pfizer can’t use the government as a shield from liability for making false claims about its COVID-19 vaccine, lawyers for a whistleblower argued in response to Pfizer’s motion to dismiss a False Claims Act lawsuit.

“Respondents claim fraudulent certifications, false statements, doctored data, contaminated clinical trials, and firing of whistleblowers can be ignored based on the theory that they contracted their way around the fraud,” lawyers for Brook Jackson, who worked as regional director at one of the clinical trials used to develop the Pfizer vaccine, wrote in their Aug. 22 court filing.

“A drug company cannot induce the taxpayers to pay billions of dollars for a product that honest data would show poses more risks than benefits, and that ignores the actual contract and the law itself.”

Jackson’s lawsuit alleges that Pfizer and two of its subcontractors violated the False Claims Act by providing bogus clinical trial results to garner Food and Drug Administration (FDA) approval of its COVID-19 vaccine.

Under federal law, individuals can sue on behalf of the government and win treble damages if they can prove an individual or company deliberately lied to the government.

One of Jackson’s attorneys, Warner Mendenhall, told The Epoch Times that the payout could be as much as $3.3 trillion.

“It would be enough to bankrupt Pfizer,” he said.

Mendenhall, whose law firm has won multimillion-dollar False Claims Act cases, based his estimates on the more than $2 billion the U.S. government has paid Pfizer for more than 100 million doses of its COVID-19 vaccine.

In motions to dismiss the lawsuit, Pfizer and its subcontractors argued that besides Jackson’s allegations being false, the government, not a private citizen, can initiate a False Claims Act complaint and the lawsuit against them should, therefore, be dismissed.

“The Relator may not pursue the claims against Pfizer without the Government first pursuing them in an administrative proceeding,” Pfizer’s motion reads.

The companies also argued that the FDA was well aware of Jackson’s claims for at least two years before the lawsuit was filed against them and that it publicly responded to Jackson’s allegations by expressing the agency’s “full confidence” in the data used to support the vaccine.

However, Mendenhall said a false claims action is independent of the government’s knowledge and that Jackson only has to prove Pfizer and its subcontractors presented fraudulent information to the FDA.

Jackson was third in command of the clinical trials conducted by Ventavia Research Group as part of Pfizer’s application for emergency use authorization for its COVID-19 vaccine. She was there for only 18 days before being fired by Ventavia after reporting what she called “absolute mayhem” and an utter disregard for safety protocols and federal regulations in developing the vaccine.

She has submitted more than 400 exhibits as part of her complaint. She said a former Taco’s cashier was among those tasked with injecting patients with the experimental vaccine. She alleged that the trial staff falsified patient signatures on informed consent paperwork. And she has described a daily mess of unsanitary conditions.

Jackson also responded for the first time to Pfizer’s characterization of her as an anti-vaccine, anti-government individual out for money as vengeance for her firing.

She has worked on a long list of government-run clinical trials for vaccines and said she’s pro-vaccine. She pointed out that her children have had all their childhood vaccines and that her entire family gets the flu vaccine yearly. She received the COVID-19 vaccine as soon as it was available and was initially one of its biggest cheerleaders.

While she’s seeking compensation for her termination as part of her actions against Pfizer and the other companies, Jackson said she plans to donate any money she receives under her legal action against the companies to those injured by the vaccine.

“As far as I’m concerned, it’s blood money,” she said. “The world should be disgusted by what went on here with the shameful actions behind this dangerous vaccine.”

Pfizer is no stranger to False Claims Act litigations.

In 2009, the pharma giant agreed to pay $2.3 billion in settlement fees in the largest health care fraud case brought under the False Claims Act in U.S. history. The U.S. Department of Justice filed the lawsuit against Pfizer for misbranding one of its drugs with “the intent to defraud or mislead.”