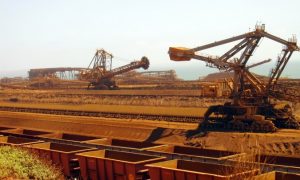 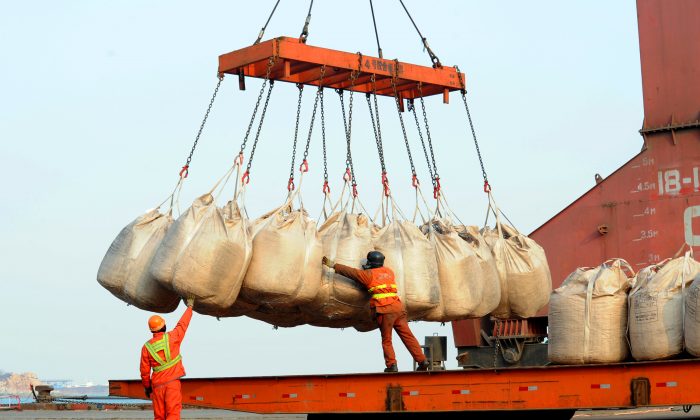 Workers unload goods from a ship at the port in Lianyungang, east China's Jiangsu province on February 12, 2014. (STR/AFP/Getty Images)
Business

In the third quarter of this year, China Beige Book’s survey of thousands of companies provided a glimmer of hope for the Chinese economy. It painted a picture of stability rather than collapse.

In the fourth quarter, this is no longer the case.

China Beige Book (CBB) collects data from thousands of Chinese firms every quarter including some in-depth interviews with local executives. Although the CBB does not give definitive growth numbers, it logs how many companies increased their revenues or for how many sales declined.

Some policy choices simply will not work. … It’s past time the ‘stimulus mafia’ rethinks its Pavlovian responses. Reform or bust.
— China Beige Book

“Both manufacturing and services performed poorly, with revenues, employment, capex, and profits weakening in each. The popular rush to find a successful manufacturing-to-services transition will have to be put on hold for a bit,” the report states.

So even if the companies don’t say how much profits increased or decreased, the CBB sample provides an accurate snapshot of where firms are headed on aggregate.

“This is one quarter, it’s not yet a trend. But the data are interesting and different enough to raise at least  a yellow flag right now,” said Leland Miller, president of CBB.

The price level also changed for the worse. Whereas growth slowed down throughout the year, prices were flat to stable. Not this quarter. “Gains in input prices, sales prices, and wages all hit the lowest levels CBB has ever recorded,” the report states. “For the first time, it looked like firms were encountering genuinely harmful deflation.”

Falling prices, whether it is commodities, real estate, or wages, indicate there is too much supply. Falling prices resulting from gains in productivity aren’t bad. It’s bad if they fall because of oversupply, which makes servicing debt a lot harder.

So the last man standing is the labor market, long known to be the most important factor influencing the decision makers in Beijing. If the CBB analysis is true, the situation is also far worse than expected.

As a reminder, reliable employment data is notoriously hard to come by and may be the most unbelievable of all of the official data out of China. The official unemployment rate has hovered around 4 percent (4 percent to 4.3 percent, to be precise) for the last 10 years.

“Job growth took a pronounced hit, while labor supply (both skilled and unskilled) became less available. … If labor market weakness persists, Beijing will feel increasing pressure to ramp up its policy response,” the report states. Judging from the fiscal deficits China started to run this year, it may already be feeling the pressure, as 16 percent of companies surveyed fired people.

The mining sector also suffered, with more firms reporting decreases in revenue rather than increases.

CBB, however, finds that both monetary and fiscal stimulus don’t work, as two classic outlets for government spending (transportation and transportation construction) had profits disappear and revenues plunge. The shipping industry fared the worst, with more companies reporting a drop in revenues rather than an increase.

On the monetary side, China cut interest rates six times this year, but CBB said the credit transmission mechanism is broken, because companies don’t want to borrow. “The share of firms borrowing hit a record low of 14 percent, despite a lower cost of borrowing from banks,” the report states. Over the four years of the survey’s existence, the percentage of firms that said they were borrowing money fell by two-thirds.

This is “good for restructuring, bad for short-term growth.” Not surprisingly, the number of firms reporting an increase in capital expenditure also fell to a record low.

In financial markets, the CBB report shows a remarkable decline in appetite for credit, as yields rose to 9 percent and issuance halved compared to the third quarter. Safer bank loans yield less compared to last quarter, where riskier non-bank loans yield more. A classic case of selective lending only to safe creditors who don’t need any money.

Another relative positive was retail spending, which increased at 46 percent of the firms, but the increase was lower than in the last quarter. So the consumer is not dead, but it’s also not coming to the rescue as policymakers would have you believe.

As the Epoch Times reported recently, the regime is stimulating on all fronts to stem the tide. But CBB is not too optimistic that it will work out and urges the regime to really reform the economy.

“Some policy choices simply will not work. … It’s past time the ‘stimulus mafia’ rethinks its Pavlovian responses. Reform or bust.”

About the China Beige Book: The China Beige Book uses quantitative and qualitative data to track on-the-ground sentiment as it changes from quarter to quarter across China’s industries, key subsectors, and regions. The quarterly report regularly surveys over 2,100 firms and 160 bankers across China, in addition to conducting in-depth interviews with C-suite executives throughout the country.