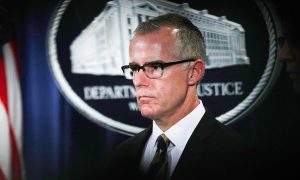 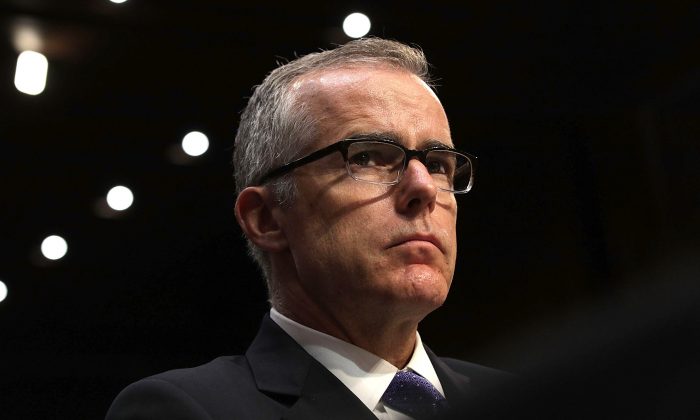 Andrew McCabe, the former deputy director of the FBI, told House lawmakers during a closed-door interview in late 2017 that other than the probe into Hillary Clinton’s unauthorized use of a private email server, he wasn’t aware of any instance in which an FBI exoneration statement was drafted months prior to the conclusion of an investigation.

“This is the only time that I am aware of, sir,” McCabe told a lawmaker, who asked him if it was “common practice” to lay out an exoneration statement two months prior to concluding an investigation, according to a transcript obtained by The Epoch Times.

Then-FBI Director James Comey had circulated a draft exoneration in May 2016—two months prior to concluding the investigation.

Representatives and staff from the House Judiciary and Oversight committees grilled McCabe during an eight-hour session on Dec. 21, 2017. Two days later, McCabe announced his retirement. McCabe was forced to resign from his active position on Jan. 29, 2018, and on March 16, 2018, the day before McCabe was to retire with a full pension, then-Attorney General Jeff Sessions fired him for lying to investigators about self-serving leaks to the media.

The Judiciary and Oversight committees wrapped up a year-long investigation last month after interviewing more than 20 witnesses, including McCabe, Comey, and former Attorney General Loretta Lynch.

The lawmakers concluded that the Obama Justice Department (DOJ) treated Clinton and then-candidate Trump unequally in 2016. While the DOJ appears to have abused foreign intelligence surveillance powers to target a Trump presidential campaign associate, its investigation of Clinton “was over before it began,” a summary released by the House Judiciary Committee states.

Comey drafted the statement to exonerate Clinton two months prior to concluding the investigation and before interviewing more than a dozen key witnesses, including Clinton herself. Among other issues, the draft was edited to remove all mentions of “gross negligence,” a statutory term in the criminal code.

McCabe: “To be clear, I did not say that I did not discuss this with Director Comey. I participated in many discussions about many things…”

McCabe: “I don’t have a clear recollection of discussing…”

Rep.: “Okay. Do you have any recollection of discussing it?”

McCabe claimed to not remember or recall certain events or matters more than two dozen times during the interview.

McCabe detailed tensions between the FBI and DOJ over how the email investigation was to be conducted. While FBI staff pushed to use subpoenas to force witnesses to answer questions and produce evidence, the Justice Department preferred to negotiate with defense lawyers.

“There were times that people in the FBI suggested and wanted to pursue, let’s say, acquiring of evidence through legal process, rather than the Department’s preferred route, which was negotiating consent to access different pieces of evidence,” McCabe said.

The investigators ultimately followed the path preferred by the DOJ.

Lisa Page, a former FBI counsel who worked on the email investigation, described similar tensions during two days of testimony in July 2018 detailed for the first time by The Epoch Times on Jan. 11.

Until now, it was believed that special counsel Robert Mueller had been solely responsible for the removal of Strzok from his team’s Russia investigation. While Mueller may have been involved, testimony revealed that it was McCabe who was personally responsible for the decision to remove Strzok from the Mueller probe. McCabe testified that he was briefed in late July 2017 on biased text messages sent by FBI Deputy Assistant Director Peter Strzok and Page.

McCabe said that the Justice Department’s Office of Inspector General contacted him on July 27, 2017, and “said they had a very important matter for me to review and they needed me to come across the street and talk to them that day, which was unusual.”

“I made the decision to remove him from the investigation that evening,” McCabe said. “I came back from my meeting with the inspector general. I met with a very small group of my fellow leaders. We discussed Peter’s reassignment, and we discussed where we would place him.”

McCabe’s view on the matter is similar to that expressed by Comey during testimony last month. Comey said he would have removed Strzok from the investigation if he’d seen the biased text messages.

“If I had known about those things that they were communicating that I’ve seen in open source, I would not have had them stay on the—playing any role in connection with that [Clinton email] investigation,” Comey said Dec. 7.

In the text messages, Strzok called then-candidate Trump an “idiot,” rooted for Clinton to win the election, and discussed an “insurance policy” in the “unlikely event” Trump won the presidency.

Page confirmed in her testimony that the “Andy” in the “insurance policy” text message was McCabe. However, during his testimony, McCabe said he didn’t know who “Andy” referred to.

Unidentified Representative: “Do you know the identity of the ‘Andy’ who is mentioned in that text message?”

Rep.: “Were there any other Andys who were working on this email investigation employed by the FBI or DOJ?”

McCabe: “I mean, not at my level and not that I’m aware of, sir, but I can’t vouch for how many Andys we have.”